Saint Eustace and his Companions 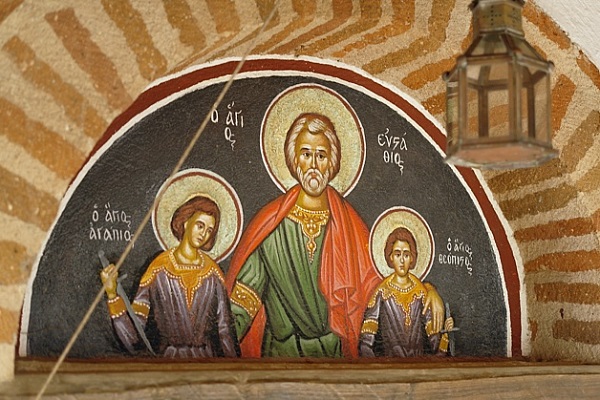 The great martyr for Christ Eustace (Eustathios) was a solider of renown in Rome at the time of the Emperor Trajan in about the year 100, and was known as the  most acclaimed of all for his virtue, courtesy, disposition, charity and sympathy towards the poor. He had previously been called Placidas and his wife was Tatiana.

When he was still enslaved to the delusion of the idols, because of his great devotion and nobility, he was deemed worthy of being called to the faith by God, as Saint Paul had been. This happened because once, when he was hunting a stag and had drawn quite close to it, he saw, between its antlers, the precious Cross, which was shining more brightly than the sun. And He saw Christ, Who was crucified for us, standing there and heard a voice which said: “Placidas, why are you persecuting me. It’s me, Christ”. He was then schooled in the ways of piety by Christ and he and all his family were baptized. Placidas was named Eustathios, his wife Theopisti; one son became Agapios and the other Theopistos. 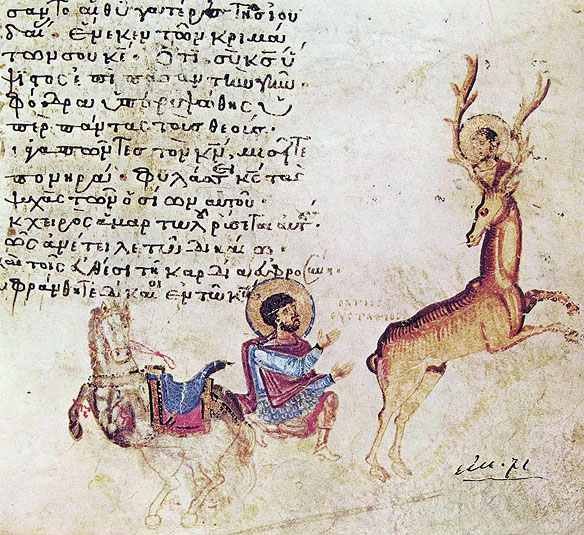 After this he was taught by Christ, who appeared to him, the temptations he was to undergo as a trial, like Job. And that he would be handed over to a demon which would test him. And so at once he, his wife and children left all their possessions and their homeland. On the voyage, he was robbed of his wife by the captain, a barbarous and brutal man. Both his children were taken by wild animals as they were crossing a river. Despite this, through Divine Providence, the wife and children were kept safe and sound. Eustathios thereafter worked for a wage and lived the life of a labourer, though he’d once been rich and an officer. But he suffered this bravely, with an adamantine spirit, for no short length of time.

But since it happened that barbarians attacked the Roman lands, a search was made for someone who could be of assistance in this barbaric war. Then the emperor remembered bold Eustathios with his former feats and victories. A search was organized throughout the world, though Eustathios was barely remembered by the emperor’s men, who were astonished at the miserable picture he presented and the poor condition in which he found himself.

When he’d been presented to the emperor and honoured magnificently by him, he regained his former rank. He led the campaign against the barbarians and routed them utterly.

On the way back to Rome after the war, by the dispensation of our ingenious God, he found his wife and children again and recognized them. So God was glorified by all because of the miracle He’d arranged to happen for them.

But when he got back to Rome with his wife and children, however, in 117, he found that Hadrian was emperor. The emperor rewarded Eustathios with great gifts for his victory and urged him to make a sacrifice of thanks to the gods. Eustathios replied however, that he had achieved this victory with the power of Christ, not that of the idols. This enraged the tyrant.

In the first place, he stripped him of his rank as general. Then he fed him and his children to wild lions, but when he saw that they were unharmed by the animals, he ordered that they be put into a red-hot metal contrivance in the shape of a bull. 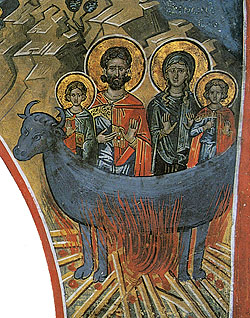 And so, on the one hand, their sacred souls were given into the hands of God, and, on the other, their holy bodies remained entirely untouched by the fire. Those who were not of the faith were moved to astonishment and to faith in Christ, whereas the Christians were moved to praise God. The faithful then took the relics and buried them with veneration.