On the Saturday of the 1st Week of Lent, we celebrate the remarkable miracle performed by the Holy and Glorious Great Martyr, Theodore the Recruit, through the kolyva.

After Konstantios, the son of Constantine the Great, the imperial throne of Constantinople passed to Julian the Apostate. He had been a Christian but became a pagan and set in motion a harsh persecution against Christians, both publicly and in secret. So this impious emperor, when he had exhausted ways of punishing Christians openly with brutality and unspeakable inhumanity, began to feel ashamed and harboured a suspicion that perhaps Christians were increasing anyway. So this treacherous and unholy man concocted ways of defiling them in ways which they wouldn’t suspect. 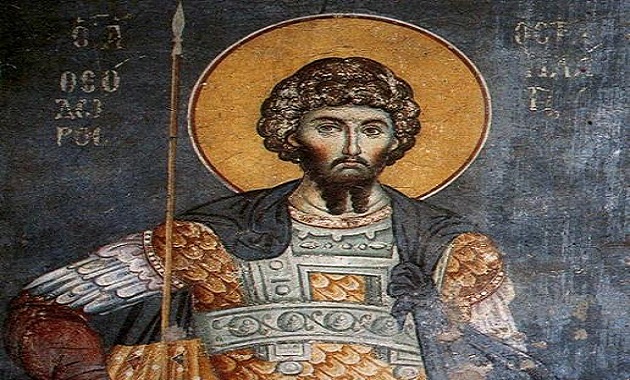 And this is what he did: knowing that the Christians purified themselves particularly through fasting in the first week of Lent and devoted themselves to God, he summoned the eparch of the city and ordered him to withdraw from the market the foodstuffs and beverages that were on sale and to substitute others, having first mixed them with blood from sacrifices. In this way he would pollute them, so that when Christians who were fasting bought and used them, they’d be defiled by the pagan sacrifices.

The eparch at once put the order into practice: he replenished the whole market with food and drink polluted by the abominable sacrifices to the idols. But the eye of God, which sees all things and lights upon those who are trying to be clever and then hoists them with their own petard, took steps to protect us and made short work of the disgraceful ploys of Apostate. And this is how. To Patriarch Evdoxios, who, was not actually all that Orthodox as regards the Faith, He sent His great champion Theodore, known as the Recruit,  because of the regiment to which he had belonged.

Saint Theodore appeared to the patriarch at a time when the latter was still awake, not in a dream, and said to him, roughly, this: “Get up at once and gather together the flock of Christ and give strict orders that no-one should buy anything at all of the food in the market, because it’s been polluted by the impious emperor, Julian, with blood from the sacrifices”. The patriarch was at a loss what to do and wondered how it would be possible for those Christians who didn’t have any supplies of their own in store not to buy from what was on offer for sale in the market.

The saint, however, told him to give them kolyva and in this way he’d satisfy their food requirements. But Evdoxios was again dumbfounded, because he didn’t know what kolyva was and had to ask to find out. The saint immediately told him: “Back in Efhaïta (Euchaita) that’s what we used to call boiled wheat”. But the patriarch wanted to establish exactly who this person was who seemed so interested in the Christian population. To this request, the saint replied: “He who has been sent to help you at this time is God’s martyr, Theodore”. The patriarch then got up at once and gathered together Christ’s flock. Once he had told them what he’d seen, he did as the martyr had suggested. In this way, he kept the congregation of the Church untainted by the repulsive machinations of our enemy and the violator of our Faith.

When Julian saw that his diabolical plan had failed miserably, he was ashamed and ordered that the market be re-stocked, with the usual food and drinks on sale. The flock of Christ, on the other hand, since the end of the first week of the fast was approaching, expressed its thanks to their benefactor the martyr, and, on the Saturday, honoured his memory with kolyva, amid great rejoicing. From that day to this, the faithful have, in a sense, kept reliving this miracle, so that the great feat performed by the martyr should not be eclipsed by time. We honour and pay our respects to God’s great martyr Theodore through the kolyva.

This great Theodore had been summoned by the commanding officer of the regiment of the Recruits, the impious Vringas, who recommended that he renounce his faith, and allowed him time to reflect. Theodore, however, wouldn’t hear of the suggestion. Not only did he refuse to deny his faith, but he also burned down the temple and the statue of Rea, the mother of the gods, having first shared out among the poor the various pieces of jewellery and votive offerings which were there. Following this, he was subjected to various dreadful tortures. Finally, they cast him into a fiery furnace, where the saint, who didn’t suffer in the slightest from the flames, gave up his spirit to God and was adorned with the crown of martyrdom. 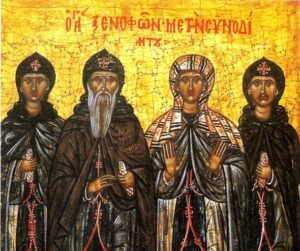 A Holy Family 27 January 2022 On 26 January, the Church celebrates and honors the sacred memory of the Blessed Xenofon and his family. Saint Xenofon, his wife Mary and their two sons, Arkadios and Ioannis, are a model of a holy family, very instructive, particularly in our own day and age. There is a general concern and anxiety that the institution of marriage and of the family... 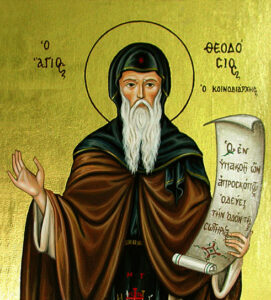 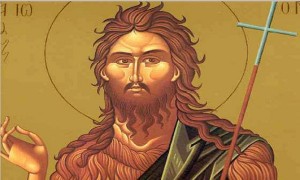 John the Baptist, the Lord’s Forerunner 7 January 2022 The Mission of the Baptist Through the texts of the Gospels, John is presented as the sole ‘prophet’ and ‘forerunner’ who was sent by God to prepare the people spiritually in view of the impending advent of the Messiah. Precisely this precursive capacity of John is given particular emphasis in the fourth Gospel: ‘There was a man sent from God whos... 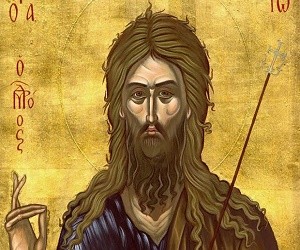 Synaxis of the Honourable Forerunner 7 January 2022 On 7 January, the Church celebrates the Synaxis of the Honourable Forerunner and Baptist, John. It is the oldest feast of our Church for John the Baptist and it came from God. God enlightened the Fathers of the Church and they appointed the day after Epiphany for us to honour Saint John, the man who baptized Our Lord. He’s the greatest saint of our... 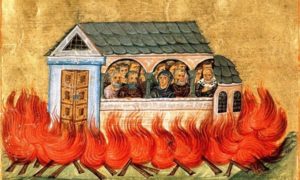 Twenty Thousand Martyrs 29 December 2021 Today’s sermon, the last of the year, deals with the martyrdom of twenty thousand Christians, whose sacred memory the Church celebrates today. They were martyred in 304 A.D. in Nicomedia, during the great persecution of Diocletian. The latter was augustus in the East, with his headquarters at Nicomedia, while Maximian was augustus in Rome. These tw...