The Sunday of the Canaanite Woman 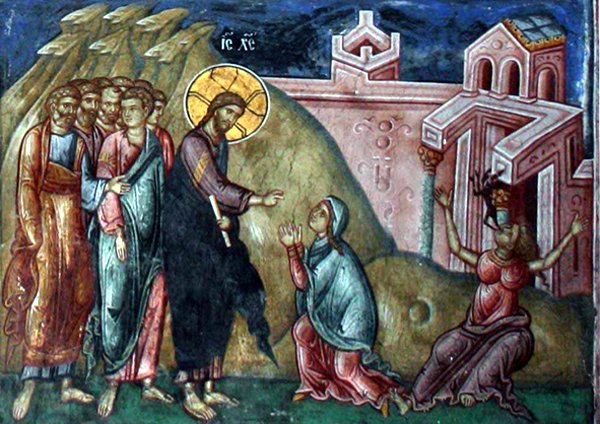 And she didn’t say: ‘Come and heal my daughter, Lord’, but ‘Have mercy on me’ (because, miserable wretch that I am, I’m in pain and anguish over the suffering of my daughter). The latter was left alone at home, sick and almost unconscious, but the mother felt her pain and anguish all the more, precisely because she was a mother.

Christ didn’t respond. Not out of disdain, but in order to fulfil the Law and to demonstrate that He had come first and foremost for the Jews. In this way He would prevent them from saying later that He was breaking the Law and doing good among the Gentiles. Another reason was to manifest the woman’s unflinching faith and her great perseverance.

‘And his disciples came and begged him, saying, “Send her away, for she is crying after us”’. He replied that He hadn’t come for the Hellenes [pagans], but only for the lost sheep of the house of Israel. By this He meant the Jews, who had strayed and become savage, because they hadn’t adhered to the divine commandments, through the wickedness of their high priests. With these words, then, the Lord made manifest the faith of the woman, because, as we’ve said He didn’t reply and His silence brought her close to despair. But then He didn’t listen to His disciples on the matter either and this increased her confusion.

What was the woman to think? On the one hand, the Lord paid no attention to her, but, on the other, He ignored His disciples. She didn’t, in fact, despair, however, because she had both great faith and good sense, and, in her wisdom, she dared to be impudent, in a good way. She approached Him, fell to the ground, weeping, and said to Him: ‘Lord, help me’.

Until this moment, she hadn’t plucked up the courage to look Christ in the face, because she deemed she was unworthy of this. He told her it wasn’t right to take the bread from the children and give it to the dogs. Here again He shows His familiarity, love, honour of and care for the Jews, whom He calls ‘children’, as being His genuine, beloved ones. The Gentiles, on the other hand, He calls ‘dogs’, since they were insignificant and impure, as inveterate worshippers of idols. By ‘bread’, He means ‘healing’, not merely of the body but also of the soul. And do you see the sharpness of the woman and her wonderful presence of mind? She immediately seized on Christ’s words, applied them to herself and said: ‘Yes, Lord, yet even the dogs eat the crumbs that fall from their master’s table’. In other words: ‘Just because I’m a dog doesn’t mean that I’m a stranger to your authority and dominion. Which means that there’s nothing to prevent me from eating the crumbs that fall from your table’.

The laudable Canaanite woman displayed three virtues in this particular instance. The first was her faith, when Christ ignored her and she didn’t become disheartened. The second was her humility, when she admitted she was no more than a dog. The third was her quickness of mind and good sense, when she immediately found a way and method of using the Lord’s own words to achieve her request, as she desired. This is precisely why the Lord didn’t accede to her request immediately. He wanted to show how she thought, in order to shame and condemn the Jews whom an idolatrous woman surpassed in terms of faith, wisdom and humility.

* Monk Agapios uses ‘Hellene’ here in a sense which was common in the early Church, i.e. ‘gentile, pagan, non-believer’. The most common word in the Old Testament for such is goyim, meaning strangers, non-Jews. Saint John Chrysostom has drawn much criticism for his condemnation of the ‘Hellenes’, though a careful reading makes it clear that he wasn’t against the people themselves, but their pagan religion and thought [WJL].