What Great Thursday tells us

As we progress towards the Passion, events unfurl with dramatic speed, rich in significance and with a breathtaking plot as they proceed towards their culmination.

We’ve already seen two actions which are related to the person of Christ and which are entirely opposite in nature. On the one hand, there was the sinful woman  who came to Christ and paid Him humble honours; and, on the other, there’s one of His disciples, who reneges against Him and approaches the High Priests and Scribes in order to betray Him. The action of the woman indicates that His teaching had borne fruit, had convinced people about His love and kindliness. And the Lord indicated His pleasure at her act, accepted her gift and rebuked the disciples who looked for flaws and weaknesses in the image of a woman who was honouring her Redeemer. On the other hand, again, we see that human weakness reached and besmirched even the circle of His closest disciples; those who were thought to be His most loyal followers succumbed to their weaknesses in the most emphatic manner: one betrayed Him, another denied Him. A powerful lesson, indeed, for those who feel strong in their faith and able to strike down their “opponents”. 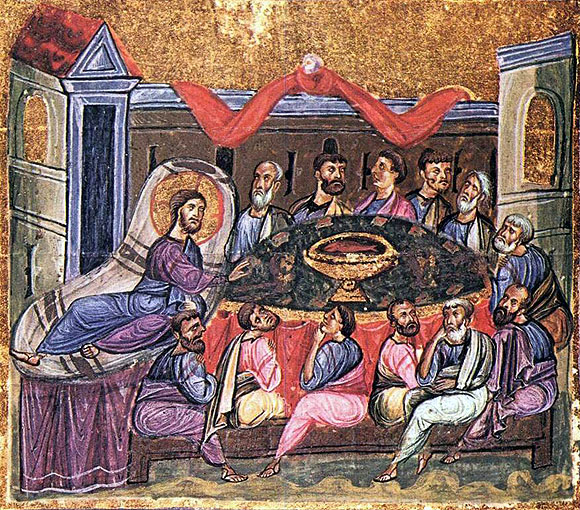 It also transmits to us the instructive dialogue the Teacher had with His disciples. In it, He reveals the great truths about Himself, His mission on earth, His Father, His imminent Passion, His Kingdom, the Comforter Who will come and the Church, while at the same time leaving them with valuable advice on how to conduct themselves in the future. We are also the recipients of a great treasure, known in Greek as the Archieratic Prayer, which the Lord addresses to His Father on behalf of His flock and indicates His intense desire for the unity of this flock, expressed in his request :that they may be one”.

The importance of this unity is reflected in the chief sacrament, the Divine Eucharist, which is transmitted to the Church today. To be in communion with God, you have first to be in communion with other people. The Lord behaves towards Judas in the same way as He does towards the other disciples, even though He knows he will betray Him. All the actions of His presence on earth combine to reconcile human nature and morals and to show them the real human image as made by God, as made to love.

And what is necessary is for people to accept the divine gifts, not “to shy and lose the crown that God has set on their heads”, as Saint Nikolaos Kavasilas says. We need to approach the Supper in humility and diffidence, bearing our efforts and struggle, though, in the end, it’s Christ Himself Who performs the cleansing. It’s He Who bends and washes our grubby feet; we can’t manage it ourselves.

What matters is our actions rather than our declarations: Peter’s braggadocio was soon dispelled by a simple question from a young girl. On the other hand, the silent presence of the women at the cross didn’t require any previous statement of intent. They really demonstrated their love and, whereas the disciples scattered to safe refuges, they remained to follow events, and were granted the honour of seeing the Lord on His Throne, the Cross, just as, a little later, they were permitted to be the first witnesses  to His resurrection.

Apart from His desire for unity among people, what is also very clear in Christ’s words and deeds is His demolition of human certainties, especially those to do with religion. In a homily on today’s events Saint John Chrysostom says that reconciliation with our fellows is a greater sacrifice than laying a gift on the altar. We should bear this in mind if we want to understand why Christ voluntarily ascended to Golgotha and why-scandalously, in human terms- He ushered the robber into His kingdom.