Triodio, the Effort to Rescue the Human Person

Dear readers, it’s true that this year we were going to try to avoid referring to the time of the Triodio, because we’ve done so at length in the past, in some of our older articles, and it’s not good, it’s tedious, to return to the same subject so many times.

Despite our efforts, however, even this year we can’t avoid mention of the period of the Triodio because, quite simply, no matter how much we draw out from this blessed and prayerful time in the life of our Church, it’s almost inexhaustible and there’s always something new for us to discover and work on.

It’s in this the light and in this context that we’re beginning this year’s article on the Triodio, since almost all the preparatory weeks have already passed. Our aim, however, is not to state what the Triodio is, what Sundays are in it, how and how much we should fast and how the timetable for services has been worked out. For all of that we would refer you to older articles where we’ve spoken more extensively and in detail. 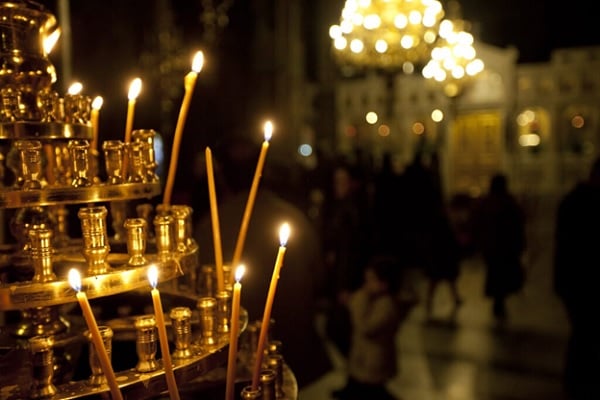 This year we’ve chosen to speak of the Triodio from the point of view of the theological intentions of our holy Church. In other words, in our following remarks we shall see what the Church expects and wants from the faithful as they experience the time of the Triodio. The answer has already been given briefly and succinctly in the title of the article. The aim is for us to remain the persons we were from the moment of our creation as such. This in itself is enough to surprise and confound everything we have in mind when we hear the word Triodio. By a quixotic association of ideas, the Triodio and the time of the Triodio mean wearing masks, carnival, disguise, concealment of the features of the human face, even distortion of our physical characteristics, since, in the right disguise, you can become anything you want: man to woman, young to old, thin to fat, bald to hairy, clear-sighted to bespectacled and any amount of other alterations, additions and subtractions of our real features, of whom we really are.

So in the ecclesiastical and theological sense, through the stages of fasting, general restraint, increase in prayer and services, more Bible readings and fewer hymns, exercise of the virtues and the struggle against our sins and passions, the Triodio has as its aim to turn the spotlight onto ourselves, to get past the outside image we’ve created and to discover our actual self, as we really are, no matter what the wounds, the pains, the traumas we’ve suffered. In other words, to leave appearances behind and get to the substance, but in the sense of who we should try to be. Not to be our authentic selves in sin and a fallen state.

We believe you understand the contradistinction between the climate [ i. e. the masquerade and carnival] imposed by the secular world at this time (remnants of the ancient, pagan world, simply adapted to our modern era) and what our holy Church wants and expects from the time of the Triodio. The strange thing is that most people don’t have it in their hearts and minds that they’re doing anything wrong. Everybody does it and it’s all a joke anyway. It’s part of the celebrations and customs for the time of year. But it’s no joke and it’s not worth playing around with our salvation. If we don’t make good use of the days given to us by the Church for this gradual ascent, how will we make any progress when we’ve been left behind? And are actually going in the wrong direction. What is this? We paint the town red, have masquerades, carnival parades and entertainments at a time when the Church is in mourning and reminding us of Adam’s exile (Sunday before the first Monday of Lent). There’s the whole of this commercial merry-go-round with all the concomitant misconduct such as drunkenness, all-night sessions, injuries and brawls, rapes, orgies, unwanted pregnancies, abortions, arrests, thefts, invasive noise, and a whole host of other dramas which aren’t revealed so as not to provoke reactions from those who for years have been called ‘bizarre, conservative and retrogressive’.

Naturally, we aren’t here to write about our opposition to everything that’s happening or simply to record and denounce it. But just as doctors talk about and draw our attention to any excess that harms our organism; just as environmental experts record the data of our natural habitat and make us aware of disappearing species of flora and fauna; so we refer to all of this in theological terms, not only because it has nothing to offer to our lives but because, on the contrary, it’s actually a spiritual burden. There’s a phrase: ‘What doesn’t kill you makes you stronger’. But alongside that, in this particular instance, we’d add: ‘Anything not proposed by the Ark of Salvation, the Church, isn’t worth spending time and effort on’. Our hearts are supposed to be given to Christ, and Christ became a human person, was crucified and so on in order to save us. How do we repay Him? By transforming ourselves into something we aren’t, when He suffered what He did so that we could become gods by grace?

All those people who take part in carnivals think they belong canonically to the Church, that they’re just having fun and don’t really mean all the things they do during these days of the Triodio before Great Lent. But we have this to say, which we hope will make them stop and think: behind the mask we show our true self, which is oppressed and which, because of social restrictions doesn’t come to the surface as we would wish. Something similar is the case here where, especially through social media, we create a mask that has no relation to our true self but is associated with the desires of our will. Let’s get rid of this ‘I want’- the time of the Triodio is a great help in this- and let’s turn to our real needs, which are Christ and whatever flows from our relationship with Him. So, this Triodio, let’s choose to be persons not characters, let’s resist the spirit of this secular age. It’s worth it and we owe it to our real selves. Amen.