Discourse on the Holy Spirit, that is, on Pentecost 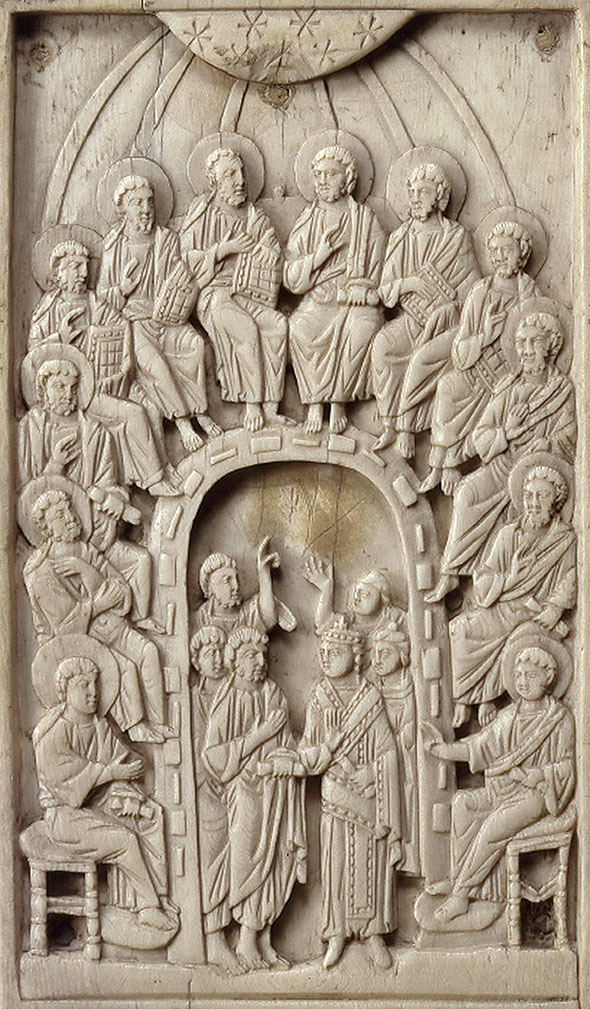 David always gives the most joyful meaning to feasts, tuning his dulcet harp to the requirements of the festival. So let this same prophet delight us on the great feast of Pentecost, too, picking out the melody of wisdom on the strings, through the power of the Holy Spirit. Let him speak to us through that divine melody, entirely appropriate to this feast: ‘Come let us raise our voices in joy to the Lord’. First we need to understand today’s gift and then we can use the right verse from the prophet to suit our purposes. Allow me, please, to clarify my sermon on this, insofar as I can, by putting things in order.

The human race was misled in its understanding of God in the beginning and abandoned the Lord of Creation. Some were fooled into bowing to the elements of nature; others made the demons the objects of their veneration; and many believed that the Divinity resided in the various man-made objects to which they dedicated altars, temples, ceremonies, sacrifices, sacred loci, institutions and all the rest of the paraphernalia associated with the worship of false gods.

The Lord cast a benevolent eye on the corruption of human nature and, through a particular procedure brought human life back from delusion to knowledge of the truth. When, with the help of medical science, people undertake to restore those suffering from chronic malnutrition, they don’t immediately stuff them full of good things. They’re careful to provide them with the proper diet and, once they’ve regained their strength, they can eat as much as they want. Human nature had been exhausted through dreadful starvation so, by God’s dispensation, nourishment was provided in proper doses so that we always received something better and eventually achieved perfection. Of course, what saves us is the life-giving power which we worship in the name of the Father, the Son and the Holy Spirit. But those who were at first unable to swallow any food at all, because their souls were weak from starvation, were brought from polytheism by the prophets and the law and became accustomed to looking towards one divinity and to understanding the power of the Father, in one Godhead, because, as I’ve said, they weren’t able to deal with more complete nourishment. Then came the Gospels, revealing the Only-Begotten Son to those who had a less than perfect understanding, dependent on the Law. And then came the most complete nourishment, the Holy Spirit, Who is life. That’s the meaning of the feast. This is why it’s good for us to take part in this merrymaking of the Spirit and to follow David, the leader in this spiritual chorus, when he says, ‘Come let us raise our voices in joy to the Lord’. And Saint Paul tells us that ‘The Lord is the Spirit’.

Today, at the turn of the year, the day of Pentecost is celebrated, at this time, about the third hour of the day, when this indescribable grace occurred. The Spirit was once again melded with us people, though He had previously been jettisoned from our nature, since we had become mere flesh. With this powerful inspiration, when the spiritual forces of evil had been dispersed and wind had cleansed the air of all the filthy demons, all those who remained in the upper room were filled with divine power in the appearance of flames. Naturally, it’s not possible for people to become partakers of the Holy Spirit unless they live in the upper room of this life. All those whose minds are on the heavens become partakers of the Holy Spirit, transposing their lives from the earth to heaven and living in the upper room of the celestial state. This is what the excerpt from Acts tells us. While the disciples were gathered in the upper room, this pure and immaterial fire passed through in the form of tongues equal to their number. They then spoke to the Parthians, the Medes, the Elamites and the other peoples, changing their speech at will into any of the national languages. Saint Paul, however, says that he would rather address five comprehensible words to the Church, for the benefit of others than thousands of words in a language no-one understands. Then, of course, it was necessary for them to speak the languages of other nations, so that their preaching would bear fruit among those who didn’t share their language and would have been prevented from understanding. Today, however, there’s an agreement of language and we should seek the fiery tongue of the Spirit, so that everyone who is darkened by deceit may be enlightened.

Whom the Prophet called God, Saint Paul called the Holy Spirit. If you don’t believe this, listen again to what was said: ‘Therefore, as the Holy Spirit says “Do not harden your hearts as in the rebellion, as on the day of testing in the wilderness, where your ancestors put me to the test”’. If it’s the Holy Spirit saying ‘your ancestors put me to the test’ and the Prophet says that it’s the Most High God Who was tested in the desert, this stops the mouths of those who speak unjustly against the Spirit as God, since both Saint Paul and the Prophet David both clearly declare the divinity of the Spirit…

So do those enemies of the glory of the Holy Spirit see the fiery tongue of the divine words which illumine what is hidden, or will they mock them, as if they result from tipsiness? But even if they say such things against us, I would advise you not to fear the invective of these people, nor to be cast down by their mockery. Would that they, too, had drunk of that new wine, that freshly-trodden vintage which flowed from the press, which the Lord trampled with the Gospel, in order to make a drink for you from the blood of the grape itself. Would that they, too, were filled with this new wine, which they call must, which hasn’t been mixed with heretical water by the vintners. Because then they would certainly be filled with the Holy Spirit, through Whom all those who are inflamed by the Spirit scour off, as if it were lather, the cloying matter of their disbelief. But they can’t receive the must, since they still carry around with them the old wineskins, which, unable to hold the new vintage, burst and create heresy.

But let us, as the prophet says ‘raise our voices in joy to the Lord’, drinking this sweet drink of veneration, as Esdras urges us to do and participating in the joy of the prophets and apostles at the gift of the Holy Spirit. Let us feel the joy and exultation of this day which the Lord has made, in the name of our Lord Jesus Christ, to Whom belongs glory to the ages. Amen.