Encomium on the Beheading of the Great Forerunner

Dear God-fearing Christians, the feast which we have gathered here to celebrate together today is radiant and filled with divine joy. It is rightly called radiant because it shines from the very name of him whom we are honouring today, since he is called the lamp of the light. He is not, of course, a lamp who illumines us with  material light, because then his radiance would not be enduring and constant and would be lost every time some obstacle moved in front of it. But it is light that shows the brilliant radiance of divine grace in the depths of the hearts of those who have gathered to celebrate his memory and who elevate their minds to think upon the sufferings of the righteous man, so that gazing with the eyes of our souls upon his blessed martyrdom, we shall be filled with spiritual joy. 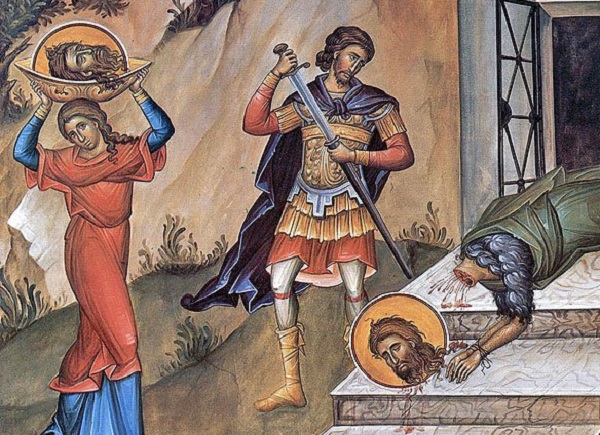 But our eyes rejoice at the sight of the blood of every saint, our ears delight to hear their messages of salvation and our lips reverence them. Because their loss grants perfect participation in the immortal and true life. I do not, of course, mean merely a drop of blood, but anything at all from their holy members- a single hair or anything they wore or touched with their hands- is desirable and valuable for those who have decided to believe and to worship God in the proper manner. This is why people who have something like this in their homes or church- that is a complete relic or a part thereof, even a very small piece- consider it a special honour and are proud of it, as if it were a treasure which advances their sanctification and ensures their salvation. And so they approach the reliquary containing the sacred dust with great reverence and touch with awe the sacred relics which are untouchable because of their sanctity.

What more do I need to say than to refer generally to the blood of all the apostles, the martyrs and prophets, which various gory murderers shed in many different ways and which now circles the earth like a rich river and extinguishes impiety?

Such was the blood of the Forerunner and Baptist of Christ, of whom we are speaking today, which he shed from his sacred neck like precious myrrh, which perfumes the whole world. This blood was not engendered by hedonistic gluttony, nor by wine, nor by any of the other foods which fatten the greedy and give them pleasure.

It was created by the grace of abstinence, which the saint practised from his infancy until his martyr’s death. And as the Lord said, John neither ate nor drank (Matth. 11, 18-19).

This blood was shed before the blood of the Lord, the immortal chalice. Because it was needful that the Forerunner of the Light, who with his radiant birth from a barren mother illumined everyone on earth, should become an effulgent herald also to those who were below the earth, that is in Hell.

This blood has boldness before the Almighty Lord, more than the blood of the righteous Abel. Because every action has within it a mystical voice, which is not produced by the vocal chords but which becomes evident  from the power invested in it by the person who performs the action.

This blood is more deserving than that of the Patriarchs (Abraham, Isaac and so on), more valuable than the blood of the prophets and more sanctified than the blood of all the righteous. Because it is more wonderful even than the blood of the apostles and of the martyrs. Now these words are not mine; they’re from the Great Word, Jesus Christ, Who gave this testimony concerning the Honourable Forerunner.

It is blood which adorns the Church more beautifully than any decoration with variegated and rare flowers. It was shed for justice at the end of the era when the old law was in force, and became a flower which stands at the entrance of the presence of Christ.

But let us continue now to tell, on the basis of the Holy Gospels, how this blood was shed, by whom and for what cause. According to the Gospel, Herod arrested John, bound him and cast him into prison, because of Herodias, the wife of his brother, Philip. Because John had told him: “You’re not allowed to live with her”. So he wanted to put John to death but was afraid to do so, because all the people considered him a prophet (Matth, 14, 2-5). 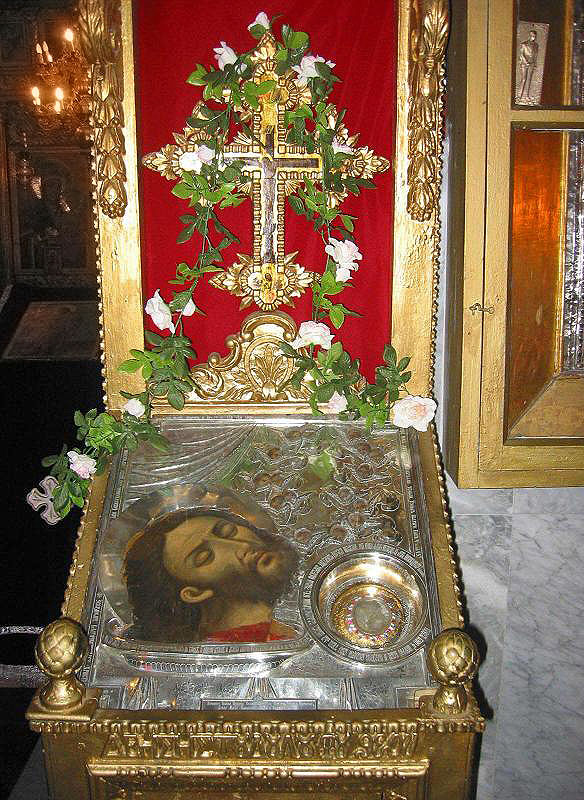 Let’s see first who this Herod was, because there are two people with the same name, which is confusing, and we have to be clear who we’re talking about. This one is Herod the Tetrarch. His father, also Herod and the murderer of the Innocents, had died long before [In 4 B. C. Herod I actually had four sons named Herod].

But why did John upbraid him? Because he had abandoned his lawful wife, the daughter of King Aretas, and was living, illicitly, with the wife of his brother Philip. He could, of course, have married her legally, if she hadn’t already had children by his brother, because Mosaic law allowed this in order to provide heirs. But since she wasn’t childless, he couldn’t. She had a daughter who was also called Herodias, the offspring of a viper, the devil’s tool in her perdition. This is why John, quite rightly, rebuked him. This castigation, however, was not hubristic and was not spoken in order to wound Herod’s soul and dignity, but it was more of a reminder, the aim of which was to bring him to his senses.