Encomium on the Beheading of the Great Forerunner – 2

So what did he say to Herod? “You’re not allowed to live with her”. He reminded him of the divine law, as if saying to him: “Look and see what the Law orders you to do. If there are two brothers and one of them dies without issue, the widow is not allowed to marry a stranger. The brother of the deceased shall marry her and the child who is born will take the name of the deceased, and thus his name will not be lost in Israel (Deut. 15, 5). That’s what the law says. But you’ve taken the wife of your brother and she already has a child. Don’t transgress against the ordinance put in place by the legislator. And don’t soil your royal purple with inadmissible incest. Don’t be seen to be doing something illegal when you should be giving your subjects an example of willing and glad observance of the law. And if you do fall into this error, you’ll be punished, because those in high office are punished more severely”. 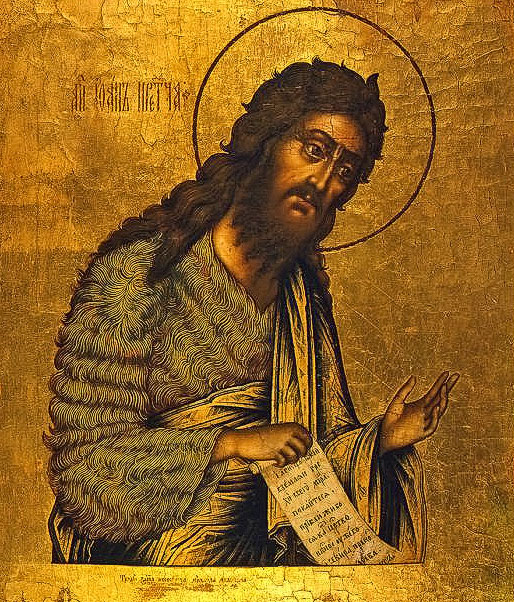 But since he’d only recently come to power, Herod forgot about God. He was furious, boiling with rage, and would not accept the rebuke. He did not imitate David, who, when he was chastised by the prophet Nathan for the sin of adultery, said: “I have sinned before you, Lord” (II Kings 12-13). And the Lord forgave him, because of his humility. Herod, on the other hand, had John arrested, bound and cast into prison (Matth. 14, 3). So the one who was a prisoner of the passion of lewdness arrested him who lived in the most sublime freedom, because of his holy life. He who was bound by the magical cords of debauchery, put bonds on him who was liberated from all things, living as he did outside any binding relationship. He who was, in practice, sinking deep into the mire, put in prison him who was the guard and herald of the Church.

For the sake of Herodias, the wife of his brother, Philip (Matth. 14, 9). For the sake of Herodias, who shared the morals of Delilah, a true tool of the devil. Because it was she who encouraged him who shared her bed- or illicit love we should really say- and made him furious with John. She told him: “I’m a queen and I can’t be made a laughing-stock by the son of Zachariah. Imprison the tongue that’s breaking my bones. Stab, at once, him whose words are wounding my soul like arrows”. And although he wanted to put him to death, he didn’t do so because he was afraid of the people, who considered John a prophet and respected him as such (Matth. 14, 5). Because if people in power want to do something illegal, they can’t execute it as soon as they’ve thought of it, for two reasons: first because they’re ashamed and fear their subjects; and second because they wait until the opportunity arises to put into effect the hatred in their souls without risk to themselves.

So while they were celebrating Herod’s birthday, Herodias’ daughter came out in front of them and danced. She pleased Herod very much and he swore to grant her anything she wanted (Matth. 14, 6).

On the day when he ought to have been thanking God for bringing him into the light of this life, he chose the works of darkness.. This was a day meant for spiritual joy, not for dancing, and certainly not for women dancing in front of men. What did this dance produce? The oath. And from that? Murder. Root out evil and lawlessness will not flourish. But if evil does take root, it’ll bear fruit, that is, it’ll be put into effect. Herodias’ daughter danced in the midst of the guests and pleased Herod. What else would the harlot-trained girl have learned from her mother, other than to dance provocatively and with such skill as to please Herod greatly. This is why he swore an oath to grant her whatever she wished.  This is how rashly the tongues of people run away with them when they lose themselves in the passions of degradation: they blurt out in front of everyone, without thinking, whatever comes into their mind. The girl, schooled by her mother, brought about the hideous decapitation of Saint John, which the venomous Herodias had been wanting to achieve for a long time. I imagine she would have said: “This is the chance we’ve been looking for, my child. You’ve managed, with your dancing feet, to get him to offer me what I wanted. You’ve ended my pain with your skilful song. Let’s bury the man who’s rebuking us. Go quickly and tell Herod: ‘Give me John the Baptist’s head on a platter’ (Matth. 14, 8). What a ferocious and murderous demand! Even though she didn’t have the right to think and enjoy the spectacle of the murder, she outdid everyone in cruelty. What a crazed murderess! Not content with decapitation, you arranged for the head to be brought to you on a platter. What a depraved and debauched woman! Your brutality outstrips even that of blood-stained Jezebel.

The Gospel tells us that the king was saddened. But because he had sworn an oath and had promised in front of his guests, he ordered that she be given the head. He sent to the prison and had John beheaded. Then they set the head on a platter and brought it to the girl and her mother (Matth. 14, 11). 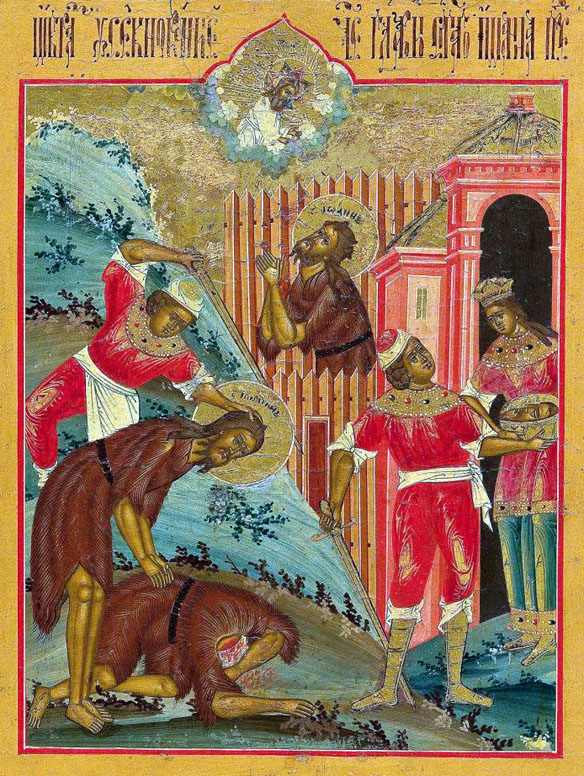 What an evil end to a diabolical coil! Who aimed the stroke of the deathly sword at the saintly head? A lawless servant, who like another Doeg, did not imitate those Jews who with circumspection and bravery stood up to King Saul when he ordered them to murder God’s prophets. “And they brought the head of John on a platter”. What should we call this revel? A banquet or the scene of a murder? What should we call the addle-pated guests? Fellow diners or blood-stained participants?

What an unprecedented sight! What a sinful sight! On the one hand, they were offering chicken and, on the other, a platter with the head of a prophet. From one side, rich clear wine was flowing and from the other the blood of a righteous man was gushing.

How terrible it is for me to say it and dreadful to express!

“And they gave it to the girl and she took it to her mother”. What a sinful sight! Alas! How utterly macabre! The invaluable head was exchanged for a worthless action; the pure and inviolate head, worthy of respect even from the angels, was given for an accursed and impious act. And she handed it to her mother as if she were giving her well-cooked food. To her who in her manic fury had directed the death, as if the child were saying: “Here you are, mother, meat of the flesh of him who lived on earth as if fleshless. Drink the blood of the faster. Once and for all we’ve now shut the mouth of him who rebuked us”.