Andrew the Apostle was one of Christ’s twelve disciples. He came from Bethsaida, a town located on the western bank of Lake Tiberias. He worked in the family business run by his father, Jonah, which was based on the rich fishing to be had in the lake. From their occupation, we can deduce that they were a prosperous and well-to-do family.

Some people have the impression that the disciples were poor and illiterate fishermen. But being fishermen did not prevent them from receiving some education, which, in those days, was not a profession. People could do manual work and still be educated. Fisherman was not necessarily equivalent to illiterate. Saint Paul was highly educated, but was still a tent-maker. 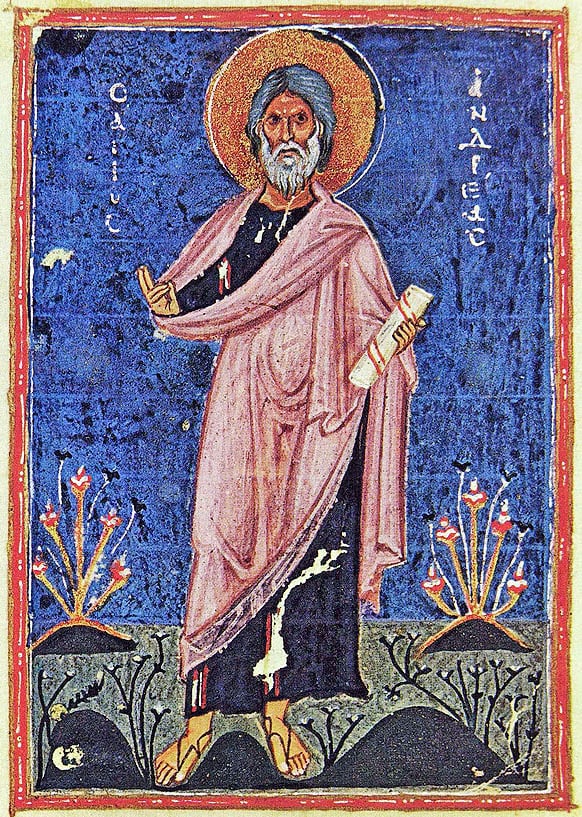 Andrew and his brother Peter were disciples of Saint John the Baptist and followed his teachings. It was he who pointed out the Lord to them, saying: “Behold, the Lamb of God”. They were so impressed that they followed Jesus; not to become His disciples, but to talk  to Him and to acquire personal experience of the Person Whom their own teacher said was superior to him. They talked in private, in a house where the Lord was staying, though we have no information as to what was said. All we know is that Andrew, the brother of Simon Peter was one of the two who had heard John and followed Him. This was a first acquaintance. As we know from the Gospels, the Lord did not begin His public ministry until after the arrest and imprisonment of the Forerunner.

The actual call of Andrew and Peter came on the banks of Lake Tiberias, with the words “Come after me and I will make you fishers of people. And they left their nets and followed Him”. Andrew was called first by the Lord, hence his title “First-Called”. In the New Testament, Andrew is present at the healing of Peter’s mother-in-law, at the miracle of the feeding of the five thousand, and at the encounter between the Lord and the pagan Greeks. Saint Mark the Evangelist presents Saint Andrew, together with three others disciples, as asking the Lord when the prophecy regarding the destruction of Jerusalem would be fulfilled. We have information concerning Saint Andrew’s activities from the apocryphal Gospels, Acts and Martyria, which describe them in the style of a novel.

The information above was used by Church authors, who mention that Saint Andrew preached the Gospel in Scythia. The Russians link the spread of Christianity there with the First-Called Disciple. Church sources in the 4th century tell of his activity in Epirus and his martyrdom in Achaia. 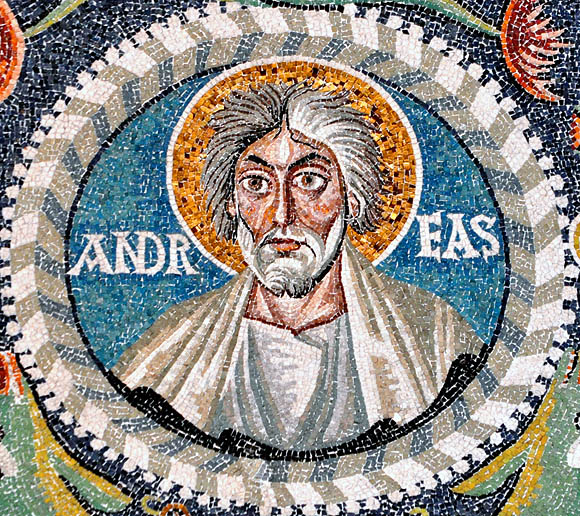 Saint Andrew was considered the founder of the Church of Byzantium, later to become the Great Church of Christ, and that, in fact, he consecrated Stachys, one of the Seventy Apostles, to be its first bishop.

At the Ecumenical Patriarchate, the memory of the holy Saint Apostle Andrew has been observed with a Patriarchal and Synodal Liturgy since 1759 because, in an encyclical of 8/11/1759, the then Patriarch, Serafeim II (1757-1760), established a festal celebration of the saint’s day.

Saint Andrew is considered the patron saint of Patras, because of his activities and his martyr’s death. He drew to Christ Maximilla, the wife of the Roman proconsul Aegeatus, and it was she who buried the saint’s relics, assisted by Bishop Stratoklis, whom Saint Andrew had consecrated Bishop of Old Patras. Many years later, in the year 357, his sacred relics were transferred to Constantinople- though probably not in their entirety- and were deposited in the church of the Holy Apostles. Emperor Basil I the Macedonian returned the honourable skull to Patras and it remained there till 1460. Thomas Palaiologos then took it to Italy, after the capture of the Peloponnesus by the Turks. He presented it to Pope Pius II, who deposited it in the church of Saint Andrew which had been built in Rome. In 1964, the holy skull was returned to Patras and is now housed in the magnificent church which was built in honour of the city’s patron saint.

On the Holy Mountain, there is a magnificent feast at the Skete of Saint Andrew (the Seraï, near Karyes), which belongs to the Holy Monastery of Vatopaidi.

In Cyprus, the Apostle Andrew is particularly popular. The monastery of Karpasia, in the occupied territories, links him to its history and tradition.  In the first century, the saint passed through the region where the monastery is built and struck a spring of holy water. At some later stage, the blind child of a sea captain was cured and the latter had a church built in honour of the apostle. Today’s monastery has been well-known since 1855 when Fr. Ioannis Diakou, from Rizokarpaso, who is considered to be the founder, built the new church which was inaugurated by Archbishop Sofronios on 15 August, 1867. 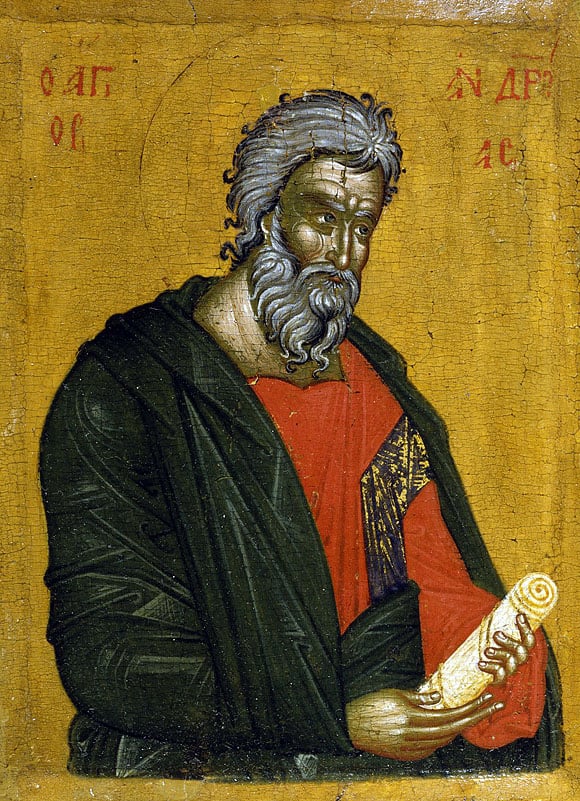 The tradition of the saltire in relation to Saint Andrew is of Western origin, from the 12th/13th centuries. Because of the translation of his relics to Sicily in the 11th century, he is considered the protector of the island.

All the martyrologies accept 30 November as the date of Saint Andrew’s death, though the year is unknown. It is likely that he was put to death in the last years of the reign of Nero, after the execution of the Apostles Peter and Paul.

Through the prayers of Your Apostle, Christ our God, have mercy upon us. Amen!