1. I mentioned to you on another occasion, my Christian friends, that our Church, like the caring mother it is, uses this period of winter- when living conditions have always been difficult- to present us with Sunday Gospel readings that sharpen our awareness of our brothers and sisters who are suffering. So, last Sunday we heard about the Good Samaritan and today about the foolish rich man, which is a parable similar in content to the former. 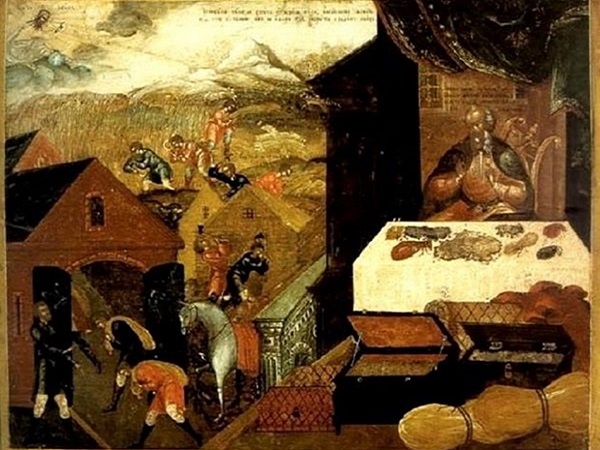 2. Listen. The rich man in the parable didn’t become rich from the goods he acquired that year; he was already rich from previous years. So he had no worries about how he was going to get through the next year. He could easily have said: ‘I’ll give the whole of this year’s harvest as charity for the poor’. But he didn’t. And we don’t hear him thanking God either, for the blessing He gave with the rich yield from his fields. Farming depends mostly on God, since it’s He Who’s responsible if the weather conditions guarantee a rich harvest. Yet, when the foolish rich man saw the bounty, we see and hear him thinking only about himself, and with great concern and anxiety. The hour is midnight: a time when the poor would be sleeping, exhausted from labouring throughout the day to earn their bread. The rich man, however, isn’t sleeping, even though he has everything and, with this exceptional harvest, has just acquired a great deal more. The rich man says something that really only very poor people and widows should be saying: ‘What am I going to do?’. His problem is that his granaries are too small to store that year’s rich harvest! As Saint Basil says: ‘The stomachs of the poor would have been other granaries in which to store this wealth of food’. ‘What am I going to do?’, asks the tormented and pitiable rich man in the parable. A very young school-child could have told him perfectly easily what he should do, but the rich man couldn’t see it. The child would have said: ‘Do some division’. If we know the price of many things and we want to know the price of one, we divide. This is the amount of your goods, this is how many poor people there are in the area, divide the first by the second and the solve the problem that’s confusing and worrying you and has you asking ‘What am I going to do? Since I’ve mentioned Saint Basil, my friends, let me give you a wonderful excerpt from one of his homilies concerning today’s Gospel reading: ‘The more we use the water from a spring, the better it is for the spring and the water itself. Just as water becomes stagnant and polluted if we don’t use it, so unused wealth becomes unproductive and useless’.

This rich man we’re talking about is called ‘foolish’* by God Himself… Theologically speaking, the sense is ‘you have no notion of God within you’. This is why all his words and actions aren’t at all directed towards God, nor even to other people, who are made in the image of God, but are directed simply towards himself. This is like the man in the psalm (52, 2): ‘The fool has said in his heart there is no God’. So in this sense, my beloved Christians, let’s accept that, when we sin, we really do become ‘foolish’. Whereas the more holy we become, the more wise, prudent and sensible we are.

4. Finally, because I’ve just mentioned an Old Testament psalm, I’d like to refer to another one, 48, which seems to be closely related to today’s Gospel reading. This psalm presents the rich who wish to perpetuate their name through their riches as being like sheep who, while they’re being led to the slaughter, continue to look at the grass. So the foolish rich are led to Hades, where they’ll discover that their judges are the poor whom they ignored or even wronged. The psalmist says that none of them see that the rich also die and are lost, just as the mad and the foolish are, and they leave their goods to others. My beloved Christians, let us seek riches from God as the Lord tells us at the end of the parable. We shall acquire these through the enjoyment of Our Lord Jesus Christ in prayer and through the study of the teaching of the holy Fathers.

*There are many words which Saint Luke might have chosen for ‘foolish’, but the one he did select,‘afron’, hits the nail right on the head. The basic form is ‘fron-’ which produces rather a lot of words, all related to mental activity, prudence and forethought. Thus we have the verb ‘frontizō’ which means ‘to look after’ often in the future, in the sense that parents should ‘look after’ their children’s future welfare. Had God called him ‘a selfless, thoughtless libertine’, the man might well have agreed, but He calls him ‘heedless’ or ‘feckless’, which must have seemed like the unkindest cut of all, since he was obviously laying careful plans for the future. In that sense, the man was no fool, though he was nevertheless foolish, because he was planning for the wrong future [WJL].