The Three Hierarchs and Modern Atheism

‘The Impudence of the Heresies is Defeated’
The phenomenon of atheism arose in the West and became a world-wide movement for which Western civilization paid dearly in the 20th century. Atheism began within the Western Church as a reaction on the part of learned men to the arbitrary nature and harshness of that Church (the Inquisition and so on). In the East, there was no such problem as regards the relationship between scholars and the Church, in large part due to the three great hierarchs whom we celebrate today. 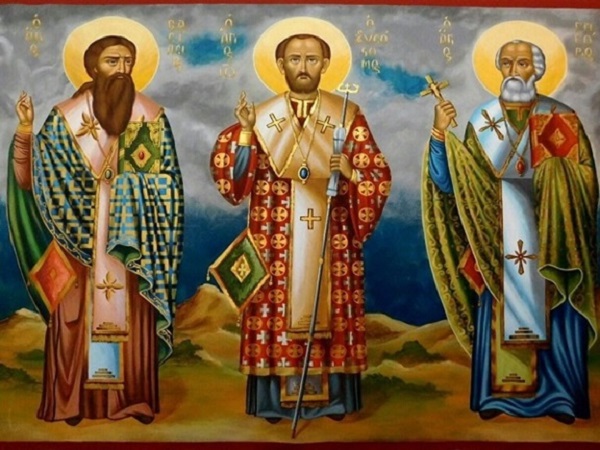 a. They were men of learning. They were scholarly hierarchs with years of study behind them and were brilliant academics. Basil the Great had studied at the University of Athens in their time. Gregory says that Basil was a master of all branches of knowledge as others were masters of only one. They were simultaneously scholars and saints. In a personal manner, they resolved the issue of the relationship between science and faith. Through their lives, the three hierarchs proclaimed that science and faith are not irreconcilable.

b. They served the truth. The Church, as founded by Christ and the Apostles, is a realm of light, truth and life. Scientists, on the other hand seek the truth and the light in their own way. The three hierarchs served the truth of Christianity without adulterating it. Scholars in the West disagreed with and had strong objections to the Scholastic theology of the Western Church. But if we read the teaching of the three hierarchs, there is no doubt and no objections. Because they served the light and the truth and nobody disagrees with the truth.

Atheism isn’t a spiritual phenomenon of the East. Atheism was introduced as a spiritual spin-off from the West, at the end of the 19th and beginning of the 20th centuries. In those years, unfortunately people were being fed with nourishment – material and spiritual – which was imported from abroad.

Today we’re living in another age. There’s been a return to the Orthodox spiritual tradition and to the Fathers of the Church. We’ve had enough of the ‘husks’ imported from the West. It’s time to return to our Fathers’ house. To enjoy their treasures. To feed ourselves and nourish the people who are hungry for the word of Our Lord.