Participating in the services for the feast of «Ὑπαπαντή» (Presentation of the Infant Jesus in the Temple, February 2), a festival dating back to the 4th century, I bring to mind the texts by several Orthodox writers, who since the early 1960s have reported that they feel offended by the orthodox prayers read over a new mother, especially as regards to the concept of “cleansing” the new mother of her «ρύπος» (= dirt, stain, filth). They explain themselves by writing that they associate such prayers with a revival of Old Testament stipulations (in the book of Leviticus), which tend to underestimate the mother and all women.

If «ρύπος» is scandalous, then our Orthodox services for the feast of «Ὑπαπαντή» may be criticized as well, because they are replete of potentially offensive quotes and allusions, which can also be located in our Old Testament heritage. Therefore, I would like to examine whether this is the case. And to do it objectively, in order to discover the root of the scandal, so that – God willing – we can evade it. 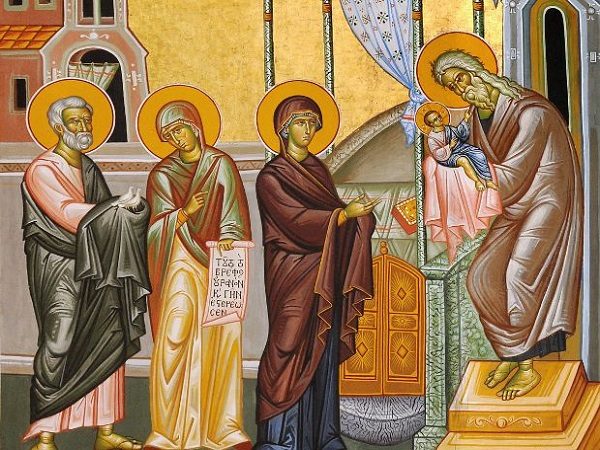 First of all, I quote only a small sample of three such phrases from the Matins of «Ὑπαπαντή» for further consideration:

(“Through the Holy Spirit, every soul comes to life, and through purification, is elevated, enlightened”).

(“Every male child that opens the womb will be holy to God. That is why the firstborn Word, the Son of the eternal Father, the firstborn of the Mother, who has never known a man”).

(“The queen stood beside you, to your right”).

The meaning of the words is understandable, but in the ears of those offended such sacred texts may ring like threatening texts. Implicit in these examples are the notions that: Life and purification, from the very first day, coexist in an inexorable connection. The male child is holy, the Word (the Son of the time-less Father) is male and holy, Jesus (the infant of Mary) is male and holy. The Queen is female, but the King, i.e., God, is male. So, then, does God have a gender? Are we returning to ancient Greek superstitious beliefs, or medieval misconceptions that identify woman with evil?

If we follow the logic of those that are scandalized, we come to the conclusion that as Orthodox, we are obliged to be “cleansed” not only of Leviticus, but also of the Psalms and of Exodus, which are implicated in these liturgical references. Instead, it is preferable to answer with courage, using the voice of the prophet Isaiah, which is heard during the Vespers of «Ὑπαπαντή»:

I believe that instead of changing God, we should change our perceptions concerning gender distinction in humanity, and to conform to the definitions of the terms male and female, as provided in the Bible. We must understand the Bible without imposing on God our own dictionary definitions and our own secular conceptions of equality and rights.

The Bible teaches that gender distinction constitutes a call from God toward unity: «έσονται οι δύο εις σάρκα μίαν» (“the two shall be one flesh”). Yet this will only become reality when they both accept Christ as their head: «πάντες γαρ υμείς εις εστε εν Χριστώ Ιησού» (“because you are all one in Jesus Christ”).

The head does not undermine unity, but, on the contrary, it is the necessary pole that makes unity feasible, expresses it, serves it: «και ος εάν θέλη υμών γενέσθαι πρώτος, έσται πάντων δούλος» (“and whosoever of you wants to be first, let him be a servant of all”). After all, we have been taught: «Πατέρα μη καλέσητε Υμών επί της γης· εις γαρ εστιν ο πατήρ Υμών, ο εν τοις ουρανοίς» (“Call no one your father on earth, for one is your father, the one in heaven”).

The liturgical texts express accurately the Orthodox patristic soteriological and anthropological understanding of the texts of the Bible, which forms the foundation of the Christological doctrines of the Orthodox Church. Now, as far as «ρύπος» in the service for the new mother is concerned, this is not a remnant of Leviticus; the first prayer, itself, connects it with the 51st/50th Psalm: «ιδού γαρ εν ανομίαις συνελήφθην» (“for behold I have been conceived in iniquities “, explaining, in fact, quite rightly, that «εν αμαρτίαις εκίσσησέ με η μήτηρ μου» (“in sins my mother ekissise me”) is synonymous with «διά ρύπου πάντες εσμέν ενώπιόν σου» (“through filth everyone of us is before you”) .

The “Service upon Childbirth” is not just for the new mother, but for all of humanity (or at least, the Church), which is always understood as feminine. The mother is not underestimated, but rather elevated, as a living representation of humanity. Childbearing is not condemned, but rather honored by its identification with the co-creative gift from God to mankind, which only the fall infects and renders it in need of purification. By the prayers for the new mother, we are all cleansed, and we owe this cleansing to the specific woman-mother in front of us. Through one man, death entered. Through One Man, salvation has come. «Η γυνή σωθήσεται διά της τεκνογονίας» (“Through child-bearing, the woman is saved”), that is, through childbirth, the whole of humanity is saved “! What an honor for the mother!

Therefore, we are all called to hasten the day when (according to Isaiah) «πληθυνθήσονται οι εγκαταλειφθέντες επί της γης» (“the remnant (forsaken) on earth shall be multiplied”). Moreover, I suggest that we do not wait «Έως αν ερημωθώσι πόλεις παρά το μη κατοικείσθαι» (“Until the cities are deserted, to the point that they are uninhabited”).

The Bible and its interpretation through the services of our Church are the guaranteed roadmaps for the future, as they have been in the past centuries. If we want to change something, let us change ourselves in unity: «αυξήσωμεν εις αυτόν τα πάντα, ος εστιν η κεφαλή, ο Χριστός» (“let us mature in every way to Him, Christ, who is the head”).