In its opposition to Barlaamite nominalism, Palamite thought is a solemn affirmation of divine immanence in history and in man. God does not reveal Himself to the world only “through creatures” but directly, in Jesus Christ.

We have all, all of us, known the Son by the Father’s voice speaking to us from on high (Matt. 3: 16-17) and the Holy Spirit himself, who is unutterable light, has shown us that this is indeed the well-beloved of the Father; the Son himself has manifested to us the name of his Father and as he ascended again into heaven promised to send us the Holy Spirit to abide with us forever (John 14:16); the Holy Spirit himself has come down to us and abides with us, teaching us all truth (John 14:13). How then could it be true that we know God only through creatures? Is it impossible for one who does not know marriage by personal experience to understand the intimate union of God with the Church, since he has no analogy of his own experience to appeal to? Will you then advise everyone to renounce virginity in order to achieve the knowledge of God of which you speak? But Paul refutes you; he, though unmarried, was the first to proclaim: “This is a great mystery, but I speak of Christ and the Church” (Triads II, 3§ 67). 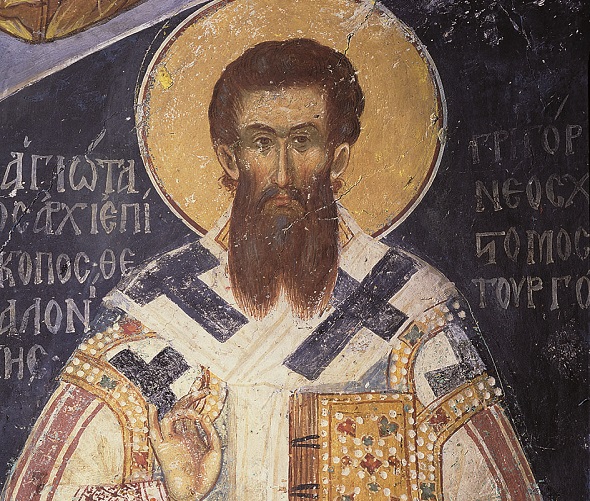 God reveals himself  “face to face, and not in enigmas” (Num. 12, 8); he unites himself to those who are worthy as to his own members, as soul is united to body; he unites himself coming to dwell in his wholeness in the whole of their being, so that they in turn may dwell in him; through the Son, the Spirit is poured out abundantly upon us (Titus 3, 6) and yet it is not, because of that, a created spirit (Triads I, 11§ 29).

Palamas affirms the utter reality of the saints’ vision of God, constantly repeating that the grace that reveals God, like the light that illumined the disciples on Mount Tabor, is uncreated. In Palamite terminology, as in that of the Greek Fathers, God is essentially apart from other beings by His uncreated nature. The proper condition of these beings is the created state, and when they transcend their own domain by communication with God, they participate in uncreated life. Eastern theology has in fact never had recourse to the idea of a “created supernature”; what the Christian seeks, what God grants him in sacramental grace, is uncreated divine life, deification.

Knowledge of God, then, according to Palamas, is not a knowledge that necessarily demands that the knowing subject be exterior to the object known, but a union in created light. Man, in fact, possesses no faculty capable of seeing God, and if such vision exists, it must be because in His omnipotence God Himself united Himself to man, communicating to him the knowledge he has of Himself. Speaking of the supernatural power to see God given us by the presence of the Spirit, Palamas writes:

Since this power has no other means of acting, having gone beyond all other beings, it becomes wholly light in itself and like that which it sees; it is united without admixture, being light (itself), and seeing light through light. If it looks at itself, it sees light; if it looks at the object of its vision, it again sees light, and if it looks at the means by which it sees, again it sees light. That is what union means; all is so one, that he who sees can make no distinction either of the means or the end or the object; he is conscious only of being light and seeing light distinct from all that is created (Triads 11, 3§ 36, pp. 459-461).

Such passages in the hesychast doctor essentially express the scriptural concept that, in Christ, man is given the power to “become Spirit ”(John 3:6).

By participation in God Himself, in His uncreated grace, man himself becomes God. As Saint Paul says, “he lives no more, but Christ lives in him.”