The Beginning of the Cross: Saturday of Lazarus

“Having fulfilled Forty Days… we ask to see the Holy Week of Thy Passion.” With these words sung at Vespers of Friday, Lent comes to its end and we enter into the annual commemoration of Christ’s suffering, death and Resurrection. It begins on the Saturday of Lazarus. The double feast of Lazarus’ resurrection and the Entrance of the Lord to Jerusalem (Palm Sunday) is described in liturgical texts as the “beginning of the Cross” and is to be understood therefore, within the context of the Holy Week. The common Troparion of these days explicitly affirms that by raising Lazarus from the dead, Christ confirmed the truth of general resurrection. It is highly significant that we are led into the darkness of the Cross by one of the twelve major feasts of the Church. Light and joy shine not only at the end of Holy Week but also at its beginning; they illumine darkness itself, reveal its ultimate meaning.

All those familiar with Orthodox worship know the peculiar, almost paradoxical character of Lazarus Saturday services. It is a Sunday, i.e., a Resurrection, service on a Saturday, a day usually devoted to the liturgical commemoration of the dead. And the joy which permeates these services stresses one central theme: the forthcoming victory of Christ over Hades. Hades is the Biblical term for Death in its universal power, for that unescapable darkness and destruction that swallows all life and poisons with its shadow the whole world. But now—with Lazarus’ resurrection—”death begins to tremble.” For there the decisive duel between Life and Death begins, and it gives us the key to the entire liturgical mystery of Pascha. In the early church Lazarus Saturday was called “announcement of Pascha”, it announces and anticipates, indeed, the wonderful light and peace of the next Saturday—the Great and Holy Saturday, the day of the Lifegiving Tomb. 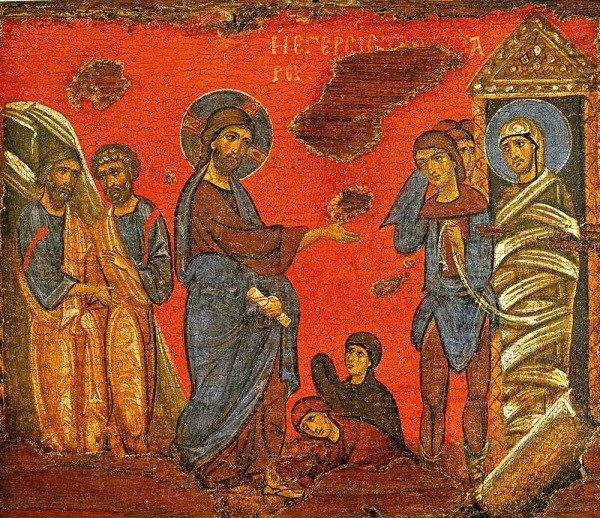 Lazarus, the Friend of Jesus

Let us first of all understand that Lazarus, the friend of Jesus, personifies the whole mankind and also each man, and Bethany, the home of Lazarus the Man, is the symbol of the whole world as a home of man. For each man was created friend of God and called to this Divine friendship: the knowledge of God, the communion with Him, the sharing of life with Him. “In Him was life and the life was the light of men.” (John 1:4) And yet this Friend whom God loves, whom in love He has created, i.e. called to life, is destroyed and annihilated by a power which God has not created: death. God encounters in His own world a power which destroys His work and annihilates His design. The world is but lamentation and sorrow, tears and death. How is this possible? How did this happen? These are the questions implied in John’s slow and detailed narrative of Jesus’ coming to the grave of His friend. And once there, “Jesus wept.” (John 11:35) Why does He weep if He knows that in a moment He will call Lazarus back to life? Byzantine hymnographers fail to grasp the true meaning of these tears. They ascribe them to His human nature, whereas the power of resurrection belongs to God in Him. But the Orthodox Church teaches that all actions of Christ are “theandric,” i.e., both Divine and human, are actions of the one and same God-Man. But then His very tears are Divine. Jesus weeps because He contemplates the triumph of death and destruction in the world created by God.

Love, the Power of Life

“It stinketh.” say the Jews trying to prevent Jesus from approaching the corpse, and this awful warning applies to the whole world, to all life. God is Life and the Giver of Life. He called man into the Divine reality of Life and behold “it stinketh”…The world was created to reflect and proclaim the glory of God and “it stinketh.” At the grave of Lazarus God encounters Death, the reality of anti-life, of destruction and despair. He meets His Enemy, who has taken away from Him His World and become its prince. And we who follow Jesus as He approaches the grave, enter with Him into that hour of His, which He announced so often as the climax and the fulfillment of his whole work. The Cross, its necessity and universal meaning are announced in the shortest verse of the Gospel: “and Jesus wept”… We understand now that it is because He wept, i.e., loved His friend Lazarus, that Jesus had the power of calling him back to life. The power of Resurrection is not a divine “power in itself,” but power of love, or rather love as power. God is Love and Love is life, Love creates Life…It is Love that weeps at the grave and it is Love that restores life. This is the meaning of the Divine tears of Jesus. In them love is at work again—recreating, redeeming, restoring the darkened life of man: “Lazarus, come forth!…” And this is why Lazarus Saturday is the beginning of both: the Cross, as the Supreme sacrifice of love, the Resurrection, as the ultimate triumph of love.