The raising of Lazarus: a description of the icon

The representation takes us outside the city to a place with rocks. In one of these, as was the custom of the Jews, the tomb of Lazarus had been hewn. The figure of Christ dominates the scene. We see his sorrow, but also sense his divinity. This is revealed, in the first place by his majestic attitude and, secondly, by the fact that the Jews, who can be seen on the right hand of the group of people, are looking at Christ, not at Lazarus. At Christ’s command, Lazarus is raised. A young man removes the cloths, while another lifts the tombstone. Lazarus’ sisters also make an impression. They bow down before the Lord, their inexpressible sorrow etched on their faces. It has been well remarked that all those depicted, quite simply, constitute different shades and psychological degrees of the same sentiment, the same psychological state- profound awe in the face of what’s happening: from the calm movement of the apostles, to the self-denying lament of Mary. 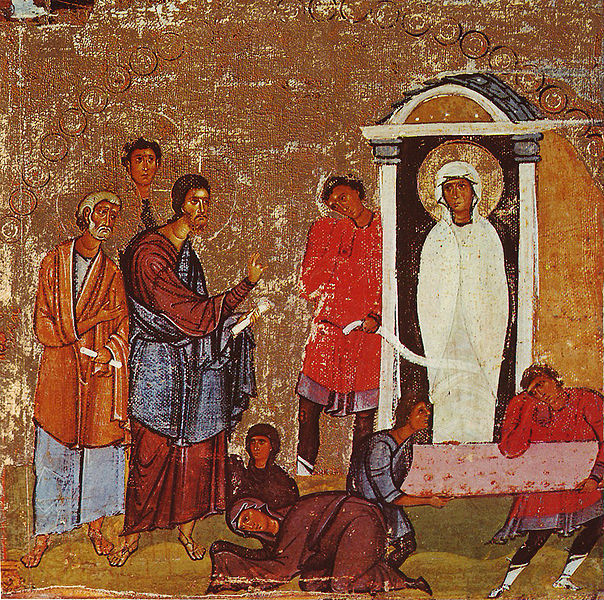 So, apart from the divine element, the icon has human features. Other icons, such as those of the Ascension, the Resurrection and so on, have their meaning hidden, while their symbolic nature is plainly evident. Here things are comprehensible and obvious. Uspensky, who says this, concludes that the icon transmits the external, natural side of the miracle, making it accessible to human understanding and investigation, such as when the miracle took place and how precisely it is referred to in the Gospels.

The depiction is moving, with the faces of the Jews who made haste to comfort Lazarus’ sisters, who are in pain. They become eye-witnesses to the miracle and ‘many of those who saw what Jesus did believed in him’.

The icon of the raising of Lazarus encourages us to recall the profound meaning of the Lord’s words: ‘I am the resurrection and life. Those who believe in me, though they may die, shall live. And whoever lives and believes in me shall never die’.