Sunday of the Myrrh-Bearing Women. The Second Annunciation

Ensconced within the Sunday of the Myrrh-Bearing Women is another, greater feast: that of the second Annunciation of Our Lady. The feast of her Annunciation as the Mother of the new creation, as Mother of the children of the Resurrection.

Saint Gregory Palamas notes that Christ’s Resurrection is the resurrection of human nature and the recall of the old Adam to imperishable and immortal life. And just as the first person to see the old Adam was a woman, Eve, so the first person to see the new Adam, Christ, after his Resurrection which renewed human nature, was also a woman. This woman was not Mary Magdalene, however, but Our Lady, as can be seen from a detailed comparison of the composition of the Resurrection narratives in the four Gospels, an  analysis which Saint Gregory Palamas did, in fact, make. 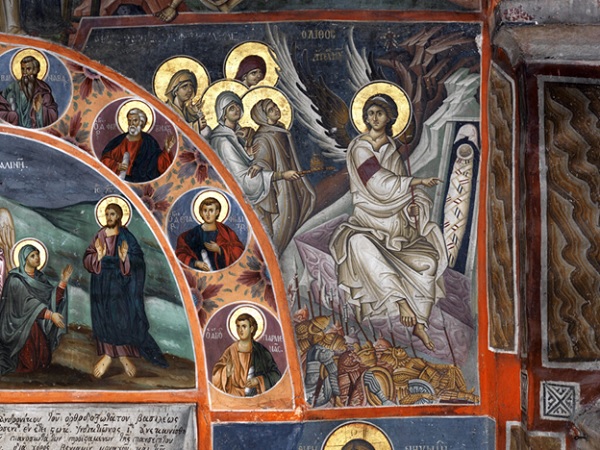 At the end of Mark’s Gospel we read: ‘When he rose on the morning on the first day of the week, he appeared first to Mary Magdalene, from whom he had cast out seven devils’ (16, 9). But the same Evangelist who mentions this as Christ’s first appearance writes a little earlier in his narrative, in the extract read on Easter night, that Mary Magdalene, Mary [the mother] of James (i. e. Our Lady) and Salome bought spices and came to the tomb ‘very early in the morning’ (16, 1).

So Christ’s appearance to Mary Magdalene did not occur ‘very early in the morning’ but simply ‘in the morning’. It seems that this is a second or even third visit to Christ’s tomb. On her first visit, which occurred ‘very early in the morning’, when, as Saint John the Evangelist notes, it was still dark, she discovered that ‘the stone had been removed from the tomb’. She ran to Peter and ‘the other disciple, whom Jesus loved’ and said to them: They have taken away the Lord from the tomb and we do not know where they have laid him. (Jn. 20, 1).

As Saint John again notes, the tomb was ‘nearby’ (19, 42). Besides, there were a number of myrrh-bearing women. They didn’t go to the tomb just once, but two or three times, as the Gospel texts make plain, accompanying one another in groups which were not always the same. Magdalene also went by herself.

The aim of the Gospel writers was not to describe Christ’s Resurrection in detail, but to announce this providential event. The Gospels aren’t systematic narratives, but, as Justin Martyr notes, they were the apostle’s ‘memoirs’, that is notes about the life and teaching of Christ (Apologia I, 66, 3). At the conclusion of his Gospel, Saint John writes that there are many other things which Christ did and if they were all to be written down separately there wouldn’t be room in the whole world to contain the books. So each of the four Evangelists writes about one or two visits to Christ’s tomb by the myrrh-bearing woman and leaves the rest out.

It follows, then, that the first visit to Christ’s tomb was that of Our Lady and Magdalene, as described by Saint Matthew: ‘Now after the Sabbath, as the first day of the week began to dawn, Mary Magdalene and the other Mary came to see the tomb. And behold, there was a great earthquake; for an angel of the Lord descended from heaven, and came and rolled back the stone from the door, and was sitting on it’ (28, 1-2). All the other myrrh-bearing women came after the earthquake and found the stone rolled away.

Our Lady (who is ‘the other Mary’) was present at the earthquake and the removal of the stone from the tomb. The angel appeared to her before anyone else, opened Christ’s tomb and addressed to her the message of her Son’s Resurrection. This is the second time an angel had addressed her in this way and Saint Gregory identifies him with the Archangel Gabriel, who had appeared to her at her first Annunciation.

Since she was ‘purified in the extreme’ and ‘divinely filled with grace’, Our Lady felt great joy at what had happened, whereas Magdalene was afraid, as if she hadn’t really understood any of the events. All she could see was the emptiness of the tomb, which she ran to report to Peter and the other disciple [1].

So it was Our Lady who first saw Christ and spoke to him. All things in heaven and earth were opened up, first for her, and, through her, to us [2]. She alone embraced his holy feet- even though the Evangelists don’t mention this specifically because they didn’t want to present her as a witness to her Son’s Resurrection [3]. On the other hand, Mary Magdalene, who encountered the Lord on her next visit to the tomb, and mistook him for a gardener, was told not to touch him, when she’d realized who he was and went to venerate him. Instead, she was sent to announce the good news to the disciples [4].

It’s also interesting to note the different greetings addressed by Christ to the myrrh-bearing women and his disciples. To the women he said: ‘Rejoice’, whereas to the disciples he said ‘Peace be with you’ [5]. The first thing the women needed, having undergone the pain of the Crucifixion, was joy. And the first thing the disciples needed, given that they were shaken with fear of the Jews, was peace.

Peace is directly linked to joy. And joy presupposes peace. Besides, joy and peace, together with all the other Christian virtues, constitute the single and undivided fruit of the Holy Spirit (see Gal. 5, 22). What torments people and throws them into turmoil and anxiety is death. This is why those who haven’t overcome the fear of death can’t know peace. Real peace is possible only through liberation from the fear of death. Real joy also presupposes that we be freed from this fear.

Christ confirms that the peace he offers us is different from secular peace. The peace of the world is conventional and fragile. It’s a peace that operates ‘within the terms’ of corruption and death. This is why Christ distinguishes his peace from the peace of the world: ‘Peace I leave with you, my peace I give to you; not as the world gives do I give to you’ (Jn. 14, 27). But neither is Christ’s joy that of the world. It’s neither conventional nor fleeting, but firm and unassailable. It’s ‘fulfilled’ joy that no-one can take away from us.

His coming into the world is the annunciation of joy and peace. Real peace and real joy are, in the final analysis, the benefits of the new creation. This is why Our Lady, who is the mother of the new creation is named as the ‘occasion of joy’. But the actual source of this joy is Christ himself (Eph. 2, 14). And his Resurrection from the dead is the confirmation of our inalienable joy and the imperishable peace which he gives us. Any search for these things apart from Christ and Our Lady is completely pointless.

[5] ‘Saying to the myrrh-bearing women rejoice and giving peace to your apostles’. Kontakio of the feast of Easter.