One of the most striking features of Christianity is that it is not culture-based. Judaism is Jewish, the Olympian gods were Greek, Hinduism, Sikhism and Buddhism are Indian, Taoism Chinese, Shintoism Japanese and so on. Whatever it may have become later, through acculturation into various societies, in its origins Christianity was something radically different: a challenge to established patterns that had grown out of the society in which they were formed. This can be seen very clearly in the events after the Crucifixion, which are barely comprehensible in conventional terms. The first is the recognition of Christ’s divinity by the centurion, who, as a Roman, would not have had any interest in the death of a Jewish criminal. 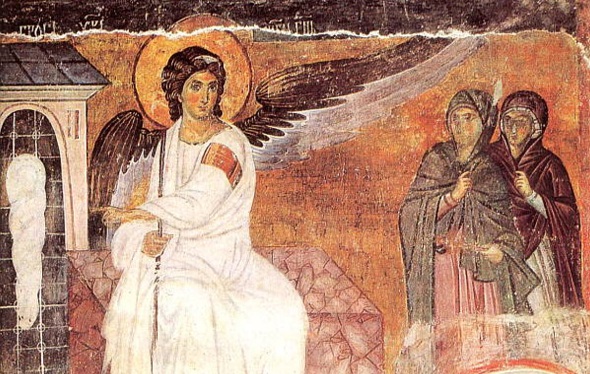 Then the disciples, who have featured prominently in the Gospels, all make themselves scarce and two previously unknown followers of Christ, Joseph and Nikodimos, unexpectedly come out of hiding and take the responsibility of finding a grave for Him and making preparations for the embalming. There is also the announcement of the good news of the Resurrection being entrusted to people who have, indeed, figured in the Gospels, but as rather inconsequential, peripheral figures: women, whose testimony was not even admitted in certain interpretations of Jewish law. And, perhaps that oddest aspect of all, the fact that people who had spent years in the company of the Lord were unable to recognize Him after the Resurrection. These extracts from Saint John Chrysostom expand on this. (WJL).

‘But Joseph went, and begged the body’.

This was Joseph who had until then concealed his discipleship. Now, however, he became very bold after the death of Christ. He was no nonentity, nor someone to be overlooked, but one of the Council, and a very distinguished person. From this, in particular, we can see his courage: he exposed himself to death, by making himself the enemy of everyone because of his affection for Jesus, both by daring to beg the body in the first place and then persisting until he obtained it. Not only did he take the body, nor merely bury it at considerable expense, but he also laid it in his own new tomb, thus demonstrating his love and courage. And this was all arranged in such a way that there would not be the slightest suspicion that perhaps one person had risen in the place of another.

‘And there was Mary Magdalene, and the other Mary, sitting over against the sepulchre’.

What were they doing waiting? As yet and as was proper, they knew nothing great or sublime about Him, but they’d brought ointments, and were waiting at the tomb, so that if the manic behaviour of the Jews relaxed, they might go and embrace the body. Do you see the courage of these women? Do you see their love? Do you see the nobility of spirit, even in the face of death, in their actions? We men should imitate those women and not abandon Christ in His tribulations. Because, even when He’d died, they gave so much and even risked their lives. Whereas we (let me say it yet again) don’t feed Him when He’s hungry, don’t clothe Him when He’s naked, but, on the contrary, when we see Him begging, walk straight past Him.

‘Then the disciples went away again unto their own home. But Mary stood without at the sepulchre, weeping’.

The female sex is, in a way, more feeling and more inclined to pity. I say this in case you wonder how it was that Mary wept bitterly at the tomb, while Peter was not affected to the same extent. It says: ‘The disciples went away to their own homes, but she stood weeping’. Because her nature was weak and she, as yet, didn’t know clearly the account of the Resurrection; whereas they had seen the linen cloths and believed, and departed to their own homes, utterly astonished. And why didn’t they go straight to Galilee, as they’d been told to before the Passion? Perhaps they were waiting for the others, or else they were still too amazed. They went on their way, then; but she stood at the same place, since, as I’ve said, the tomb appears to have comforted her.

Be that as it may, we see her bending low and, to ease her grief, looking into the place where the body was lying. And she received no small reward for her trouble. What the disciples didn’t see, this woman was the first to behold: Angelssitting, one at the feet, the other at the head, clothed in white, their faces lit with radiance and joy. Since the woman’s understanding wasn’t quick enough to accept the Resurrection from the proof of the linen cloths, something greater happened, she saw something more: Angels sitting there with radiant faces to bring her out of her sorrow for a while, and comfort her. They said nothing to her about the Resurrection, but gently led her towards an understanding of it. She saw faces that were most unusually radiant, far beyond anything normal. She saw splendid forms and heard a kindly voice. What did it say?

‘Woman, why are you weeping?’

In this way she was led to the knowledge of the Resurrection as if through an open door. And the way they were sitting invited her to question them, since it showed that they knew what had taken place: they weren’t sitting together, but apart from one another. Since it was improbable that she would feel able to question them, it was they who, by the way they were sitting and the question they asked, drew her into conversation. And what did she say? She replied warmly and with concern.

‘They’ve taken away my Lord, and I don’t know where they’ve laid Him’.

‘What are you talking about?’ You don’t know anything about the Resurrection and you’re still imagining that they’ve changed His resting-place?’ You see how she still wasn’t aware of the wonderful news?

‘And when she’d said this, she turned around’.

And what would it have been that made her turn round after she’d spoken to them and before she’d received an answer? I think that while she was speaking, Christ suddenly appeared behind her, much to the astonishment of the Angels, and that, on seeing the Lord, they immediately betrayed it by their bearing, their looks and their movements. Perhaps it was this that drew the woman’s attention, and made her turn round. He appeared to the Angels in this form, but not to the woman, so as not to astound her at the first sight of Him, but in a humbler and more ordinary form, as is clear from that fact that she supposed him to be the gardener. It was considerate to lead such a humble person to high matters gently, rather than all at once. So He, in turn, asked her:

‘Woman, why are you weeping? Who are you looking for?’

This showed that He knew what she wished to ask, and drew her out for an answer. The woman, realizing this, again makes no mention of the name of Jesus, but answers as though her questioner already knew the object of her enquiry:

‘Sir, if you’ve taken him somewhere else, tell me where you’ve put him, and I’ll take him away.’

Again she speaks of laying down, and taking away, and carrying, as though speaking of a corpse. But what she means is: ‘If you’ve taken him away for fear of the Jews, tell me, and I’ll take him.’ The woman is very concerned and lovingly affectionate, but she still has no inkling of anything sublime. So now He sets the matter before her, not by His appearance, but through His voice. … And He merely called her by her name, reproaching and chastising her for entertaining such fancies about someone who was alive.

Saint John Chrysostom: Excerpts from Homilies LXXXVIII and LXXXIX on Matthew and LXXXVI on John.