Why was the stone rolled away from the entry to the tomb?

There can hardly be any Christian believer who doesn’t know that an angel descended from heaven and rolled away the stone from the entry to the tomb where the Creator of life lay dead, without breath. Very few, however really know why the stone was rolled away. Most people confuse two things which are independent of each other: the Lord’s exit from the tomb and the rolling away of the stone. In other words, they think that the angel came down and rolled away the stone so that the Lord could emerge, that when He did so there was an earthquake which terrified the guards to such an extent that they ‘became as if dead’. This is not only what ordinary Christians believe, but even what some of those who preach the Gospel think. In many icons of the Resurrection, in fact, both Byzantine and Western, we see the angel taking away the stone and the Lord emerging from the tomb, while the guards, terrified at the sight of Him, fall down as if dead. This is historically inaccurate! 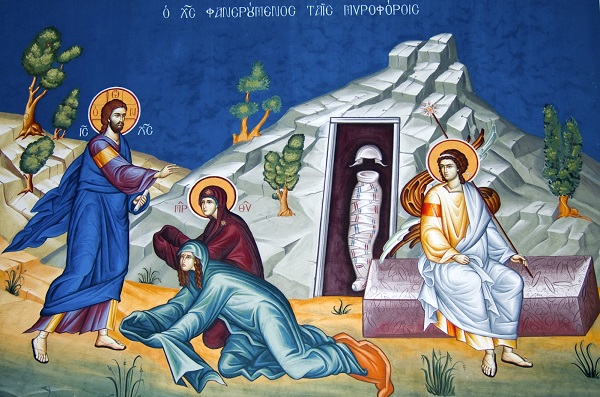 If you study the Gospel of Matthew carefully, you’ll see that the Lord had emerged from the tomb before the descent of the angel, the rolling away of the stone, and the earthquake which occurred at the same time. The stone was rolled away, not so that the Lord could emerge, but to demonstrate that He’d already done so. It was rolled away so that the myrrh-bearing women could approach, see the empty tomb and be convinced of the Resurrection. Let’s look at the sacred text: ‘So they went with the guard and made the tomb secure by sealing the stone. After the sabbath, as the first day of the week was dawning, Mary Magdalene and the other Mary went to see the tomb. And suddenly therewas a great earthquake; for an angel of the Lord, descending from heaven, came and rolled back the stone and sat on it. His appearance was like lightning, and his clothing white as snow. For fear of him the guards shook and became like dead men. But the angel said to the women, ‘Do not be afraid; I know that you are looking for Jesus who was crucified. He is not here; for he has risen*, as he said. Come, see the place where he lay. Then go quickly and tell his disciples, He has risen from the dead’ (Matth. 27, 66-28, 7).

As is obvious, there’s no mention of a sign of the Lord’s Resurrection here. It’s already happened. The angel descended to provide the Myrrh-Bearers with tangible proof of the Resurrection when they came to the tomb. This is why he rolled away the stone: so that they could easily go in and see for themselves that it was empty. Once he’s told them of the Resurrection, he says that they can verify the truth of his words by going in and having a look: ‘ But the angel said to the women, ‘Come, see the place where the Lord lay’. In other words, ‘Don’t doubt what I’m telling you. The Lord has truly risen. If you want irrefutable proof, there’s the tomb. Check it out and see for yourselves that it’s empty’. The Myrrh-Bearers then went in and, once they’d seen that it was empty, emerged ‘with fear and great joy’ (Matth. 28, 8).

So the stone was rolled away for the Myrrh-Bearers (and for the Disciples who ran there shortly afterwards), not for the Lord. It was lifted to allow the entry of the Myrrh-Bearers and the Disciples, not the exit of the Lord. Adding one miracle to another, the Lord departed the tomb without moving anything aside. The heavy stone remained in place, the seals were untouched, the guards were quietly observing the area when the Lord of Life and Victor over death emerged from the tomb. There was no sign as evidence that this had happened, no noise or sound to indicate what had happened. Everything was calm and peaceful. The guards weren’t aware of the Lord’s Resurrection and emergence from the tomb and would have continued to guard it for a long time if the descent of the angel hadn’t relieved them of the task.

Naturally, the great hymnographers of the Church, who studied the sacred texts in depth, were well aware of this detail concerning the exit of the Lord from the tomb, without the stone being removed, without the seals being destroyed and without the guards being aware. ‘Indeed, after the miscreants had sealed the stone You allowed us to see a greater miracle… Come see, you Jews, how He Who has trampled down death did not break the seals…’ (Resurrection verse at Lauds, tone 2). ‘Lord, when the tomb had been sealed by the miscreants, You emerged as You did when the Mother of God bore You. The bodiless angels did not know of Your incarnation; nor did the soldiers guarding you realize that You had risen’ (Resurrection verse at Lauds, tone plagial 1). ‘Lord, as You emerged from the tomb, so did You also go in to Your disciples, though the doors were locked’ (Ibid). ‘Keeping the seals intact, Christ, You emerged from the tomb, as You had not unlocked the keys of the Virgin at Your birth…’ (Tropario of the 6th Ode of the Easter Canon). ‘Though the tomb was sealed, Christ our God, You shone as Life from the tomb; and though the doors were shut, You Who are the Resurrection of all, came to Your disciples…’ (Dismissal Hymn for Thomas Sunday)

How beautifully and poetically they make the comparison between the miraculous exit of the Lord from the sealed tomb and His entry into the locked room where the Disciples had gathered, or with His birth from His Virgin and All-Pure Mother.

*Some English versions of the text say ‘he has been raised’, but this is incorrect. They take the verb, ηγέρθη, as being in the Passive Voice, whereas in fact it’s in the Middle Voice and has a ‘reflexive’ meaning something like ‘he raised himself’. This is a very common feature in Greek. For example, the verb in Modern Greek would be ‘σηκώθηκε’, which look passive, but isn’t. By the same token, the Easter greeting is ‘Christ has risen’, even though ανέστη looks as though it should mean ‘has been raised’. WJL.