A Saint who passed through fire and iron*

This saint lived at the time of Emperor Antoninus, about the year 140. She came from a village near Old Rome [as opposed to New Rome, i.e. Constantinople] and was the daughter of Christian parents, called Agathon and Politeia. They were meticulous in their observance of the Lord’s commandments, but were childless and constantly entreated the Lord to give them a child.

And God, Who grants the wishes of those who worship Him, gave them a daughter, who, at baptism, they named Paraskevi, since she was born on a Friday, which in Greek is called Paraskevi, the day of preparation [for the Sabbath]. From the time when she was still young, the girl devoted herself to God. She was taught and encouraged by her mother. When she had learned her letters, she read the Holy Scriptures. She was close to the Church and prayed a great deal. But when her parents died, she gave away all her belongings to the poor and, after becoming a nun and taking the veil, went out into the world, proclaiming the name of Christ as our true God. In this way, she brought many idolaters to knowledge of God. There were some Jews, however, who slandered her to the then emperor, Antoninus, saying that a woman called Paraskevi was preaching Christ, the son of Mary, Whom their forefathers had crucified. 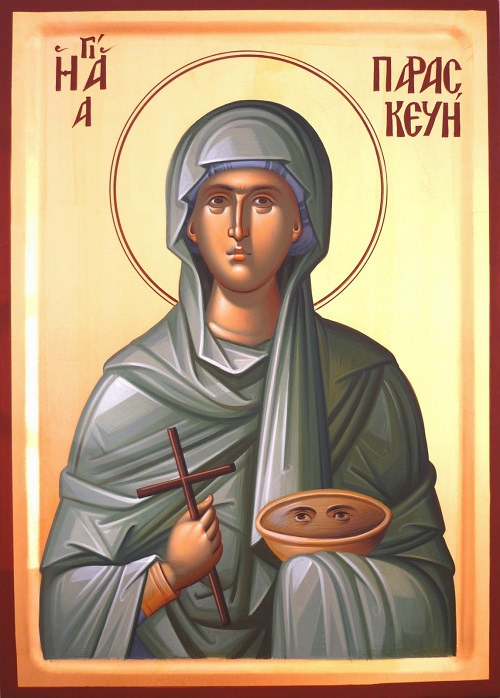 When the emperor heard this, he ordered that the saint be brought before him. When he saw her, however, he was speechless, astounded by her good sense and beauty. He said to her: ‘If you pay attention to what I say and if you sacrifice to the gods, you’ll be given many gifts and goods. If you don’t then you should know that I’ll hand you over to be tortured’.

The saint boldly replied to the emperor: ‘God forbid that I should ever deny the name of Christ. As the Prophet Jeremiah says: “The gods who did not make the heavens and the earth shall perish from the earth”’ (Jer. 10, 11). The emperor became furious and ordered a helmet to be made red hot and to be placed on the head of the saint. When this was done, she was protected by a divine, cooling draught and remained unharmed. As a result of this miracle, many idolaters believed in Christ from then on. The emperor then ordered that a vat of oil and pitch should be brought to boiling point and that the saint should be thrown in.

When the martyr was in the vat, it seemed as if she was merely cooling off: ‘Sprinkle me with the oil and pitch, Paraskevi’, cried the emperor, ‘so I can see if they’re really hot’. The saint filled her hands and threw the liquid into the emperor’s face, immediately blinding him. ‘Have mercy on me, servant of the true God and I’ll believe in the God you preach’. At once, his sight returned and he believed in Christ, as did all his retinue, and they were baptized in the name of the Holy Trinity. After leaving, the saint went to other towns and villages, where she preached the name of Christ.

Having arrived at another town, where a man called Asclepius was ruling, she was brought before him. After she’d called upon the name of Christ and made the sign of the cross, she confessed to being a Christian and preached Christ as God of heaven and earth. When the king heard this, he became alarmed and had her taken to a ferocious dragon which lived outside the town. It was their custom to throw condemned people to this beast, which would eat them. When the saint arrived at this place, the dragon saw her, whistled loudly and opened its mouth, belching thick smoke. The saint went up to the dragon and said: ‘The wrath of God has come upon you’. When the dragon blew out its breath again, she made the sign of the precious Cross. The beast made a loud whistling sound, was rent in two and disappeared. When the ruler and his comapnions saw what had happened, they all believed in Christ.

After the saint left there, she went to another city, ruled by a man called Tarasios. He had received information about the saint and had her arraigned in a court of law. On being asked by him, she confessed herself to be a Christian and preached Christ as the true God. So they placed her in a vat of oil, pitch and lead and then lit a fire undernearth. But an angel of the Lord appeared and cooled the liquids. So again Chrsit’s martyr remained unharmed. The inhuman tyrant subjected her to other tortures, but was unable to shake her strong faith. In the end, he cut off her head and the soul of the blessed saint ascended to the eternal dwelling-places.

* An expression which is found in Hebrew, Greek and Latin but which seems not to have entered English.