Through the Holy Spirit, David, the Prophet and King, sang, “Glorious things are spoken of you, the City of God”. In this way he revealed, as City of the Great King, her of whom many wonderful things- praises and hymns- have been spoken. But what is this City, in fact? It seems to me that David answers this clearly and beyond doubt when talking about her who was really chosen and is superior to all others. Not because of the excellence of its buildings, nor because it is higher than the highest hills and mountains of the earth. The all-immaculate and all-unblemished Mother of God is higher because of her great, divine virtues and because she excels in purity. The King of royal rulers and Lord of the overlords dwelt in her. Or rather, in accordance with the holy Apostle, we should say that “all the fullness of the deity in bodily form” dwelt in her. 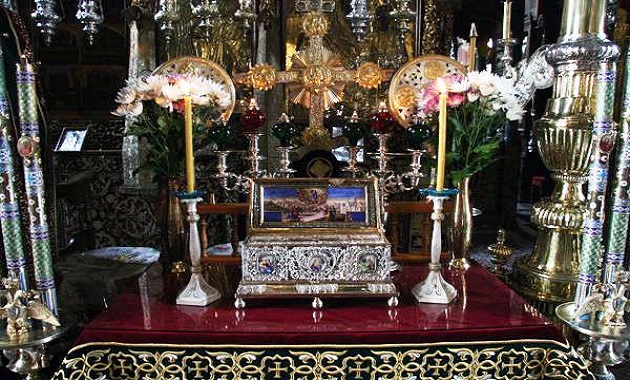 Our Lady, the Mother of God, really is the glorified City of God. She is the spiritual Zion. I believe that it was of her that David spoke prophetically. And if one were to call her church the glorified city, it would not be far from the truth. Here, the memory of many people is preserved, as are the names carved on gravestones. And if headstones and monuments are raised to this day for people whose names it is not proper for us to mention, and if their reputation is among the most assured, what shall we say about the All-hymned Maiden, the All-spotless and All-unblemished Mother of God, who was glorified by God? Because if she was the animate city of Christ the King, then it is proper that her all-holy church, the inauguration of which we celebrate today together with the deposition of her holy belt, should also be called the city glorified by God. A city where the names of its residents are not recorded as belonging to a mortal, earthly king, but to the heavenly King, Who directs them to eternal life and gives His Kingdom to all who follow Him.

My honourable and God-fearing audience, when you hear of today’s inauguration, do not let your mind dwell on the newly-constructed buildings and other edifices which have just been finished, but rather consider the spiritual inauguration, at which our inner person discards the old and torn raiment of sin and puts on the new garment of devotion, and lives the new life of Christ. This is the inauguration which brings joy to the Mother of God. With the appropriate virtues and living the new life according to God’s will, let us with purity delight in the pure inauguration of the pure and immaculate one. And, as if she were present, let us approach her venerable church, putting all our reflections and actions in order and transforming them for the better. Let us not do anything unworthy of the day of the inauguration, as Scripture says, either in our gait or our laughter. Nor should the decoration of our clothing be inappropriate. And furthermore, let us arrange our thoughts accordingly. In all things, may charity be at the fore, because this pleases God, contents Him. Then we can celebrate with renewed soul and body the inauguration of the church of the All-Spotless Mother of our God after the flesh.

When some vessel comes into contact with aromatic myrrh we know that it will retain the fragrance for a long time. So what can we say about the belt which was wrapped round the most pure and spotless body of the Mother of God, which was really inexhaustible divine myrrh? Would it not retain for centuries the fragrance of its curative powers and fill all those who approached in faith and yearning? Not the aroma of milk, but a divine and all-venerable fragrance; a fragrance that banishes the passions of both body and soul. And if, as we said, an inanimate vessel that comes into contact with inanimate myrrh absorbs something of its quality, what can we say about the belt, which touched the animate dwelling of the Word of God, that is, the Mother of God. Shouldn’t we hasten to it? Shouldn’t we venerate it? Shouldn’t we ask of it the total purification of our souls and bodies? Shouldn’t we speak to it as if it were animate and offer hymns of praise…