The humility, goodness and love which Elder Iosif [Vatopaidinos, (1921-2009)] bore in his soul moved God and were the solace of our brotherhood, who looked to him as our guide. 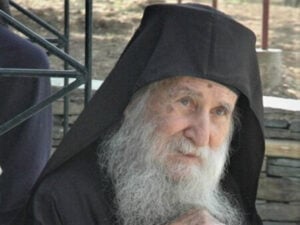 Metropolitan Athanasios of Limassol tells of an event which shows the extent to which God was well-pleased with the spiritual labours of the Elder and also reveals the careful attention required in a place where many people are living together, if misunderstandings are to be avoided.

‘As Elder of the Monastery, Elder Iosif undertook some initiatives of a practical nature, one of which however, seems to have infringed the responsibilities of the duties of another member of the brotherhood. Elder Iosif usually acted as the founder and guide of the community and any activity proposed by him was accepted.

This particular act, however, was brought to the attention of the monk whose obedience it impinged upon by another monk and in a clumsy fashion. The monk concerned was younger and complained loud and long against the Elder.

This monk actually did respect the Elder, but was swayed by the manner in which he’d been told about the initiative. He even railed against the Elder in the courtyard of the Monastery. He went so far as to say: “Who does old Iosif think he is? Is this how he’s going to behave towards us now? Is that how it’s going to be?”

Some other monks went and told the Elder, who calmly said:

It was a Saturday. At the time for Vespers I was in the sanctuary, getting ready to put on the vestments for the service. The Elder came in through the north door, where the Offertory Table is. There’s a small passage-way and a square space, a tiny room under a little cupola. He called out to the monk concerned, who was also a priest-monk, and said to him:

“Come here a minute. I want you in the sanctuary”.

The monk went into the sanctuary- he may have been the duty priest, I’m not sure. Be that as it may, the Elder asked him into the sanctuary and I was just behind, listening. I expected trouble and perhaps a quarrel.

And what was the quarrel? No sooner had the monk come in than the Elder made a prostration to him. Not just a bow from the waist. A proper prostration, down to the ground. And he made to kiss his feet. Naturally, the monk wouldn’t allow that.

The Elder said to him:

“Forgive me for upsetting you today. I ask your forgiveness”.

The priest was genuinely sorry for what he’d said previously. He saw the Elder’s great humility and it brought him to his senses.

The next day I went to Katounakia, to see Elder Efraim. I don’t remember why. Probably to get his blessing, because I’d just been ordained.

In those days, there weren’t any telephones at Katounakia, but as soon as I went in, Papa-Efraim said to me:

“What’s your Elder been up to? I saw, in the Spirit, an angel of the Lord holding a crown sooo big over the Elder”.

At first I didn’t understand what he meant so I was at a loss to explain. Later I realized it was the events of the previous day, when Papa-Efraim said:

That was Elder Iosif, a man of supernatural peace, humility and love.