The Beheading of Saint John, the Glorious Prophet, Forerunner and Baptist of the Lord – 1 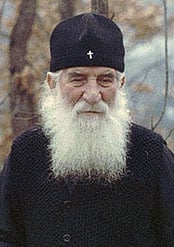 Today is a little Great Friday, a second Great Friday. Today the greatest man of those born of women, John, the Holy Forerunner and Baptist of the Lord, is slain. On Great Friday, God, was murdered, God was crucified. At today’s holy and great feast, the greatest of all men was put to death. The choice of the expression ‘the greatest’ is not mine. What are my praises of the great and glorious Forerunner of the Lord, when the Lord Himself praised him more than anyone among men, more than any of the apostles, the angels, the prophets, the righteous, the wise? The Lord declared: ‘among those born of women there has arisen no one greater than John the Baptist’ (Мatt. 11, 11). In all Creation, there exists no greater praise.

This is why today is a little Great Friday. Just think: senseless people murder the greatest of the righteous. Is he an obstacle to them?  Yes, because he comes between the perverse King Herod and the dissolute Herodias. God’s Truth, God’s immutable Truth is an obstacle to the lawless, to poor sinners, to everyone overwhelmed by the various passions. Consider this: even today are Christ’s opponents not still shouting ‘Crucify Him, Crucify Him’? Even today, are not those who oppose Christ still demanding the head of Jesus of Nazareth?  They call for His head, as they call for the head of John the Baptist. 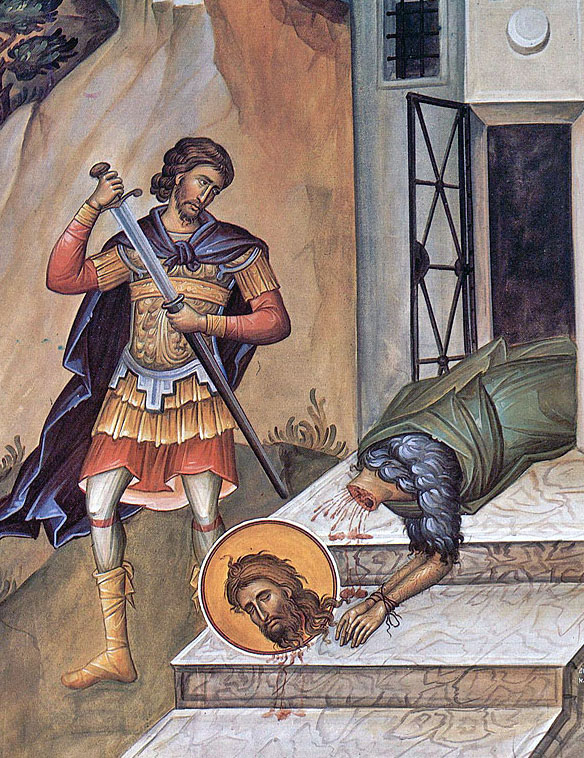 What is this? Can it be that the world’s become a madhouse? People don’t want God, they don’t want the greatest Righteous One in the whole world. Who do you want? Who would you prefer? Who would you put in Christ’s place? With whom would you replace St. John the Baptist? With yourselves? A moth! A tiny mortal insect! Yes, when people become maddened by pride, when out of egotistical pride they lose their mind, they’ve no need of God, they’ve no need of God’s Truth. They declare themselves to be gods. They present their petty, shallow, false version of truth as the great, saving Truth. They declare their shallow, earthly, perishable images of truth to be the greatest of truths: they think we don’t need Christ’s Truth, we don’t want God’s Truth. Yes, people blind in mind and spirit don’t see- and don’t want to see- that people, real people, can’t manage without God. Why? Because this world is full of Herods, full of Pharisees. Herods demanding the head of John the Baptist, Herods demanding the heads of all of the righteous of the world, and Pharisees, the lying scribes, the lying sophists of this world, demanding the death of Christ, the Incarnate God.

Yes, today’s Feast is a second Great Friday. Why? Because there’s no greater transgression than that committed on Great Friday and that committed now, when Herod destroys the greatest among those born of women. Why did the Saviour praise Saint John, the great Baptist, as He did no one else? Why? Because, my brothers and sisters, the Holy Forerunner encompassed within himself, within his person, all the virtues of heaven, all the virtues in all of the prophets, all of the apostles, all of the martyrs, all of the angels of heaven, all of the confessors.  Take note: today we glorify the slaughter, the beheading of the first apostle among the Holy Apostles, for the Forerunner of the Lord was the first sent by God to see the Saviour and to announce Him to the world. Long before the Apostle Peter, before the Apostle Nathaniel, before anyone else, he bore witness to and heralded God to the world, God Incarnate in the Person of the Lord Jesus Christ. The first apostle to see the Holy Spirit descending from Heaven onto the Lord Jesus, when he baptized Him in the Jordan, declared Him to be the Son of God, the Saviour of the world. He’s also the first evangelist among the Evangelists.  It was he who first manifested and announced to the world the Lord Jesus Christ, the Bearer of all Good Tidings for humankind.

The Lord Jesus Christ Himself is the Good News of heaven and earth, God’s Gospel for people in this world. ‘Behold the Lamb of God, who takes away the sin of the world’. In those few words, the Holy Forerunner expressed the fullness of the Gospels.

When the Lord set out to preach His Gospel, to preach with power, He took those words as the beginning and end of His Gospel.  From that moment, Jesus began to preach and to declare, ‘Repent, for the kingdom of heaven is at hand’ (Matthew 4, 17). This is why the Holy Forerunner is the first evangelist among Christ’s Evangelists.

Today, we must encounter an angel in the flesh, an earthly angel, and a celestial figure, St. John the Baptist. It was not only the Old Testament prophet Isaiah 40, 3) who called the Forerunner the angel of the Lord, but the Lord Himself, Who said this was an angel sent to go before Him to prepare the way for Him. (Matthew 11, 10). Not only a prophet, said the Lord regarding the Baptist, but greater than a prophet – the angel of the Lord. And people don’t want him; people drive him from this world!  The Holy Forerunner is truly the first angel in the flesh, the first among those who became the multitude of angels in the flesh, lamps bringing God’s Light, who lived on earth like angels of heaven, and were angels on earth, and in heaven remained God’s people, holy people.

Today we glorify the great feast of the first among the Prophets of the New Testament. He announced to men that the Lord Jesus Christ had appeared to the world not only as the Saviour, but as the Enlightener and as the Judge of the world.  In his hands were both the hatchet and the spade: on the day of the Dread Judgement, the Lord will clear the earth’s threshing-floor and will separate the wheat from the chaff, the righteous from the sinners. All of this the great and glorious Prophet, Forerunner and Baptist of the Lord foresaw. This is why, today, we also praise him as the holy New Testament Prophet, killed by the impious, criminal King Herod.

The Holy Forerunner also received the Lord’s witness to the fact that he was the greatest of those born of woman, because he was the first of all of the holy martyrs of the New Testament. See how he suffered for God’s Truth in this world. He suffered joyfully. In today’s main hymn and prayer to him it says that he rejoiced when he went to his death and when he suffered. In this way, he became the first example and inspiration to all of the holy martyrs of the New Testament, beginning with Saint Stephen the First Martyr, and [continues to be so] until today. All of the holy martyrs go to their death rejoicing in the Lord Jesus Christ: they go, knowing that death can’t hold them in its bonds, knowing that death is merely a gateway, an open entry through which their holy souls enter into the kingdom of heaven. How else, brothers and sisters, can we explain the joy of Holy and Great Martyr George when his body was being broken? His bones were being broken on the wheel, and he shouted with joy in the Lord, for he could see Him, could see the angels of God, standing around Him, and the angels stopping the wheel. See what joy [he experienced] during those awful tortures!  And the Holy and Great Martyr then stood up safe and sound before the impious Emperor Diocletian. The first one to reveal that holy joy of martyrdom was St. John, the Holy Forerunner and Baptist of the Lord.