On the Birth of Our Most Holy Lady, the Mother of God – 1 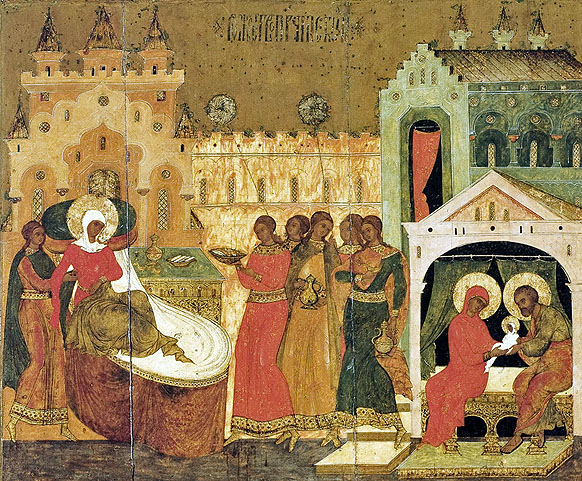 Today, the Virgin Mother is born from a barren mother and the palace is bedecked for the coming of the Lord Christ. Today, the bonds of sterility are broken and the gates of the Virgin are barred. Because, as the barren womb was dead for the purposes of child-bearing and yet, against all hope, brought forth a wonderful fruit, so, by the same token, incorruptible virginity is pledged and the miracle of birth-giving is heralded with works obvious to all. Because child-bearing without the intervention of a man is a supernatural miracle, as is the preservation of virginity after birth. Another person who overcomes the laws of nature is the barren woman who conceives in her old age and gives birth.

And with all  the miraculous events that take place, presages the birth of the Virgin. Today Anna reaps the fruit which came from the reproach of childlessness and the whole world enjoys the fruit-laden stems of joy. Ioakeim is named as the father of the child, as we receive the honour of adoption as a pledge… The Virgin comes from a barren womb, though even had it been fertile the birth would still have been remarkable. Such a great miracle. When the time for sowing had gone, that’s when the harvest came; when the flame of desire had been extinguished, that’s when the taper of child-bearing was lighted. Youth did not bring a flower, but old age sent forth a shoot. The belly didn’t swell when nature was at its peak, but an ever-virgin infant appears as the offspring of an elderly womb. 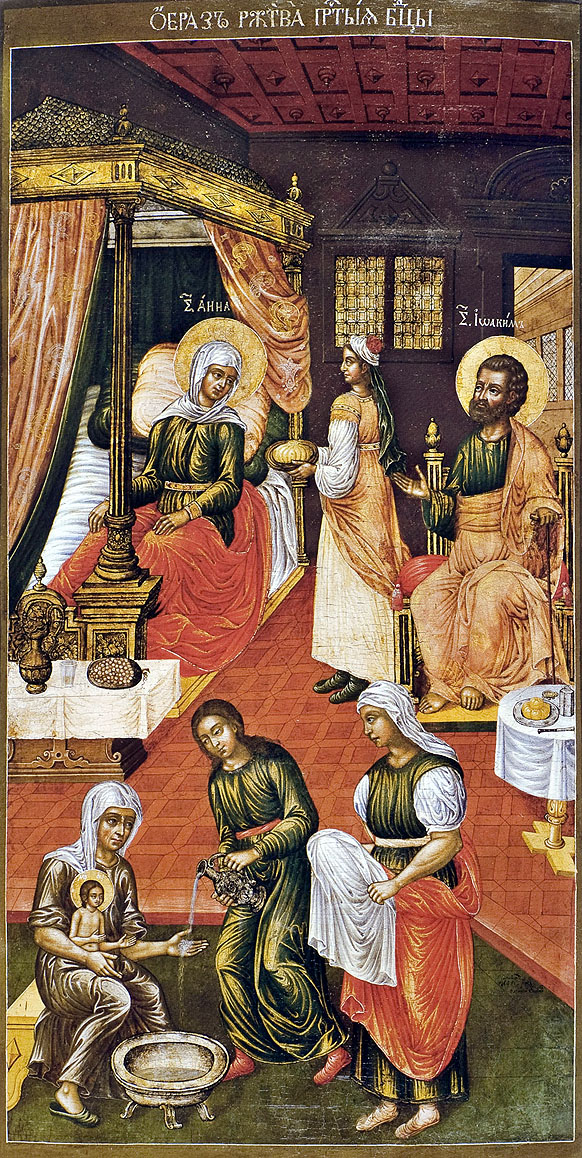 The Birth of the Mother of God, Russian Icon, 18th Century

But people wonder at a barren woman giving birth. They want to investigate in detail what they should simply be marvelling at, and get into arguments over what happened. If she’s barren, she can’t give birth; and if she gives birth, she isn’t barren. And how do breasts that are dry become a source of milk? If it’s not in the nature of old age to store blood, how did the breasts make into milk that which they didn’t have? And how does a womb that’s become inert function and give life to, form and feed the embryo? These are no more than stumbling-blocks for yourself and your salvation. And who are you, in any case? Why can’t you be among the believers who are worthy of the miracle? Did Sarah not see Isaac, the son of her old age and barrenness? If Anna upsets you and troubles your thoughts, how much more so should Sarah, because she was the first it happened to. If these things make you doubt, don’t you realize that you’re writing off other people from kinship with you; you’re cutting the roots from which you might be a branch…

From olden times, then, even though human nature was in thrall to the power of the ancestral sins, child-bearing on the part of those who were barren has heralded that fact that He Who destroys them [the sins] will bring it [human nature] out of servitude and free it from tyranny. This is why, when they had been cleansed of the grime of their transgression and had rejected despondency and gloominess, Adam and Eve, with free voices and looks, are present in joy at the festival of the Virgin and probably have become the leaders of the dance. Because it is fitting that they, from whom came the seed of sin which grew like a parasite and infested the human race, should be at the forefront of the rejoicing, now that it has been uprooted…

In other words, because the sickness of the transgression was transmitted to everyone else by the first perpetrators and we all have the need for the same cure, and since today the foundations of universal salvation are laid with the birth of the Virgin, we should organize a common and all-embracing festival, in order to sing public and heavenly hymns of praise. Because the universality of salvation demands celestial thanksgiving.

Let us therefore send up hymns of thanksgiving, since Adam is recreated and Eve is renewed. Together with this, the curse is lifted and our human nature, casting off the dead skin of the mask of sin, takes back the form of its ancient honour of the image of the Lord. Let us send up hymns of thanksgiving and gather, all together, as one, because with the coming of the Virgin from a barren womb, the barrenness of nature is sanctified, its fruitlessness has had grafted onto it the rich fertility of the virtues… The ladder which ascends into the heavens has been constructed and earthly nature, exceeding its bounds, resides in the celestial dwelling-places. The Lord’s throne is prepared upon the earth, earthly things are sanctified, the legions of the heavens mingle with us and the Evil One, who, in the beginning deceived us and became the instigator of the plot against us, is hoist with his own petard.

Who can tell of the wondrous works of God? What words can express the power of things which are beyond words? And how would any mind not freeze, trying to understand the magnitude of the works. In the first place, God made people because He was motivated by an incommunicable abundance of love for us, giving the created being the grace to bear the power and the image of its Creator, in the nobility both of the flesh and of the spirit. Paradise, a thing most pleasant and beloved, was planted in the East, all fragrant with the flowers of the meadows and indeed full to overflowing with attractive and varied fruit from trees.

There were also rivers flowing through it, irrigating the grounds with pure water and lending an improbably fine beauty to the place. It was in this place that the Creator placed the artefact of His hands, making him lord over all and surrounding him with all manner of good things.  He later gave him a wife, having first taken a rib from his side to perform the inexpressible vivication in such a way that the woman would recognize her donor as the head [of the family] and would be devoted to him and would keep in mind her obligation to create between them a link of harmony as well as the link of nature.