On the Birth of Our Most Holy Lady, the Mother of God – 2 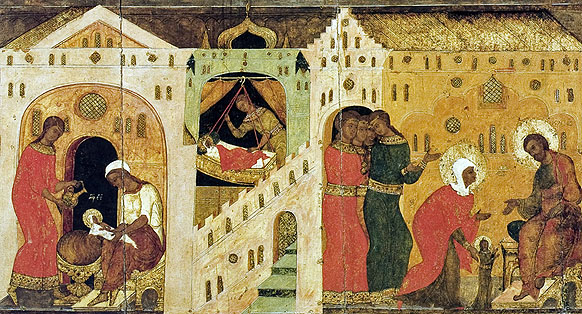 But once He had granted the usufruct and overlordship of all things in Paradise, He had to train the people he had entrusted with such great authority. He gave them a law, which was neither difficult to observe, nor extremely easy to keep in its totality. Through this they would gain either their reward or their condemnation. So He set aside one plant among all those which were flourishing there and issued the commandment that it was forbidden to eat of this one alone. But an evil beast and the principal of wickedness, using as his tool a serpent and directing towards the woman seductive and attractive words and casting all kinds of blasphemies at the Creator, convinced the woman- and, through her, her husband- to ignore the commandment and to eat of the fruit that they had been told to avoid. They did so, and, in that moment, broke the commandment and lost all the gifts, which is exactly what the Evil One had plotted for. This is what the entire intrigue had been aimed at. Thereafter, by transmitting the lapse from ancestors to descendants, the plotter had the whole of the human race in thrall to his authority.

So what did our Creator and Guardian do? Did He leave His creation to be tormented for ever, to be a slave of the passions? Of course not.  How could He bear to see what He had made from an abundance of love made a prisoner and living in delusion. This is why, when the unity of the Holy Trinity had convened with Itself (if I may be permitted to express myself thus), It arranged, through Its uniform will, that the creature which had been devastated should be remade (we ought to talk of “remaking” because “Let us make people in our image and likeness” had been said of the original creation). But because people had become so barbaric and had sunk to such depths that they would not return, irrespective of threats, punishments or [the words of the] prophets, God required a person who would have our own nature, one in whom He could see the law being observed to the letter, so that people could compare this with the actions of others and so that the plotter against us might be cast down from his domination over us by a legitimate struggle and victory.

So one of the persons of the Trinity had to descend, to be among people so that the new creation could show forth the true character of our original nature. And He would have to become a Son here and not dishonour His office above, which He had held for ever and was glorified for. But He could not come into the midst of the sons of Man without an incarnation. Because incarnation is the way to birth and birth is the culmination of pregnancy. And this naturally required prior preparation. A mother had to be prepared here on earth for the Creator and for the recreation of those who had been devastated. She would have to be a virgin, so that, just as the first person was made from virgin soil, the recreation would occur through a virgin womb, without the involvement of any sensual pleasure. Because the people whom the Lord wished to liberate, by consenting to be born, were enslaved to sensual pleasures. 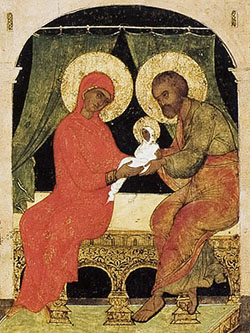 But who was worthy to become the servant of the mystery. Who was worthy to become the Mother of God and lend flesh to Him Who enriches the universe. Who was worthy? Clearly, she who today has budded in a strange manner from the barren root of Ioakeim and Anna; she whose luminous birth we celebrate and whose advent marks the beginning of the miracle of the greatest mystery, I mean the incarnate birth of the Saviour; she for whom this divine and all-embracing assembly has been called. Because it was right and proper that she who had preserved her body in purity from her early infancy and maintained her soul and thoughts in purity should have been destined to be the mother of the Creator. It was right and proper that she  who as a young child was offered to the temple and entered rooms untrodden should be the animate temple of Him Who gave her her soul. 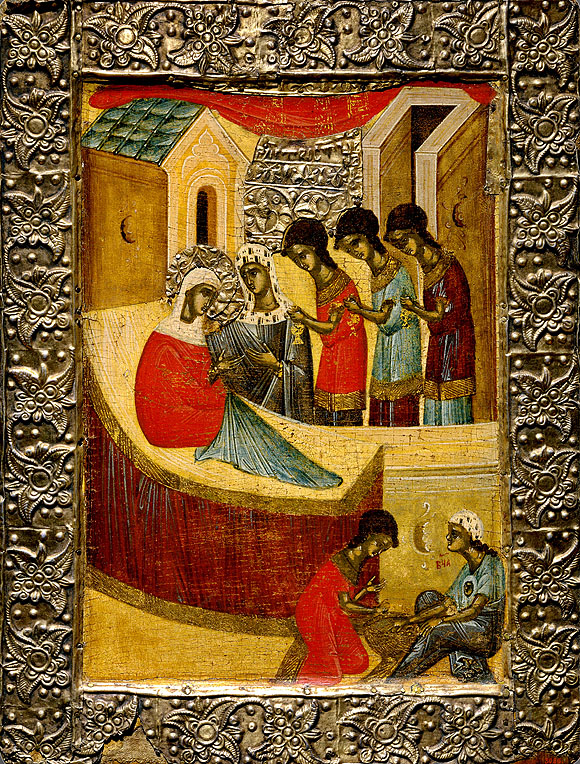 The Birth of the Mother of God, Russian Icon, 15th Century, Tver

What a miracle! He Whom the whole of nature cannot contain fits comfortably into a virgin womb. He, on Whom Cherubim and Seraphim do not dare to gaze, is cuddled in the lap of the Virgin, held by her arms of clay. From the arid and barren womb comes the holy mount [the Virgin], from which, once the precious corner-stone, Christ our God, had been miraculously hewn, He destroyed the temples of the demons and the kingdom of Hell along with the tyrannical dominion itself. The animate and heavenly oven was prepared on earth and in it any weeds were burnt before the pure dough was inserted by God to make bread for Himself. But what can anyone say about the multitude of gifts and achievements of the Virgin? We are diffident and joyful, calm and excited. And then again, we lose our voice and find it, shrink and expand, motivated, on the one hand by fear and on the other by desire…

But you, Virgin and Mother of the Word, our atonement and refuge, who in wondrous wise were nurtured by a barren woman and who bore for us, even more strangely, the ear of wheat Who gives life, pray and intercede with your Son and our God for us, who hymn you, that we may be cleansed from the stain of all pollution. Make us worthy of the heavenly bridal chamber where we shall enjoy eternal rest, brightly illumined by the triple light of the supra-essential Trinity and lose ourselves in the mystical and ineffable sights, through the grace of Jesus Christ our Lord, to Whom belong glory and power unto the ages of ages. Amen.

Saint Fotios the Great, Patriarch of Constantinople, Homily 9, On the Birth of the Our All-Holy Lady, the Mother of God (excerpts).