The Achievement of Faith (11th Sunday of Luke- of the Forefathers)

The dismissal hymn for the feast of the Holy Forefathers, says: ‘You [i.e. Christ] justified the forefathers in faith, and through them betrothed Yourself, in advance, to the Church taken from out of the Gentiles’. These words, if you look at them carefully, are full of profound meaning. The Forefathers were justified, as being the foundation of the Church and as making manifest the cause of the relationship between God and us.

Who were the forefathers of God? Pagans, of course. Everybody was pagan then. After the fall, people lost their way and followed their own path. From these, God chose a few and called upon them to believe in Him and to follow Him. And they were convinced. Through faith they accepted the call from God and became His friends, so that, when God was revealed, it could be said of Him: ‘I am the God of Abraham and the God of Isaac and the God of Jacob’. 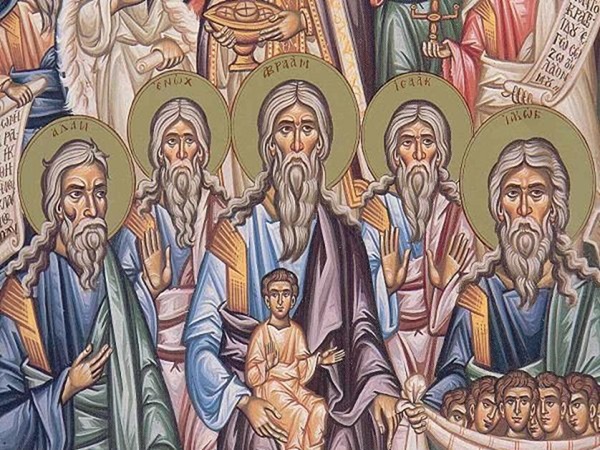 Through the faith they accepted and in which they followed God, they reached such heights that, when He was revealed, God was called their God. And in this way, a bond was formed, an affinity, a relationship. And this powerful bond was born purely from faith: ‘You justified the forefathers in faith’. Do you see what a great thing faith is? This is precisely what God asks of us. And then there’s the wonderful hymn of Saint Paul. This isn’t merely an epistle, an essay written by an enlightened man; it’s a hymn crafted by God. ‘By faith they [the holy forefathers] who through faith conquered kingdoms, administered justice, and gained what was promised; who shut the mouths of lions, quenched the fury of the flames; whose weakness was turned to strength; and who became powerful in battle and routed foreign armies. Women received back their dead, raised to life again… Some faced jeers and flogging, and even chains and imprisonment. They were put to death by stoning; they were sawed in two; they were killed by the sword’ (Heb. 11, 33-37) and so on, as you all know.

All these feats, all these triumphs which extended and completed the relationship between the human race and God were born of faith. It’s this that saves us. It’s faith that extends into each of us and into the faithful as a whole and it’s precisely this which justifies everything.

Now we come to a deeper mystery. All these forefathers were those who by revelation were called, and therefore it was to these people that blessings would be given, because God foreordained them, called them and stayed with them, so that He could boast of being their God. They received His promises directly and spoke to Him in person. And yet, despite the certainty of the promise which was most effectively demonstrated to them, they earned their godliness, devoutness and focus on God in general through a heavily-laden cross, that is sorrows, pains, persecutions and tribulations, to the extent that they almost departed this world before seeing any of the things God had promised, except as symbols and the occasional insight. Do you see the mystery? In this vale of tears, God’s promises are partially seen, partially understood and partially revealed. This is precisely what is meant by ‘Who is wise, and will observe these things, and understand the mercies of the Lord?’ (Ps. 106, 43). This is how we who are called through faith must stand fast and implement our commitment to the Lord and to His promises. Interpreting faith through limitless patience, long-suffering and endurance, throughout our various trials and temptations, we, too, will be made perfect, as will all His children.