Saint Gregory Palamas and the Hesychasts (2nd Sunday in Lent)

The second Sunday in Lent is devoted to Saint Gregory Palamas (14th century), a hesychast from the Holy Mountain and later Archbishop of Thessaloniki. 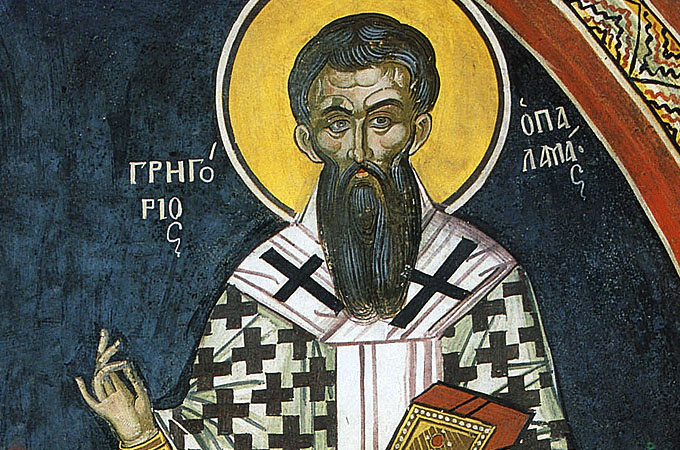 Saint Gregory Palamas defended the hesychasts of the Holy Mountain who were being mocked and attacked by the person who expressed the spirit of the Western Church, the monk Barlaam, from Calabria in Southern Italy. When Saint Gregory defended these monks, he set out the Orthodox faith regarding God, the way we can approach Him and what it is that constitutes the salvation of humankind.

If the faith is altered, every in the slightest way, then our life ‘in  Christ’ is modified and the salvation of humankind is aborted.

Among those who altered the true faith of the Church is the Church in the West. What’s the basic difference between it and the Orthodox faith? The main characteristic of the West is intellectualism. The source of the faith of the Orthodox Church is the relationship between people and God. First God, then people. The Apostles said ‘It seemed good to the Holy Spirit and to us’. ‘To us’ refers to the Apostles, who followed the Holy Spirit. The Orthodox Church attempts to approach the mystery of God, experiencing the life of Christ, so far as this is possible for people, depending on the degree of their relationship to God. On the internal purification and the amount of Grace they receive from God, whereas the West attempts to approach God intellectually, through human reason and the knowledge of nature. But the mystery of God is ‘beyond reason’. How can reason understand it?

Barlaam censured the Hesychasts of the Holy Mountain who, in order to come closer to God,  strove to purify their souls with ceaseless prayer, so that the glorifying Grace of the Holy Spirit would dwell within them and they could make a reality of Christ’s words,- which have become a tradition in the Orthodox Church-: ‘Blessed are the pure in heart, for they shall see God’ (Matth. 5, 8). This tradition was foreign to the West and unknown there. This is why, in the discussions he held with Saint Gregory Palamas, Barlaam, who expressed the Western spirit, claimed that the further people progressed in knowledge, letters and philosophy, the better they know God and come closer to Him. The essence of the matter is in the intellect, not in the ‘purification of the heart’, as Christ said. Saint Gregory disagreed, because, apart from anything else, this left the poorly-educated and illiterate without hope of salvation.

Who were the Hesychasts? Those who, in their lives, sought ‘quietude’, which is not merely the avoidance of external noises, that is noise pollution. It’s easy to find that quietude if you leave the world around you. What is difficult is to achieve inner quietude once you’ve cast out the internal turmoil created by the worldly way of thinking and conformation to it, the cares of life, the desire for riches and an abundance of goods, thoughts of the flesh which ‘engender sons and daughters in the heart’ (Evagrios), the fire of sensual urges and the general tendency towards sin. All of this creates ‘inner confusion’ and turmoil. When these are absent, the Grace of the Holy Spirit comes into the heart, making people content and peaceful.

In order for this desired quietude to come, what is required is a struggle against all the things that constitute their old nature. They must become Christians, soldiers of Christ, ‘immaterial and free from care’, ‘untouched by any desire’ and must cast ‘all their cares onto the Lord’. Their lives should become unceasing prayer, with Christ dwelling in the heart, bearing the fruit of true quietude. People who succeed in this effort are called hesychasts. This is the condition that people were in before the Fall, that of Paradise.

From the first centuries of Christianity there were hesychasts, who, through their way of life, stamped the nature of the spiritual life for all the centuries to come. They abandoned the cities and ‘urbanized the desert’, not to turn away from the world, but in order to devote themselves entirely to God. They brought the problems of the world to the altar and, through their prayers often brought an end to droughts, earthquakes, wars, epidemics of sickness and so on. Anthony the Great, for example, ‘supported the world with his prayers’, according the Church hymn.

These were the people that Barlaam censured and made fun of, because he didn’t have the experience of asceticism and unceasing prayer. ‘Let God be intellectualized’, Saint Gregory said of him. That is, for Barlaam, God was an object for intellectuation, an idea, whereas the Hesychasts ‘suffered the divine things’. For them God was a person, Whom they strove to attach themselves to. Through their asceticism and the ‘taste’ of the Cross, ‘they gave blood in order to receive the Spirit’. Barlaam considered the Hesychasts to be idlers. But what work in the outside world could raise people to the heavens and make them Gods ‘by grace’? None. Yet the ‘inactivity’ of the Hesychasts did so. This is why Saint Gregory says it is ‘above all activity’, because it ‘activated’ glorification.

This ‘inactivity’ is the unceasing prayer ‘Lord Jesus Christ, have mercy upon me’. Its brevity helped the mind to concentrate in the heart and cling to God. After its descent into the heart, it became their weapon against the devil. The prayer became imbued and held them, even if their bodies were busy with something else. Since it was one with their life, or rather was indeed their life, no physical labour prevented them from praying unceasingly. In Paradise, before the Fall, life was a continuous relationship and communion with God, and the Hesychasts re-entered this state- as far as they could. They managed to see the Uncreated Light, which Saint Gregory says is ‘hypostatic’, which means that it wasn’t merely a perceptible brightness, but light ‘in a hypostasis’, ‘in a person’. And that person was the Lord Jesus Christ.

As Saint Gregory notes ‘when prayer comes from a clear mind (free of all things perceptible), the mind emerges from the prayer, full of warmth, as if it has fire within it (the divine fire of Grace)’. He goes on to say that he thinks that the sweat which dripped from the face of the Lord during His agonized prayer in Gethsemane was the result of the internal warmth of the prayer.

Saint Gregory said that the Hesychasts put into effect the Lord’s Beatitude: ‘Blessed are the pure in heart, for they shall see God’. And the Lord promised that He would ‘dwell with them and walk among them’ (II Cor. 6, 16). To those who truly love Him, He promised that he would come with His Father and that They would making a ‘dwelling-place’ in their hearts.

The Hesychasts lived the Tradition of the Church that if you cleanse yourself of the passions, you come closer to God and are glorified and this glorification is your salvation.

Today, when we’re all so tired by the noise within us and without, the message of Saint Gregory Palamas is most apposite.

Let us return to ourselves, to contemplation, to concentration, to the quest for God and the relationship and communion with Him and then we’ll feel the contentment He promised us: ‘And I will give them rest’.