At Eastertide, at some undetermined place and year, the Emperor Constantine I made his Oration to the Assembly of the Saints, either in Latin (Oratio ad sanctorum coetum) or Greek (Λόγος τῷ τῶν ἁγίων συλλόγῳ). It is a lengthy and not terribly interesting text, but given the fact that the emperor himself was reading it, if you were sitting at the front it would have been politic to feign interest or at least try to stay awake. In chapter XX (out of XXVI), he makes a reference to Virgil’s Fourth Eclogue:

“Another Tiphys shall new seas explore;
Another Argo land the chiefs upon the Iberian shore;
Another Helen other wars create,
And great Achilles urge the Trojan fate”.

He goes on to explain the comparison by equating Troy with the world and to claim that Achilles was a type of Christ, fighting against wickedness. (Didymus the Alexandrian went even further, comparing not only Achilles and Christ, but Hector and the devil). This is not a comparison with which we feel comfortable today, I would suggest. Homer’s Achilles comes across as petulant and self-centred or, at best, a man with an overdeveloped sense of personal honour. Christ preached non-violence and was humble enough to die on the Cross for us, as Constantine rightly points out in the very first sentence of the Oration.

Outside this text, there is another very well-known link between Achilles and Christ- indeed, between Dionysus, Achilles, Alexander the Great and Christ. This is the artistic composition of the first bath of the god or hero, which passed into Christian culture as the icon of the Nativity of Christ.

What are we to make of this? Not, I think, the tired argument that Christianity is really just a continuation of the beliefs and images of paganism in another guise. All the evidence points to Constantine being a convinced Christian, perhaps even before it was safe for him to declare his faith: he did, after all, live at Diocletian’s court for a while, perhaps as a kind of hostage to ensure his father’s loyalty.

A more likely explanation, perhaps, is that the Gospel narrative is so spectacularly odd that people throughout the ages have struggled to make it somehow more familiar. So, yes, the icon of the Mother of God enthroned bears obvious similarities to the depiction of the goddess Rome, which itself may have been based on representations of Greek goddesses, but this is a long way from the Mother of God as she is described in the Gospels. It seems therefore, to be a question more of acculturation, of the way in which the Christian message is made “manageable” in a milieu outside the Holy Land of the first century. Constantine was addressing the tumultuous world of Late Antiquity and the core message of the Oration was the superiority of monotheism over the pagan polytheism. But he himself was a product of this world. He was well-educated in both Latin and Greek and, like most people  of the day, had a cosmopolitan way of seeing the world. It is likely that he felt that, in airing some of this knowledge, he was actually reinforcing the fundamental thrust of his oration. 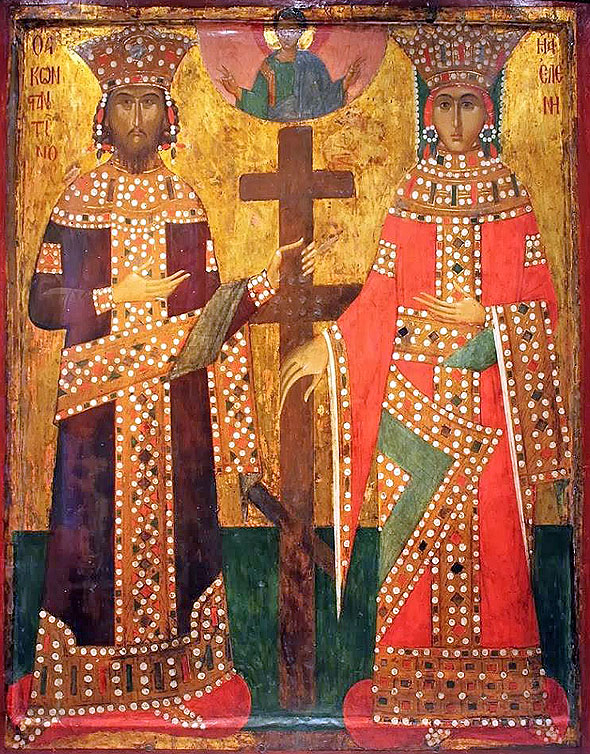 When one reads a life of Constantine, there is always a reference to the fact that his mother, Saint Helen, was from Bithynia and of lowly origins (“ex obscuriore matrimonio”). Indeed, Saint Ambrose refers to her as a “stabularia” (livery attendant at an inn), albeit “bona”. And that is usually that. But if we consider the circumstances, it is clear that Helen must have been remarkable. She attracted the attention of a young Illyrian army officer, Constans Chlorus, who was clearly able and ambitious (he ended up co-emperor) and held it to such an extent that he married her and remained with her until political expediency forced him to divorce her about twenty years later. There is a suggestion that Constans and Helen were not legally married, but given the acceptance of Constantine as legitimate and Helen’s later elevation to the rank of Augusta, this seems unlikely. When they met, Constans was campaigning in Asia Minor and already making a name for himself as a coming man. He could have had his pick of a bride from any but the most aristocratic families. Such a bride would have brought him wealth and influence which would, in turn, have furthered his career. And yet there was something about Helen, the daughter of a poor inn-keeper, which made Constans (who must, in any case, have been a good judge of character, given his position and ambitions) marry her and keep her at his side even on campaign. What that was, we shall never know, but the circumstances of her marriage to the future emperor are in themselves sufficient to indicate that she must have been an arresting person in her own right.