This is the same Holy Spirit Who preached by the prophets, Who gave understanding to the Apostles, Who spoke to people. He was given to them by the Lord, and all their adversaries were unable to gainsay or resist Him. As the Lord said: ‘It is not you that speak, but the Spirit of your Father Who speaks in you’.

This Holy Spirit also or¬dains priests, consecrates churches, purifies altars, perfects sacrifices and cleanses people of their sins. This Holy Spirit abides with the godly, refines the righteous and guides kings. This same Holy Spirit preserved the soul of Simeon, lengthening the time of his life and re¬versing the rules of death, until the day when he beheld Him Who is the Redeemer of life and death. Because he had been promised by the Holy Spirit, that he wouldn’t see death before he had seen the Lord’s Christ. 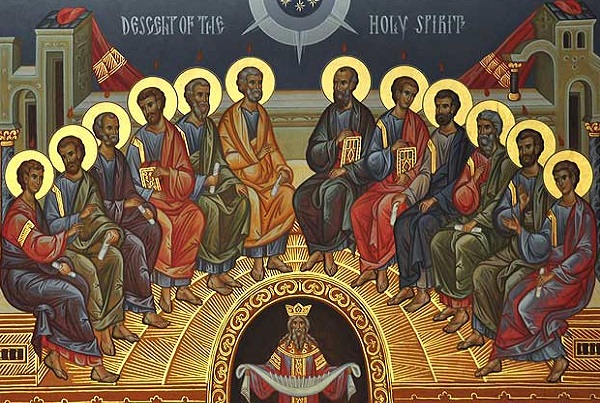 It was the same Holy Spirit Who gave strength to Elijah, and Whose power Elisha desired when he asked of Elijah: ‘I pray you, let there be a double portion of your spirit upon me’.

This Holy Spirit enlightens souls and sanctifies bodies. It is the same Holy Spirit Who descended upon the Apostles and filled them with divine wisdom. Once they had received His gifts, they were all filled with the knowledge of God. Not only were they given divine knowledge, but also spiritual gifts. Simon Magus was a stranger to the Holy Spirit, and fell to his perdition. As Peter said to him: ‘May your money perish with you, because you wanted to purchase the priceless grace of the Holy Spirit thereby’.

Therefore, my friends, let us strive to keep our bodies undefiled. Because those who have acquired a new body, which is a temple of the Holy Spirit, have become true victors over the devil. May what the Spirit of God has said come to pass in me.

Moreover, Joseph, strength¬ened by this same Holy Spirit, asked that his body not be defiled by the vile deeds of this life, since he knew that the Spirit has no truck with a body involved in sin. In this way, he earned a royal rank. This Spirit enlightened Bezaleel, so that he fashioned the tabernacle with great beauty and skill. Joshua, the son of Nun, possessing the same Spirit, be¬came a faithful heir to Moses and obtained the inheritance of the Promised Land for his people. As God said to Moses: ‘Take to yourself Joshua the son of Nun, a man who has the Spirit of God in him’.

This is the Spirit of Whom the Lord, Who, when He breathed upon His disciples after His Resurrection from the dead on the third day, said: ‘Receive the Holy Spirit’. And, again, it’s the same Spirit Who has vouchsafed to give eternal life to the faithful after the general resurrection from the dead, as is written: ‘You will send forth your Spirit, and they shall be created; and You will renew the face of the earth’.

The gifts of the Holy Spirit are many, varied and all-powerful. As it says in a certain place: ‘By the Word of the Lord were the heavens established, and all the might of them by the Spirit of His mouth’ [Cf. Psalm (Sept.)]. And Isaiah says: ‘The Spirit of God shall rest upon him, the spirit of wisdom and understanding, the spirit of counsel and strength, the spirit of knowledge and godliness’. Saint Paul adds: ‘The Spirit of adoption and of grace’.
God’s Son and Word, Who is equally ever-existent, and equally without beginning, and Who shares the throne and the honour of God, called this Spirit ‘the Spirit Who is our Comforter’. David calls Him the Holy Spirit, since the Holy Spirit is sent by holiness; the governing Spirit, since He has dominion over all, be¬cause all things came from Him and are kept in existence by Him; and the good Spirit, since salvation and all manner of goodness are from Him.

He is one in essence, one in principle and one in counsel with the Father and the Son. Do you wish to believe? Listen to what the Scriptures say of Him: ‘When He prepared the heaven, I was present with Him’. The prophet [Isaiah] further says: ‘The Lord, and His Spirit have sent me’.

Lest anyone think, from what was said, that this new Spirit would come from any creatures living or yet to come, or from any other person, He says: ‘And I will put My Spirit in you’. In the Acts of the holy Apostles, this was ex¬pressed in commandments: ‘The Holy Spirit said, “Separate Barnabas and Saul for me, for the work to which I have called them’”. And again,
‘It seemed good to the Holy Spirit, and to us’ and ‘I will put My Spirit in you’.

Would you have it demonstrated that this was indeed His coming, as was foretold in parables, and that it was His grace acting upon the holy Apostles? Will you believe what was said? Listen to St. John the Evangelist, who says: ‘The Holy Spirit was not yet given, because Jesus was not yet glorified’.

Moreover, the Spirit is called the Comforter, because He’s also our advocate with the Father. And not only is He with the Father, but He’s always with us, too, as a gift.

‘And I will ask the Father, and He will give you another Comforter, so that He may abide with you forever’, comforting your hearts and making them steadfast in divine patience and trust in Christ. Given that the holy Apostles re¬ceived this testament after Christ’s holy Resurrection from the dead, and that they were sent forth to teach and to baptize in the name of the Father and of the Son and of the Holy Spirit, and since we’ve already been vouchsafed this true washing by the Holy Spirit, let us strive to keep our souls and our bodies undefiled as we glorify the Most holy and consubstantial Trinity, the Father and the Son and the Holy Spirit, now and ever and unto the ages of ages. Amen.