Repentance and Prayer according to Saint Païsios

In general terms, Saint Païsios set the greatest store in the spiritual struggle on repentance and unceasing prayer. It was through repentance that he received revelations from heaven. He used to say that the life of a monk was one of repentance and prayer. The monks are the Church’s wireless operators and the aim of their life is to get through to God in order to help people, once they’ve first cleansed themselves of the passions, which are like atmospherics interfering with good communications with the Lord. This is why he used to say that we should ask God only for repentance, so that we’d be washed, because repentance is divine soap in prayer. A sigh of repentance in prayer is worth more than two buckets of tears. The beginning of the work of prayer is examination of our self and knowledge of our sins. Because, if we lack an awareness of our sins, how will we ask God for divine mercy? Pray is helped by our sense of sinfulness. But if we’re going to repent, we have to know ourselves and our weaknesses. We need to consider what God’s given us and how we’ve responded to His gifts. How has God behaved towards me and how have I behaved towards His love? The thoughts of a monk or nun constantly revolve around this question. They see that everything’s a gift from God and that only their sins are their own. This is the reason why we should be truly contrite. 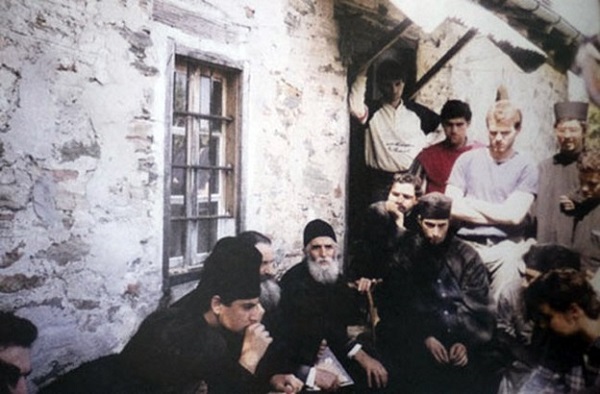 Before we begin to count the knots on our komboskini, it’s a good idea to count our many sins and God’s blessings. An awareness of God’s blessings helps us to say the Jesus Prayer from the heart, rather than mechanically. Genuine repentance brings with it humility and it’s from there that prayer starts. Before we start to pray, we should say: ‘I’m to blame Christ. I’m ungrateful and I’ve saddened you. Forgive me’.

Prayer requires proper preparation, just as Holy Communion does. It’s holy communication, because we’re communing with Christ and talking to Him.

We should read something succulent from the Sayings of the Desert Fathers or other spiritual books. Study of the holy Gospels also helps a great deal; even if we don’t understand the meaning of the words, the soul is sanctified and nourished spiritually.

If monks and nuns don’t stick to their prayers, they’ll suffer needlessly. They should avoid excessive talking and find contentment in prayer. This is why they’re called ‘solitaries’, because they live alone, with God. In order to stimulate us to pray harder, he used to say that every moment of our life which passes is irrecoverable. The Jesus Prayer is a weapon against the devil because the name of Jesus is all-powerful. The aim isn’t to acquire unceasing prayer but to divest ourselves of the persons we once were. He used the Psalter a great deal in his prayers and said it was a lightning bolt against the devil.

Another aspect of the struggle in payer is love for our neighbor. Christ is content when you love your neighbor and make them content. This is why the saint stressed the dignity of our neighbor. He used to say that when people act spiritually but neglect everything else, sacrificing themselves and so on, then the spiritual deeds are also useless. Since he loved Christ and the Mother of God so much, he also loved other people. No matter how tired he was, he sacrificed himself for others; he was completely indifferent to his own needs, his rest or his health. He said that if someone else was suffering he would willingly die to help them. If we have a problem and we worry about it, that’s a sign of lack of faith. But if we worry about our brothers and sisters, that shows the pain of love. God gives great comfort to us when we feel the pain of other people, otherwise we couldn’t bear it.

He advised that we pray for the dead, because the poor people can’t do anything to help themselves; so we should intercede on their behalf. He prayed constantly for the glory and unity of the Church and often, during prayer, he received enlightenment on ecclesiastical problems.

Saint Païsios’ relationship with Our Most Holy Lady, the Mother of God was characterized by the deepest devotion and love and he inspired this love for her in all who came to him. It appears that this holy relationship with Our Lady was planted within him during his childhood years. This was a legacy from Saint Arsenios the Cappadocian to the man who would continue his work. Saint Païsios received many assurances and miracles from the Mother of God some of which he recorded in writing.