Did Our Lady give birth to God? Was God born of a woman?

Saint Cyril of Alexandria wrote that the Mother of God sanctified the Holy Trinity! At first sight this is a scandalous statement. How could a human being sanctify the Holy Trinity? And if that statement’s challenging, there are people on the other side who doubt and deny that Our Lady gave birth to God at all.

How can the created be born of the uncreated? In ancient Greek thought, this was impossible. Far beyond a state of doubt. Completely untenable, since, in Plato’s Symposium we read that ‘God doesn’t mix with people’ [203a1–2]. So how does God, Who is perfect, commune with sinful people, a question found among the Neo-Platonists? In no way. There is no possibility of the perfect communicating with the imperfect. This is what Nestorius claimed. And this is why he didn’t call Our Lady ‘the Mother of God’, but preferred other terms which denoted her human nature and, therefore her created finiteness (for example, ‘Mother of Christ’, ‘Mother of the Lord’, or ‘Mother of a man’ and so on). 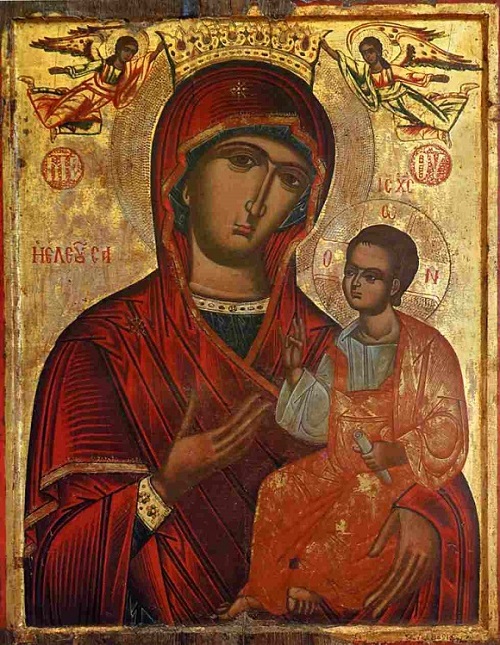 What, then, did Nestorius say, under the influence of Neo-Platonic thought? ‘Let no-one call Mary the Mother of God, because she was human and it’s impossible for God to be born of a human’. Of course it is! Nobody, given their right to self-determination and their created powers of endurance could have, or has, the power to perform such a miracle. But then along comes Saint Proklos of Constantinople, who destroys the moralism and insurmountable piousness of Nestorius by saying that ‘a human person can’t give birth to God, but God can be born of a woman’. This is dispensing with the laws of nature, the laws which inform the sequence of time and also the woman’s inability to exist outside the divine creative power. This is why, on August 15, the Church sings: ‘the laws of nature have been overcome in you, Spotless Virgin’ (Ode 9 of the feast, first canon).

And while it was impossible for ancient Greek thought to accept that God communicates with people, the whole of Patristic wisdom talks about the opposite*. And also shows the way in which we can become sharers in divine Grace. So the ‘ineffable, incomprehensible, invisible, inconceivable God’ (prayer in the Divine Eucharist) becomes a human being and is accommodated in the womb of a virgin. This is God’s absolute affirmation to us. God’s ‘Yes’ to our weakness and failure. God’s ‘Yes’ to human nature, which was sullied but not destroyed. This is why God dared to breach nature, its laws, and to confound human reason. He emerges from the security provided by His triune existence, not in the least frightened that He’ll lose His essence, His properties, and He strikes at the root of intellectualism and sensualism. So God decided and chose to move towards humankind, since we’re weak. The ‘unmoved mover’, in Aristotle’s phrase, moves towards the human race and is given flesh in the womb of the Mother of God, without overriding her freedom of choice but with her ‘consent’, as Saint John the Damascan notes.

Logic dictates that the created and uncreated are irreconcilable and cannot conceive of any way of bridging the gap. Here, too, ancient Greek thought was unable to grasp the way in which God could communicate with us people. That’s logical, but doesn’t mean it can’t happen. The gap is bridged by the uncreated energies of God within creation, nature, people and, in the end, within history itself. Besides, according to Saint John the Damascan, the irreconcilability lies in nature (‘it is always removed from God not by place but by nature’). His nature is forever inaccessible, but not His revelation. This leads Saints Basil the Great, Gregory of Nyssa, John the Damascan and other Fathers to speak of the revelation of God through His energies, which, of course, are not to be confused with His actual Being, but are the revelatory presence of God in creation. This is why Gregory of Nyssa says ‘Through His energies, He leads us by the hand to the investigation of the divine nature’.

The age of despair and bewilderment is dead and buried. The power that the misanthropic and thrice-cursed Lucifer had isn’t eternal. God is love and His love is not merely one of His moral properties. The whole of history demonstrates that He has never abandoned us. He hasn’t left us out of paradise, but has given it to us to reside in forever. Otherwise, why was He born of the Mother of God? Why was He crucified? Why did He rise? He’s love and acts out of love. He entered the womb of the Mother of God, who was able to accommodate Him when heaven itself is unable to.

And He became incarnate. Not in order that the Son of God could be punished in our stead, as Anselm said. God doesn’t punish the sinful human race, nor His Son. At the opposite pole from these moralistic and pious Protestant ideas, we have Gregory the Theologian who declares that God became incarnate in order that we might be sanctified.

People are now in deep despair, ontologically and existentially, because it seems we’ve been deprived of the right to transfiguration, to resurrection. In the face of this despair, we have Gregory of Nyssa, who, acknowledging human pain, sighing, bewilderment, distress and sorrow says: I always weep when I remember Eve’s disobedience. Then, when I recall and understand the fruit of Mary, the Mother of God, I feel a new person. Come, peoples, and let us all hymn the One Who was born of a virgin, in glory and character the Godhead from before the ages, Who took upon Himself our poverty. The magnificent authority Who exists in the form of God assumed the form of a servant. He Who is carried by the cherubim and hymned by thousands of angels, came to dwell in the world. He Who was before all the ages and Who saves the world was born of a virgin in order to give life back to Adam’ (Gregory of Nyssa, Encomium on the Annunciation of the All-Holy Mother of God).

*Much of the theology of the Church was originally formulated to counter heresies, which were often the result of Greeks being unable to absorb Christianity into the framework of ancient Greek thought. This led a frustrated Tertullian to declare: ‘What has Athens to do with Jerusalem?’ (De praescriptione haereticorum [On the prescription of heretics], chapter 7). WJL.