‘Had you not shielded and interceded for us…’

‘We, though unworthy, never cease from telling your mighty works, Mother of God; for had you not shielded us and interceded for us, who would have delivered us from such dangers’. We raise our voices and sing this in the supplicatory canons, in recognition of the importance of the intercessions of our holy Lady the Mother of God on our behalf. At the same time, we also call her ‘mediatrix’,‘We have you as a mediatrix’ we sing. ‘Unchanging mediatrix before the Creator’, confesses the hymnographer, addressing our most holy Lady, in whom we place all our hope.

‘To mediate’ means ‘to intervene’, ‘to negotiate’ between two people or groups in order to reconcile them or to reach an agreement. ‘To intercede’ means to act as an ambassador, as an emissary. The saints are those worthy members of the Church who, with their boldness before the face of God, mediate and intercede- that is pray to him and supplicate on our behalf. How much more so does Mary, the Mother of God, who offered herself so that God could enter the world? 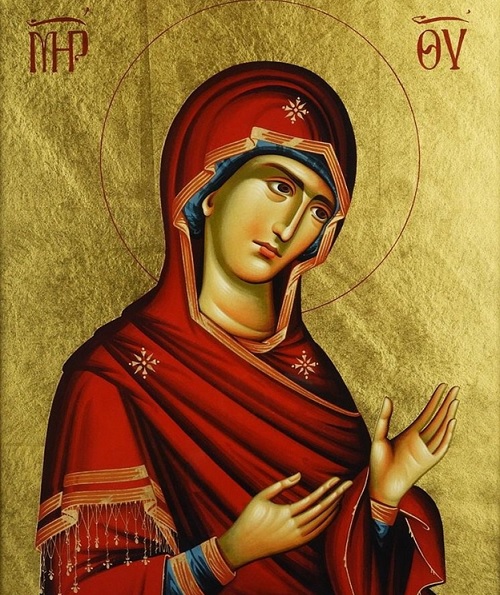 Our Lady, Mary the Mother of God, mediates continuously with her Son on behalf of humankind. As mediatrix she brings us to Christ and intercedes for our salvation. There are so many sorrows and calamities in life which shake us to the core that we seek the protection of our most holy Lady, entreating her  and saying: ‘… receive the petitions of your unworthy suppliants, so that you can mediate before him who was born of you. Mistress of the world, be our mediatrix’.

Unfortunately, the Protestant heresies and the Jehovah’s Witnesses deny the intercessions of the saints and the Mother of God. The absurdity here is that, while these same heretics consider it their duty to pray for other people, they deny our most holy Lady this capability and right. Indeed, they quote a passage from scripture where Saint Paul says that Jesus Christ is the only mediator between God and humankind (1 Tim. 2, 5) and claim that the saints can’t mediate.

This view is incorrect, because Christ is called our mediator because, as Son of God, he became human and reunited us with God his Father (Eph. 2, 14). He’s not a mere mortal  who prays for us, as the saints do. We became estranged from God because of sin. Through his death on the cross, Christ abolished the enmity of the human race towards God, that is sin, and renewed us, reconciling us to God. It was only through Jesus, who was both God and human, that we were given the opportunity to approach God the Father again. This is why Christ is called ‘the mediator’, because he’s ‘our peace, who has made the two groups one and has destroyed the barrier, the dividing wall of hostility’ (Eph. 2, 14) [‘For through him we both have access to the Father by one Spirit’ (ibid. 18], as Saint Paul tells us. So the mediation of Christ is different from that of the Mother of God and the saints.

As a result, ‘no-one who has recourse to you goes away disappointed, pure Virgin Mother of God; but they ask for grace and receive a gift for their profit from their request’, as we sing in both of the supplicatory canons.

Giving voice to these hymns of supplication and singing them with contrition, our gaze and hearts are fixed, in entreaty and appeal, on the form of our Lady who is broader than the heavens. She’s always depicted in the cupola of the sanctuary and never lowers her all-pure arms which are lifted in prayer. Instead she keeps them raised in an attitude of supplication to her Son, praying for us unceasingly. In this way she reminds us, her humble suppliants, in the most expressive manner, that she is our ‘fervent intercessor’ and ‘unchanging mediatrix’ as the hymnographer puts it.