The Strange Features of the Dormition

As every year, we celebrate the Dormition of the Mother of God with veneration and honor, though the festivities generate mixed feelings. On the one hand, there’s sorrow and pain because our Lady, who is ‘the hope of the hopeless and the strength of the helpless’ is no longer a physical presence among us, to comfort us in the vicissitudes of life and to protect us from disasters and temptations. On the other hand, however, we feel joy and relief because, with the dormition ‘she has not abandoned the world’ but continues, indeed with greater boldness, to pray for us from her heavenly abode. 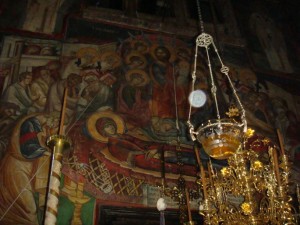 ‘What a strange wonder. The source of life is laid in a tomb and the grave becomes a ladder to heaven’ (stikhiro at Vespers). The hymnographer doesn’t dwell so much on the fact of the burial of the life-bearing body of our Lady, but gives greater emphasis to the transformation of the earthly grave into a ladder to heaven which leads to redemption from death. Indeed,  Gethsemane, where her grave is, is no longer a locus of sorrow, but a place of gladness: ‘Rejoice Gethsemane, the holy temple of the Mother of God’, while the faithful, led by the Archangel Gabriel, are called upon to raise their voices in the well-known hymn: ‘Rejoice, you who are full of grace. The Lord is with you’.

So we forget, for the moment, the sorrow-laden atmosphere of death and are transported to the joyous atmosphere of the Annunciation. The triple repetition of the phrase ‘Hail, you who are full of grace. The Lord is with you’ at the end of each of the stikhira at Vespers of the feast creates the feeling that, in the end, joy triumphs over sorrow. Indeed, the deeper we delve into the hymnography of the day, the more we realize that the sense of joy is predominant.

There are many strange features, then, in the feast of the Dormition: the Dormition refers back to the Annunciation and death engenders life. In fact, the Mother of God didn’t die, but ‘as the mother of life (Christ) she passed over into life’. Moreover, in her, the ‘bounds of nature were overcome’, since she was ‘a virgin after birth and alive after death’ (irmos, ode 9).

The ‘double miracle’- that she remained a virgin after giving birth to Christ and that she ‘passed over into life after death- is presented in other hymns, as well, such as the sessional hymn at Matins: ‘when you gave birth (to Christ) there was conception without seed; in your dormition there was dying without decay’. Better known, of course is the reference to this double miracle in the dismissal hymn for the feast: ‘In giving birth you preserved virginity, in your dormition, Mother of God, you did not abandon the world…’.

It appears that the hymnographer had no intention of dwelling on the transient sorrow of the Dormition but aimed to bring us to the permanent joy of eternal life, which the ‘death’ of our Lady heralds. This is why, at the Dormition, reference is made to the joyous events of the Annunciation of the Mother of God, the Incarnation, and Nativity of God the Word, and even to the ‘resurrectional’ death of the Lord. In the end, these ‘strange features’ all find an explanation.

If the Lord ‘underwent burial as a mortal’ then ‘how will our Lady refuse burial?’, remarks the poet at another point. Besides: ‘It is no wonder that the Maiden who saved the world should die, when he who made the world died in the flesh’ (Synaxari). And just as his body didn’t remain in the grave but rose, so, with her, the grave and dying did not triumph, but she ‘passed over into life’.

Indeed, as is pointed out in the exaposteilario and as is depicted in the icons of the feast, at her falling-asleep, ‘the source of life’ surrendered her soul to the Creator of life. It could not have been otherwise. He who took flesh and bones from her all-holy blood would not now have left her spotless body to undergo the alteration and decay of death. This is why he transported her from earth to heaven in his own hands, ‘gloriously and beyond telling’.

Let us, then, entreat our sweet mother, our Lady, whose death became ‘a passport to a better, everlasting life’, to pray for us to the Lord that he will give us, too, the passport to eternal life. But, at the same time, let’s not forget her own exhortation, which is her legacy to all people: ‘Do whatever he tells you to’ (Jn. 2, 5).

Having, then, become servants of the Lord, as did our Lady, let us follow his will faithfully so that ‘we may live godly, self-controlled and upright lives’ (Titus 2, 12). In essence, let us allow the ‘Mother of God who is sleepless in prayers and an unshakeable hope in protections’ to receive even greater boldness from her Son and God, so that she can pray for the salvation of the souls of all of us. Amen.