The Kontakio of the Indiction

Apart from the saints who are remembered on the day, on September 1 our Holy Church also celebrates the beginning of the Indiction, that is the start of the new ecclesiastical year. Among the hymns for the feast is the following, the kontakio for the Indiction, which reads as follows:  ‘Maker and Master of the ages, God of all, who are indeed transcendent, bless the course of this year and, in your boundless mercy, save all those who worship you, our one and only Lord, and who cry out to you in fear: Lord and Savior, grant a fruitful year to all’. 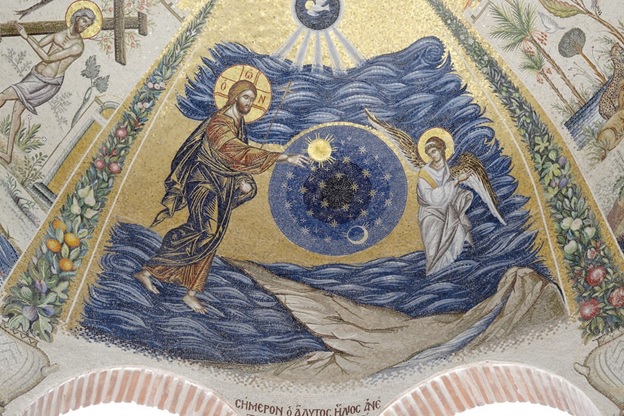 The creation of time can be traced to the first chapter of the book of Genesis and, by extension, to the whole of Holy Scripture (Old and New Testaments) where the creation of the world is mentioned. According to Gen. 1, 1, ‘In the beginning, God made heaven and earth’. This verse reveals that the universe and time were created simultaneously and were brought from non-existence into existence by the all-wise, all-powerful and timeless Triune God.

This brief phrase sets out in a striking manner the fundamental triptych of the Biblical view of the cosmos: temporality (‘in the beginning’), creativity (‘made’) and personality (‘God’).

Wishing to show that time is created and is subject to the will of God, the hymnographer who wrote the service of Vespers of the Indiction, that is the first of the ecclesiastical year, expressed it in this way: ‘Creator of the universe, setting times and seasons by Your sole authority…’ (Dismissal Hymn of the Indiction).

Like the cosmos, time also has a beginning and an end. It has an end because it had a beginning, and it had a beginning because it was also a creation of sole Creator ‘in time’. Just as the beginning of time coincided with the beginning of the cosmos, so the end of time will coincide with the end of the cosmos. On this subject, it is worthy of note that the book of the Revelation of Saint John makes mention of a new heaven and cosmos, when the old ones have passed away, an observation which demonstrates the transitory nature of this cosmos and time: ‘Then I saw a new heaven and a new earth, for the first heaven and the first earth had passed away’ (Rev. 21, 1).

In his homily on the Hexaemeron (the Six Days of Creation), Saint Basil the Great assures us that whatever has a beginning, time being no exception, will also have an end, because it’s certain that whatever’s created ‘in time’ will also come to an end ‘in time’. The end of time is the consequence of the beginning of time. This ending of the cosmos and of time is confirmed both in the Gospel according to Saint Mark: ‘heaven and earth shall pass away, but my words will not pass away’ (13, 31), as well as in the book of Psalms: ‘the heavens are the works of your hands. They will perish but you remain’ (101, 26-27).