A chat with Papa-Theoliptos. Love has a face

‘Well done that I don’t love?’

‘You’ll understand as we go on. Just tell me what you mean when you say you don’t love’.

‘I mean, I feel like my heart’s a stone. I don’t care about other people. I’m not interested in my neighbor. There are times when the problem of somebody else is something to be happy about, because it’s not a problem I have. I condemn. And sometimes, if another person’s happy, I get eaten up by envy’.

‘Definitely twice. First, because you’re thinking with contrition. Don’t you realize that, with what you’re saying, you’re basically confessing? I may not be wearing a stole, but the road to your repentance is now open to you. You’ve got to the point where you recognize the limitations of human powers’. 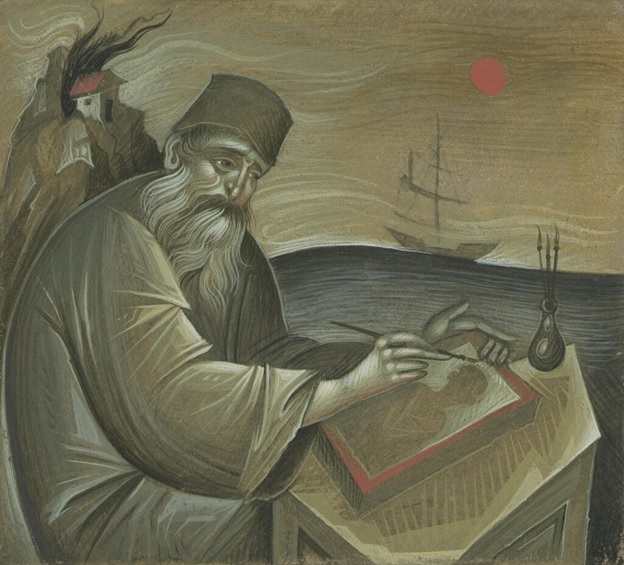 ‘The second “Well done” is  because you’ve understood that love isn’t some achievement of ours; it’s a gift. Its absence is heart-breaking. Longing for it is unbearable. Don’t you realize that you’re missing something that your being recognizes, but that you aren’t able to taste? Where did you learn to look for love? Who taught you and now you want it so much? Don’t you see we were made to love but we don’t enjoy love? You’re heart-broken and you understand. This is why I said “Well done” twice’.

‘First of all, be patient. Love goes at its own pace and on its own schedule’.

‘Niko, love’s a person; or rather it’s a way of being for a person. It’s not an emotion, it’s not getting your hormones in balance. It’s not an instinct. It’s a person. Like you, it’ll decide if and when you’re to meet’.

‘Until then, works of love. As many as you can. From the most insignificant to the very important’.

‘But we’ve just said that I don’t have any love’.

‘You don’t need it. I was telling you about works of love. And you know very well what they are’.

‘Listen to me. The Fathers of the Church know what fragile and changeable creatures we are. They also know that we’re body and soul. Both of them share our journey towards glorification. The body contributes through the practical application of the virtues. Through the spiritual life the soul’s illumined and its eye, that is the nous, is in a position to gaze upon the lights of eternity. Of course, everything starts with the inner life and as people make progress in that, so their external life, that is their actions, reveals this progress. But there’s also the opposite process. Works  of love- almsgiving, sharing whatever burden’s weighing your neighbor down, as well as bodily worship, prostrations, reading the scriptures and saying prayers- are the body’s contribution, so that the soul can make a new start.

‘But everything will be just a formality, empty, like applying rules of good behavior’.

‘It seems like that, but it isn’t. Works, especially what you call the empty ones, aren’t enough. We don’t perform a list of good deeds so that God will love us. When they’re done in the spirit you’ve displayed today by what you’ve said, works are the preparation for an encounter, which is certainly going to happen. We don’t know how and when but it’ll happen. As in the case of the Prophet Elijah, God comes considerately and gently, almost imperceptibly, like a breath of wind. And we have to be ready, receptive and aware. Works of love prepare us to meet the face of love. When that happens the works will become natural, spontaneous, and self-evident. But before this encounter, our self needs pressure, discipline, a wake-up call and self-criticism. Not guilt, though. From what you’ve been telling me today, that’s the only danger. You might think you’ve failed and then condemn yourself over it. And yet, my brother, neither you nor me nor anyone else can do more than recognize how flawed we are’.

‘Aren’t you worried, father, that all this praise today will go to my head?’.

‘Not for today, at least. You’re safe behind the shield of self-reproach. Next time, we’ll see’.