From the moment when our first ancestors ‘inclined their ears’, paid attention, to the proposition of the devil that they set aside God’s commandment and eat the fruit which wasn’t blessed for their consumption, they suffered death. Their decision to eat that fruit resulted in the severance of their relationship with God and the acceptance of death. Just as the separation of the soul from the body means the death of the body, so the separation of the soul from God is the death of the soul. For the soul, life was its relationship with God. In order for this relationship to exist, God wanted us to share in his own life, which is why he endowed us with his ‘life-giving breath’. So that we could co-exist and live with him ‘in prayer and divine contemplation’, in humility and obedience, which would bear fruit in our deification ‘by grace’ and allow us to look upon his divine glory. In loving God, we’d have participated in his life, which is love.

For the soul, death ‘is estrangement from God’ (Gregory of Nyssa). Abandonment of God was tantamount to the abandonment of life and submission to death. Adam felt that he was in a position to provide for himself in life and achieve his goal of deification without God, but this was his sin, because ‘apart from God’ there is no true, imperishable and immortal life. But he renounced God, became estranged from him and became restricted to a perishable and mortal existence, which would secure material goods for him. This estrangement from God was, in fact a real divorce, a separation from the source of life which brought about the ‘utter devastation of the soul’ (Gregory the Theologian). 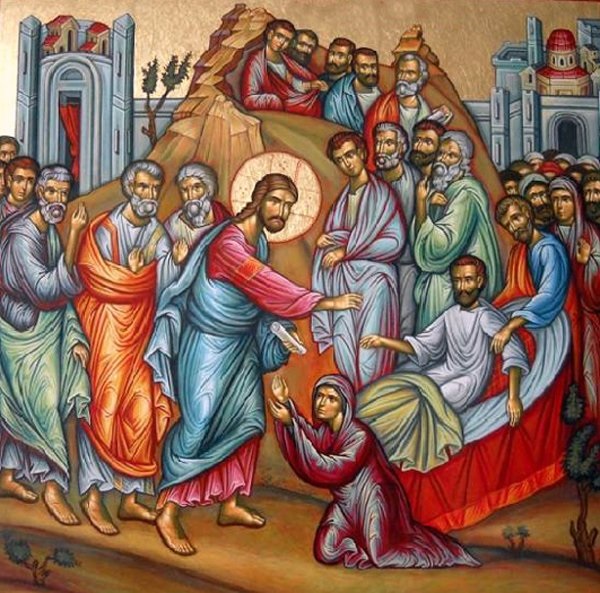 When the soul became separated from God, it was enslaved to its various passions which, when they’re activated, constitute the sins, which are death. ‘When desire has conceived, it gives birth to sin; and when sin has been accomplished, it delivers death’ (James 1, 15). The pernicious desire begets sin, from which is born death of the soul and, consequently, of the body. When we’re estranged from God, we fall under the sway of the devil, the inventor and proponent of sin. Although we were made by God to have authority over creatures, passions and demons, through transgression we became slaves to the passions, demons, and death. In this way, sin and the devil reigned in the world. This was his ambition when he convinced Adam to remain ‘apart from God’. He wanted to ‘divert our minds from the remembrance of God and used earthly bait to turn us away from what is really good and beautiful towards that which is only apparently so’ (Saint Makarios).

Death, therefore, wasn’t part of our nature at the creation, but is the result of our apostasy, the ‘wages’ of sin which are paid to all those who commit it. ‘There is no begetter of death other than sin’ (Gregory of Nyssa). In other words, the devil has put us to death through the passions, which we agreed to allow to have free rein within us, and through the sins we’ve committed. In this way, we’ve made him lord of the world of sin, into which we’ve entered. Sin is the sting of death, according to Saint Paul. This means that, if there were no sin, if it were mortified within us, death couldn’t harm us. But since sin does exist and we give it real expression, it brings death, first to the soul and then to the body. The fear it causes is the awareness of our guilt over what we’ve committed. This is why those who freely suffer not only have no fear of death but ‘desire to depart and be with Christ’ (Philip. 1, 23).

More painful than bodily death is that of the soul, that is, the absence of God from our life. The death of the body is an image of the death of the soul from the dead works of sin, ‘the passions of the flesh’. ‘Real death is hidden in the heart within us and we become deadened on the inside’. God allows us to have a sense, at least of bodily death, because the harsh experience of the pain it causes us can be a motivation for repentance and return to God. When we mourn the loss of physical life, it’s possible for us to ‘come to our senses’ and begin to seek the life ‘in God’, ‘which we have lost’, the ‘heavenly Mother’, the ‘Grace of the Holy Spirit’ and to return to it. Death will have dominion over the world of sin and the passions until it is destroyed utterly and trampled upon by the death of him ‘who does not know sin’ (Gregory of Nyssa).

Christ ‘went to the town of Nain’ in order to overcome death. And he did so because he had the authority to do so. He brought resurrection and life to the son of the widow, but the course of his life continued. It was a path of pain, suffering  and the cross, until he freed all of us from death, caused by sin, and made us sharers in the resurrection. Death is ‘the spirit of the world’, ‘the mentality of the flesh’, which are governed by the prince of the world, of this age, by life ‘without God’. Christ wants to bring this life back into communion with him, to transform it into life ‘with God’, once he’s cleansed it from the sinful passions and the mortal deeds of sin. The life-long path he’s left us to follow is: the will of God is our ‘sustenance’, even if it leads to the cross.

Sin often warred against him (hatred, dishonor, mockery, curses, blows, spitting, the terrible sufferings in general and death on the cross). He accepted with pain everything this entailed, but never accepted sin. By pitting the will of his Father, love, and humility against the variety of sins from the instruments of the devil, he ‘condemned sin in his own body’. He abolished every form of sin, as well as the death that accompanies it, through his perfect sinlessness (Is. 53, 9). He not only refrained from repaying those responsible for his terrible sufferings, he even forgave them. In this way he demonstrated that, in truth, ‘God is love’.

‘There is no begetter of death other than sin’. Even though he underwent death on the cross, he became the victor over death. As the fruit of his actions he bore the Resurrection and bestowed eternal life upon us. Given that the Lord was free of all passion, of all sin, he didn’t fear death, even death on the cross; that is, in its worst form. Naturally, as a human person ‘he began to be sorrowful and deeply distressed’. He was sorrowful, however, ‘by concession’, in order to show that he was truly human.

As we mentioned above, if the passions live within us (egotism, selfishness, sensuality, avarice, ambition, hatred, judgement and so on) then death dwells within us, accompanied by fear and pain. This fear of death was generated in Adam by the absence of God, who is the true and only life. If the passions are mortified, so, too, is death.  The passions are mortified by the soul through spiritual austerity and God’s help. This is why all those ‘living in asceticism’ share in the Lord’s Supper, ‘for the mortification of the passions’. It’s the secret which vanquishes death. The inception of the mortification of death is Christ’s own death by the instruments of the devil, which he accepted willingly, but which, thanks to his love for his Father, he transformed into resurrection and life. 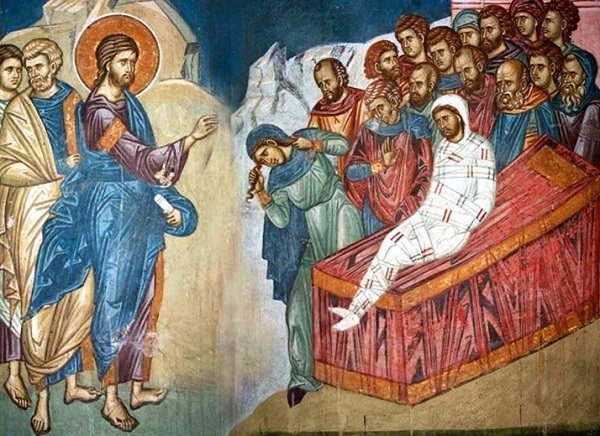 The Saints: victors over death

Death will be completely abolished at the Second Coming when everyone will rise. Saint Paul says that ‘The last enemy to be destroyed is death’ (1 Cor. 15, 26). Death’s dominion will be abolished since all the dead, whom it now holds and rules, will be raised and Christ will reign over them,.  But is it possible for people to rise above the passions and also to rise above death?  The saints say yes, because, with their efforts and by God’s grace, they became ‘lords of the demons and passions’ (St. Makarios). Lords of the passions means that they also have authority over death, as perfect humans and gods ‘by grace’. Through their experience, the saints send the message that death has been vanquished, ‘put to death’, because they were cleansed of their passions yet continued to live in the world, in accordance with the divine commandments. Their life was their relationship of love and communion with God. Things perishable, which are of such concern to us, were subjected by them to things permanent and eternal. Those of them who became martyrs boldly underwent terrible sufferings for Christ, with joy and exultation. They rose above death because they lived ‘in Christ’. They lived the resurrection before the general resurrection. In the same way, death was defeated by those who, through their ascetic efforts, acquired the Grace of the Holy Spirit. They put to death their former self and ‘presented themselves before God as living, from the dead’.

Therefore, when Christ tells the mother of the young man in Nain not to weep, it applies to each of us, if we mortify the passions for the love of Christ and his kingdom. Then the death of the body is an offering of thanks to God, because of the resurrection of the soul. We can mortify death within us, which is caused by the passions, and then ‘we pass from death to life’ (Jn. 3, 14).

From his own experience, Saint Makarios assures us that this is a struggle which is continuously being fought within us, where the soul touches Christ and communes with him, in order to bear fruits of the Holy Spirit and increase our spiritual maturity. Our daily task is to work at Christ’s holy commandments, in which he himself, in mystical fashion, is to be found. Christ’s own power works with us in this, granting us the resurrection, which is our consolation and joy for our physical death.