Beloved brothers and sisters, when he was speaking one time to the elders of the Church of Ephesus, Saint Paul told them that he was aware that, after he left them, savage wolves would come in among them and would not spare the flock. Even from their own number, men would arise and distort the truth in order to draw away disciples after them (Acts 20, 29-30).

This has been true in all the centuries of the history and life of the Church, because various heretical thinkers have appeared who have arrived at anti-Orthodox teachings and have created problems for the Church of Christ.

The devil is always fighting against the Church; he hates the person of Christ and wants to alter the Lord’s teaching. It’s from this point of view that we should view heresies.

While it’s true that heretics used philosophy and speculation for theological issues, the problem is that they didn’t have the pure heart through which God acts, as Christ says in the Beatitudes: ‘Blessed are the pure in heart, for they shall see God’ (Matth. 5, 8). This means that the demons operate in unclean hearts and so, in the end, heresy is demonic action. 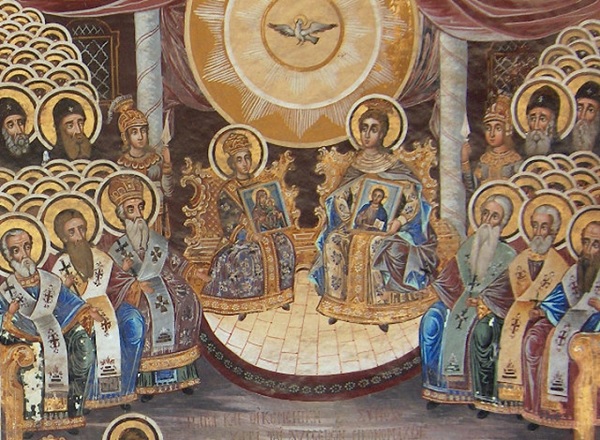 In the 8th century, another heresy appeared, known as iconoclasm, which was against the painting of holy icons. Christians paint icons of Christ, the Mother of God, and the saints and they kiss them, asking for grace from Christ. But the Nestorians, the Paulicians and the Monophysites rejected veneration of the holy icons, because they had a problem with the human nature of Christ, each for their own reasons.

And so, in 726 and 730, Emperor Leo III issued two proclamations against the holy icons and forbade their veneration. This was repeated later by Emperor Konstantinos V [Leo’s son]. The Orthodox Fathers fought against these decisions because they knew, from their experience, about the great power of Christ, the Mother of God and the saints depicted and the value of their icons.

In 787, the 7th Ecumenical Synod convened in Constantinople, on the initiative of Empress Irene the Athenian and her son, Konstantinos. It was presided over by Tarasios, Patriarch of Constantinople. This Synod invalidated the iconoclast Synod which had taken place in 754, in the reign of Konstantinos V, anathematized the heretical iconoclasts and enshrined the Orthodox teaching concerning the holy icons.

This Ecumenical Synod based its position on the teachings of Saint Basil the Great, Patriarch Germanos of Constantinople and, in particular, on Saint John the Damascan. According to Orthodox teaching, there is a difference between true worship (which is to be rendered only to God, the divine nature, and not to icons and the saints), and the reverential veneration paid to the holy icons. Moreover, this veneration is directed to the person depicted. This means that when we kiss the holy icons, we don’t venerate the matter from which they’re made, but the hypostasis of the person represented.

The Orthodox icon teaches the mystery of the incarnation of the Son and Word of God, and refusal to venerate the icon of Christ is tantamount to denying his incarnation. Moreover, the saints are depicted and honored because they’re members of the body of Christ and have the grace of God within them. The icons function as bearers of divine grace in the way that Christ’s human nature served to put into action that which was his divine nature. This is how they work miracles. This, briefly is the theology of the holy icons, which is, in reality, the theology of the incarnation of Christ, as confessed by the Ecumenical Synods and the saints as members of his glorious body.

Also important in this Synod is that mention is made of the fact that Christ is the betrothed of the holy Church, that he’s with his disciples throughout the ages and has granted them the light to recognize him, to redeem them from the darkness of idolatrous madness. And yet, drawn away by the deceitful enemy, the heretics abandoned this gift and the tradition of the Church.

This and much else shows the difference between the holy Fathers and the heretics. This is why, at this Synod all the heretics were anathematized by name, from Arius up to those of the time, while, at the same time, the Orthodox teaching regarding the reverential veneration of the icons was proclaimed. 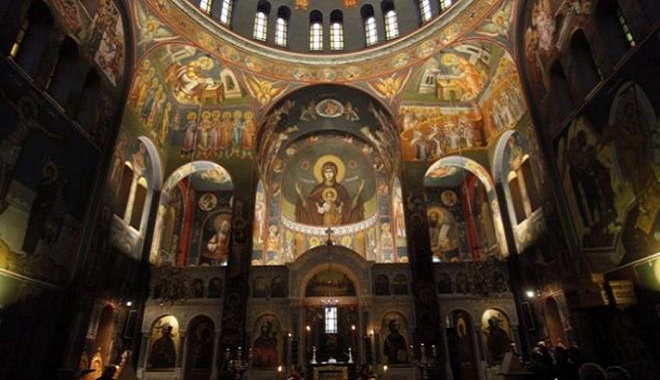 At one point in the Proceedings it says: ‘And we also embrace the voices of the Lord, the apostles and the prophets, through which we have been taught to honor and magnify’. This sentence shows the great difference between the empirical theologians, the Fathers, and the philosophizing theologians, who, because their had impure hearts, were activated by the evil spirits.

Empirical theologians, such as were the Prophets, the Apostles and the Fathers, know from their experience that, when someone attains the vision of the glory of God in the hypostasis of the  Word, they’re seeing the divine light, beyond cognition and beyond sensation. There’s no room for speculation, imagination or delusion. After the revelatory experience, they’re in a position to depict Christ, Our Lady and the saints in icons, but they know full well that uncreated words, that is the revelatory experience is one thing and created depictions are another. The latter may allude to this uncreated glory, but can’t express it adequately.

Empirical theologians also know that those who kiss and venerate the holy icons receive grace from God, in accordance with their spiritual state, and, in this way a flame, a desire is kindled within them to see the uncreated glory of God.

It is from this perspective that we kiss the Precious Cross, the holy icons of Christ, Our Lady and the saints, holy relics, and blessed holy objects. We glorify Christ who became a human person, deified human nature and made us members of the Church, members of his glorious body.