Encomium on the Conception of John the Baptist (part 3)

And so John was begotten in the womb of his holy mother, who was endowed with the gift of prophecy, by a priest and prophet father who was adorned with a thousand and one shining virtues and especially with his love for God. John was the only person ever to be enabled to prophecy when he was as yet in his mother’s womb. He was allowed to recognize the Lord Christ, who was in the Virgin’s womb, and thus became the only human being ever to have borne the Holy Spirit when still in the womb. He gave us the marvellous reality of an infant that gestated another while being gestated himself. He was gestating in the womb of his mother, and himself gestated the grace of the Holy Spirit. 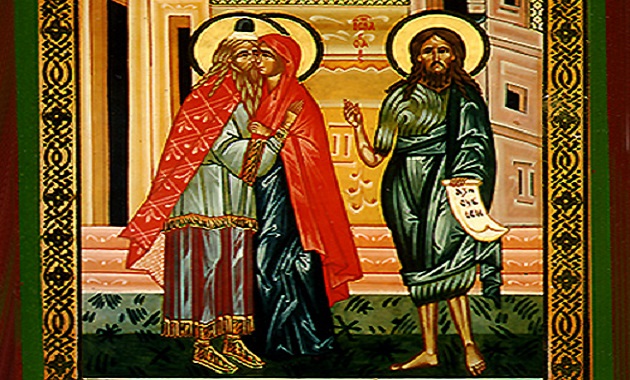 He gestated the prophecy and, before he was brought to  term and born, he gave birth to the Grace of the Holy Spirit. Because, as God’s prophet Isaiah says (Is. 26, 17-8), prophets receive the prophetic message and bear it within themselves with pain. Then, when the time comes for them to serve the Holy Spirit, they reveal to people the message they’ve been keeping as a secret, just as if they were bringing a child into the world. But John followed this established prophetic procedure immediately after his wondrous conception. As we’ve said, he was conceived in the barren womb of his elderly mother, where his elderly father had left his seed. From then on, he naturally rested until the moment the Virgin met his mother, since his mother’s care and affection demanded this.

But he had no desire for the Grace of the Holy Spirit, which he had inside himself, to remain inert (because as the angel testified, he was full of the Holy Spirit) even when he was still in his mother’s womb. And so, when five months of his gestation had passed, his mother continued to hide herself from the eyes of other people and refused to reveal that she was about to become a mother. These five months correspond to the five senses that people have and which Elizabeth wanted to avoid. She wished to hide both herself and the prophet she was carrying within her, no matter how much he wanted to reveal himself.

So the sixth month came, and the Virgin arrived, bearing in her womb the Creator of the whole of Creation. Because, in the sixth month of Elizabeth’s pregnancy, Mary conceived Him Who created the whole world in six days and, in particular, human beings on the sixth day. Him Who regenerated humankind with His cross when they had become depraved through their sins. Then John was unable to keep quiet. He, who was the voice of the Word, could not consent to be silent in the presence of that Word. And so, before his time, he became a herald of the advent of Christ, because nothing could prevent him from doing so, not even the fact that, as an embryonic infant, he still didn’t have the use of his voice.

And so he rejoiced and was glad, through the Grace of the Holy Spirit, and declared that He had arrived, Who would wipe away every tear from our faces and would grant peace and joy to all the world. He figuratively stretched out his finger and indicated the Lamb of God, Who would be sacrificed for us, the wild goats, for the sins of all of us and would bear on His shoulders the guilt for all the sins of the world. He spread out both of his hands and, in this way proclaimed, before his time, the banner of the Cross. The standard which He, Who was then in the womb of the Virgin, came to raise against the demons. John stood upright in the womb of his mother and, with this stance, mystically sang of the raising of all from the depths of hell.

This raising was granted to us by Him Who was hidden in the grave and was at that time, hidden in the uninseminated womb of His mother. It’s as if John was at odds with his mother: he wanted to proclaim all this, whereas she wanted to keep him within the physical restrictions of the womb, against his will, a captive, unless he would agree to her lending him her voice so that she herself could declare what she did to the Blessed and Holy Virgin: “Blessed is the fruit of your womb. And what have I done that the mother of my Lord should come to me”. This is John himself speaking, even if the words actually came from the mouth of Elizabeth.

This voice is one and the same as the voice with which he addressed Christ when He came to be baptized in the Jordan, where John was baptizing people. When he saw Him coming, he said: “I need to be baptized by you and you come to me?”. You see the correspondence in the manner of speaking? It was he who was speaking then and is speaking now. Then he was speaking with his own voice; now he’s speaking with that of his mother.