The prophet Elijah occupies a special place among the ranks of the prophets of the Old Testament, and his name is often mentioned in the New, both by the Lord or by various holy persons The word ‘prophet’ denotes someone who has the gift of prophecy, a teacher, a special organ for revelations of God.

The phenomenon of prophecy first appeared among the Jews with people known as ‘ecstatic’ prophets. They toured towns and villages, going into a state of ecstasy with the aid of music and dance. In this condition, they would receive divine messages, which they would then transmit to the people. At the time of the kings, people appeared who were enlightened by God, such as Elijah and Nathan, who were distinguished for their efforts to preserve the purity of Israelite religion. 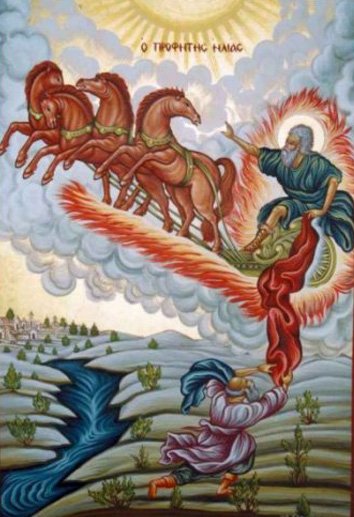 Elijah was an Israelite prophet of God, the son of Savah, and hailed from the village of Tishbe in the region of Gilead, to the west of the River Jordan. Hence his name ‘the Tishbite’. He lived 816 years before the coming of Christ on earth. He was someone who had complete faith in God, a person of prayer as Saint James mentions in his epistle (5, 17-18). He was active, courageous and had burning zeal for the true God: ‘I have been very zealous for the Lord God Almighty’ (III Reigns [I Kings] 19, 10). He left no written work except for a letter he sent to Jehoram. Despite this, he’s always mentioned with words of praise and is projected as an example to follow. He exercised his prophetic gift for 25 years.

It’s worth noting that God intervened when Elijah was born. His father had a divine vision. Two men dressed in white called the child Elijah, wrapped him in swaddling clothes and gave him a flame to eat. The father lost no time in going to Jerusalem to priests and, when he had related his vision, was told that his son would become a prophet and would judge Israel with a two-edged sword and fire.

Elijah appeared at a very difficult time for Israel, which had Ahab as king. His presence was powerful, as he performed miraculous signs in the kingdom. Without hesitation, with boldness and courage, as an envoy from God, he went to Ahab, and forecast the three-year drought that would afflict his kingdom. At God’s command, Elijah departed and went to hide in the Kerith Ravine where ravens brought him bread and meat, morning and evening.

God allowed the person of Elijah to perform miraculous events because of the zealous and unshakeable faith he had. This faith permitted him to call down fire from heaven three times, causing the Israelites to say: ‘The Lord indeed is God; the Lord indeed is God’. He also stopped the rain for three consecutive years and raised the dead, such as the son of the widow at Zarephath. He burned the 100 soldiers sent by King Ahaziah to arrest him. Another miraculous event was when the widow had no bread and Elijah told her that God had said that her jar of flour and vessel of oil would not run out until the day the Lord sent rain. The widow heeded what he said and, indeed, neither the flour nor the oil ran out for quite a time. The last miracle the ‘angel in the flesh’ performed was to part the waters of the River Jordan.

Three of his prophecies which were fulfilled were the three-year drought, the condemnation of Ahab and the death of Ahaziah.

Elijah lived and acted in accordance with the will of God and so God took him up into heaven in a whirlwind. As he ascended into the heavens in a chariot of fire drawn by fiery horses, he allowed his cloak to fall and it was collected by Elisha. Elisha was anointed as his successor by Elijah on the instruction of God Himself : ‘you shall anoint Elisha son of Shaphat as prophet in your place’. This succession is unique in the whole of the Old Testament. God did not allow Prophet Elijah to taste death, but instead received him directly into the heavens. When he had come to the end of his mission, Elijah told Elisha that he would fulfil his desire, which was that he, Elisha, would receive the blessing and grace of Elijah, once Elijah had ascended into the heavens. Elisha didn’t want to be separated from Elijah at any price and wanted to accompany him even into the heavens. But then he saw a vision of a chariot of fire drawn by fiery horses taking Elijah up into the heavens.

Dismissal Hymn:
The incarnate Angel, the Cornerstone of the Prophets, the second Forerunner of the Coming of Christ, glorious Elijah, who from above, sent down to Elisha the grace to dispel sickness and cleanse lepers, abounds therefore in healing for those who honor him.