Saint Symeon, Archbishop of Thessaloniki, was one of the most significant figures in the Orthodox Church during the Late Byzantine period and a landmark for Divine Worship. We have very little information concerning the life of the Saint. His birth is dated to the second half of the 14th century and he came from Constantinople. Symeon is no doubt his monastic name, but his secular name is not known. Before being elevated to the office of bishop he lived as a hieromonk in a monastery in the city of his birth. He was closely linked to the Xanthopoulos brothers and the monastic community they had founded in the Reigning City. It is likely that Symeon belonged to it.

His education was basically that of theology and the Church. From his works he does not appear to have been an adept of philosophical discourse and of secular education in general. He did, however, have an excellent knowledge of theological writings and, in particular, anything connected with the worship of the Church. The times in which he lived were difficult both for the Orthodox Church and well as for the long-failing Byzantine Empire. It was a period when the acrimony between the Orthodox Church and that of Rome was at its height.

Between the years 1410 and 1418 he was elected Archbishop of the joint-capital, Thessaloniki. His consecration took place in Constantinople, in accordance with the established practice for hierarchs who belonged to the Patriarchate of Constantinople. He then moved to his province to be enthroned. This enthronement took place after quite a lengthy interval, because of a combination of unfortunate circumstances. His feelings of inadequacy in the face of the task the Church had charged him with are evident. Humility was a characteristic feature of his, as can be seen from the phraseology of his signatures from the time of his term in office.

His time as Archbishop of Thessaloniki also marked the end of Byzantine control of the city. On the one hand, half-way through his time as shepherd, the city was captured by the Venetians (1423); and, on the other, six months after his departure from this life (†September 1429), the long period under the Ottoman yoke began (29/3/1430-26/10/1912).

As Archbishop of Thessaloniki, he was distinguished for his close contacts with the Church of Constantinople. His activities in Macedonia were of the greatest importance, and can by described in three particular terms. In the first place, his teaching, through the spoken and written word. Apart from his verbal teaching of the Orthodox Faith, he also left a host of pastoral letters, many of which were to people living beyond the boundaries of his province, such as, for example, in Crete. Second, his care for the poor and distressed. At a time characterized by decline and uncertainty, the charitable work of the Saint was very significant. Third his concern for a renaissance of liturgical life and proper order within his archdiocese. His liturgical interests are obvious from his works, most of which have to do with Church services. 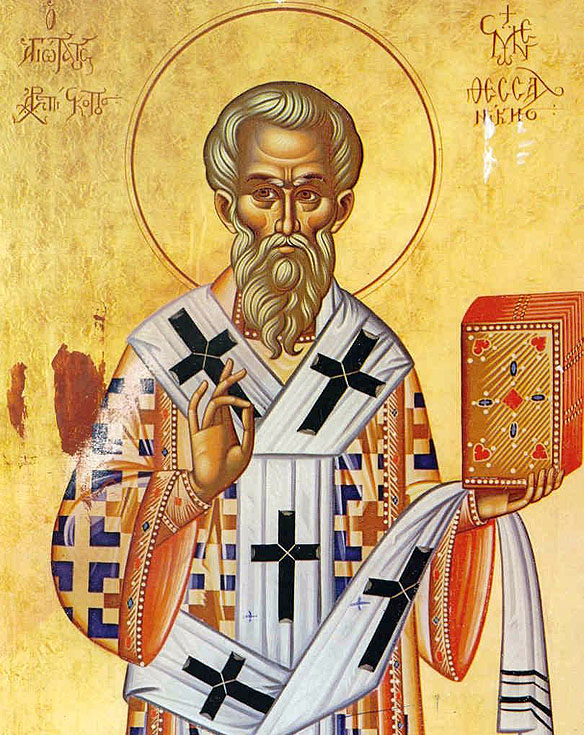 We can divide his reign as archbishop of Thessaloniki into two periods. The first (1416/7-1423, i.e. the time between his enthronement and the Venetian conquest of the city) was a peaceful time, within the Byzantine State. The second period (1423-1429) was when the Venetians held sway in the city and were still there when he died. Regarding the foreign occupation of the city, the Saint seems to have preferred Venetian overlordship to enslavement to the Turks. He thought that living under the Turks was incompatible with the Orthodox Christian faith, since the Ottomans proclaimed a different teaching about God. Naturally, this does at all not mean that he wanted Venetian domination; in fact he continued to express his reservations openly. The fall of Thessaloniki into foreign hands has unfortunately been attributed to his rigid stance, but this is exaggerated and unfounded. The Saint was unflinching in his Orthodox teaching and firmly adhered to the values of the Byzantine Empire.

Saint Symeon fell asleep in the Lord suddenly, in the middle of September 1429. It is strange that there was a long delay before he was officially declared a saint by the Great Church of Christ. This occurred only on 14 April 1981, and his memory is celebrated every year on 15 September.

The universal recognition of his works was so widespread that there are references to them from quite early on as having been written by a saintly man, irrespective of lack of any official declaration of his sanctity. The saint grew up as a member of the theological circles of Constantinople and this, together with his activities in Thessaloniki, the see of Saint Gregory Palamas, the leader of the hesychast movement, inform all his writings. Saint Symeon was a faithful admirer of the Patristic tradition and teaching, though he never engaged in uncritical reproduction of it. He records the preceding Patristic teaching in his works, but through the prism of the liturgical practice of the Orthodox Church. He was also imbued with a spirit of freedom  as regards typological interpretation, since he did not restrict himself narrowly to the received hermeneutic models of the Holy Fathers.

If we examine the written output of the saint from the point of view of content, we can see that it is an overview of the dogmas and ritual practices of the Church. His works do not reveal a man with a multi-faceted knowledge of secular wisdom. His handling of language, however, together with the high level of his theological discourse, demonstrate the unique quality of his work. All of these together reveal a complex and creative personality, extremely humble but also vexed by the concerns of his flock. Orthodox dogmatic teaching and the Church’s liturgical tradition are the two main pillars on which his literary legacy rests. The two poles are involved in his wide-ranging liturgical work which formed the bulk of his studies.

The predominant aim of his liturgical written production was the correct conduct of the divine services by the celebrants and the proper participation of the laity in them. His most fundamental works are annotations to the divine services. In these efforts, he eschewed fuller liturgical comments. From his works it is possible to see him as an annotator of divine services, the author of a rule, a writer of prayers and, finally a hymnographer. His contribution to the field of Liturgics has established him as the outstanding representative of Byzantine liturgical hermeneutics, while his life as a whole makes him a worthy emissary and defender of all of us before the Lord.