Saint Athnasios came from a village near Thessaloniki called Koulakia, now known as Halastra). Born in 1749, his parents, Polykhrous and Louloudo, were prominent members of society in the area and were distinguished for their piety. So from an early age he was brought up in a devout, Christian environment. After he’d made a start with his education in his village, he continued in the Greek School in Thessaloniki, where the hieromonk Athanasios Parios was a teacher. To complete his studies, he went to the Holy Mountain, to the school of Vatopedi [the Athoniada], where Panayiotis Palamas taught. Here he was an outstanding pupil. After this he was also taught Eugenios’ Logic with a teacher who had been sent to Athos by the Great Church of Christ [the Ecumenical Patriarchate], Nikolaos Tzartzoulios, from Metsovo. 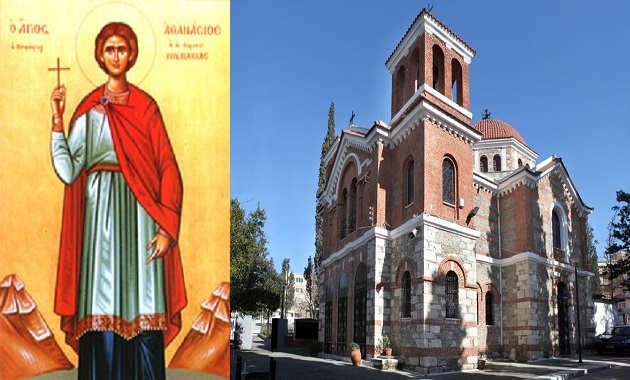 When his teacher left the Athoniada, Athanasios followed him to Constantinople. After almost two years, however, he returned to the Holy Mountain and also paid a visit to Koulakia, his home village. Here there was a religious meeting place (Vasilikos Melcihanas) where he often went, when he was in the village, in order to talk and pick up news.

It happened that an emir was there one day with Athanasios. During the course of conversation, Athanasios, who knew both Turkish and Arabic, said in all innocence: “Your faith can be summed up in these words” and repeated the words which summarized the Muslim faith. But as soon as the emir heard what was no more than a quotation of the particular words, he considered it a consummate confession of faith and said to Athanasios: “You’ve said salâvat (confession of the faith) so now you’re a Muslim”. Athanasios tried in vain to convince him that the mere quotation of words included in the Ottoman faith did not mean that he had embraced that faith.

The Turkish official wasn’t convinced, however, and handed him over to the Ottoman overseer of the Melcihanas, asking him to keep watch over Athanasios until he, the emir, returned. He left at once for Thessaloniki and presented himself to the mullah, to whom he shamelessly slandered Athanasios, saying that he had said salâvat and confessed their faith, but that then had recanted and mocked it. So the mullah had Athanasios brought before him and again heard the charges brought against him. He then asked questions of the defendant, who explained the whole truth of the matter to him. The judge heard him out and found in his favour, accepting that it wasn’t enough for someone to merely know the principles of the Muslim faith to make them a member of it. And turning to the emir, he said: “If you knew the words of the Christian creed and told him that they were the foundation of his faith, you wouldn’t become one simply by quoting the words”.

But the agas who were also there disagreed strongly and claimed that their faith couldn’t be mocked. So the judge changed his mind and began to urge Athanasios to convert to Islam, using flattery and threats, telling him that when he’d made the supposed confession, he’d been moved to do so by God. So he really ought to be true to his salâvat, because the Muslim faith wasn’t to be scorned. Athanasios was true to his faith, however, and immune to both the blandishments and the threats of the emir. The latter then ordered that he be imprisoned.

Some days later, the mullah had him brought before him again, to examine him. But when he saw that Athanasios was firm and unmoved, he pronounced a guilty verdict against him. So the executioners took him away and hanged him outside the town (at the spot where there is now a chapel bearing his name, in the cemetery of Saint Paraskevi). In this way, Saint Athanasios was martyred on 8 September, 1774, at the age of just 25.

[From the official website of Holy Metropolis of Neapolis & Stavroupolis, Thessaloniki, Greece, where place of martyrdom belongs]