Blessed Gerasimos the Younger, from Kefallonia

Our blessed father Yerasimos was born in 1509, in the village of Trikala, near Corinth in the Peloponnese. His God-fearing parents, Dimitrios and Kali came from the prominent Notaras family and, from a young age, he was taught his letters, at which he excelled. While still a young man, he left his birthplace and went to Zakynthos and from there travelled throughout the whole of Greece. From Thessaly he went to the Black Sea, Constantinople, Propontis, and Halkidon (Chalcedon). Wherever he went, he tried to find people who had reached the perfection of the virtues by leading an ascetic and angelic life and who would teach him the art of arts and the science of sciences. 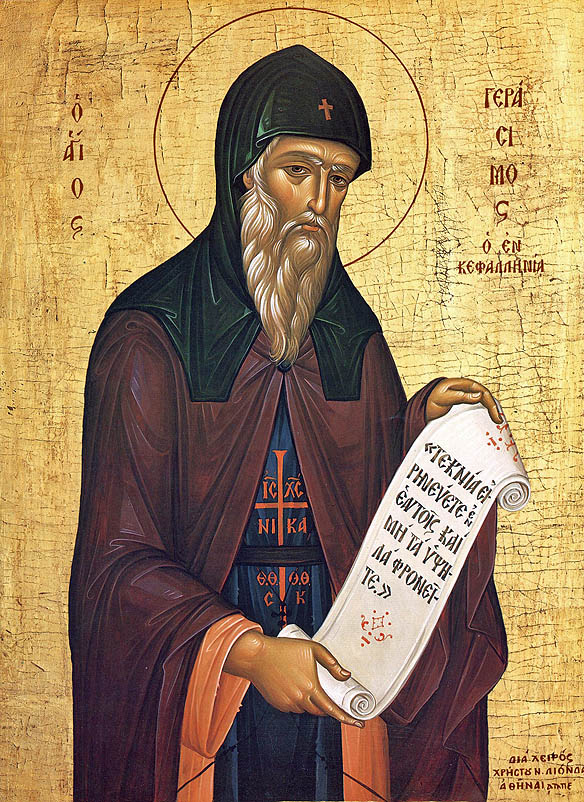 He finally arrived on the Holy Mountain, where, like a diligent bee, he sucked the nectar from the various flowers of virtue he observed in the ascetics in order to create within himself the honey of purity of heart. Blessed Yerasimos stayed a good while on Athos, learning from the servants of Our Lady the Mother of God. He took the great, angelic habit and, with great zeal, applied all the virtues of the monastic life: continuous fasting, all-night vigils, tears, elevation of the mind to God in utter stillness and purity of heart. Some years later, he left the Holy Mountain and began a pilgrimage to the Holy Land. In Jerusalem, Patriarch Yermanos I [Germanus I] (1537-1579) ordained him first sub-deacon, then deacon, and then priest. For a year he served at the Holy Sepulchre and then a further twelve years at the Patriarchate, without ever abandoning his ascetic struggle. At one time he went into the Jordan desert, where he spent forty days fasting, in imitation of the Lord (Matth. 4, 1 ff). Thereafter he returned to his duties at the Patriarchate.

After this, he left Jerusalem and continued his pilgrimages. He remained for a time in Sinai, then went to Alexandria and continued throughout the whole of Egypt. After this, he went to Antioch and Damascus, then went on to Crete, arriving finally in Zakynthos, where he lived for five years in a cave, eating only greens, with neither bread or salt. It mattered not how well he hid, he was always discovered by God-fearing believers and in no time numbers of people would be flocking for his blessing and advice. But the voice of the holy Fathers warned him that, for a monk nothing is so debilitating as praise and fame and so he left Zakynthos to live in a small cave in Kefallinia, where he remained for about six years. 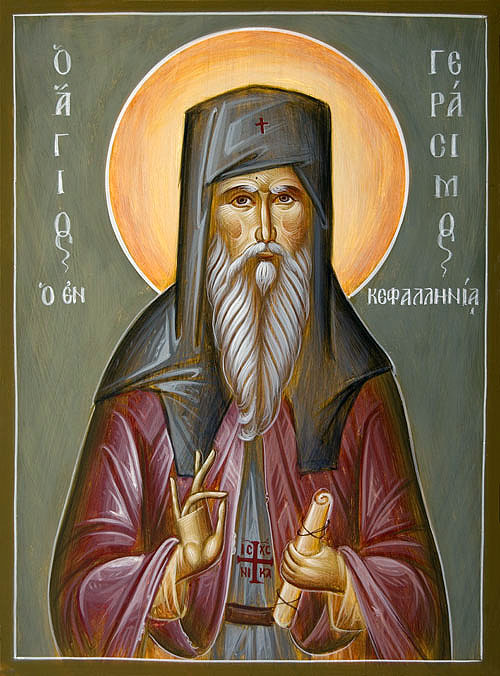 But because it’s impossible for a lamp that’s lit not to shine and to remain hidden, even there it wasn’t long before the faithful discovered the virtue of the saint and then they didn’t allow him to enjoy his spiritual communication with God. In the end, divine providence took him to Omala, an inaccessible part of the island, where there was a little church and a wonder-working icon of the Mother of God. He settled there and cultivated a small piece of land, striving to avoid the snares of the devil. After some time, when his fame had spread throughout the region, he was told, when he was at prayer, that it was the Lord’s will that he should receive disciples. Twenty-five young women quickly presented themselves to submit to his spiritual guidance and the little church was transformed into a monastery. The saint agreed to forgo tranquillity in order to be able to transmit to his disciples the spiritual experience which the Lord had granted him in such abundance. His monastery was called New Jerusalem and it seemed to be inhabited by angels in the body.

Well-stricken in years, the Blessed Yerasimos foresaw the day of his departure from this life and gathered his spiritual children around him to pass on his final instructions. Then he blessed them and joyfully surrendered his spirit to the Lord on August 15, 1579. Given that this day coincides with the Dormition of the Mother of God, we honour his memory on 20 October, the date when his relics were restored. His holy body remains incorrupt to this day, as though he had fallen asleep. It exudes a heavenly fragrance and has worked very many miracles. Saint Yerasimos is the patron saint of Kefallinia and with great boldness, intercedes to God even today on behalf of the island. Of particular importance is the power he has to expel unclean spirits from possessed people, who are brought from all parts to venerate his body.