Priesthood in the Old and New Testaments

The concept of priesthood exists in the Old Testament, though it has a significance and character  that is different from that which it assumes in the New. In the Old Testament, before the time of Moses, every head of a family could offer sacrifices to God and there is no lack of instances where this happened, such as when Noah performed a sacrifice after the flood in gratitude to God for his survival (Gen. 8, 20). There were, of course, priests at that time, but their task was less to perform sacrifices than to teach legal requirements, pronouncing ritual blessings and serving the ark of the covenant, which was called ‘guardianship’.

The institution of the priesthood was established essentially at the time of Moses, who nominated the tribe of Levi for the responsibility of performing the religious obligations of the people in the proper manner, while the family of Aaron and his descendants in particular were chosen by God himself to act as celebrants. In chapter 17 of the book of Numbers, the process is described by which God chose Aaron to be the high priest, when, as head of the tribe of Levi, his rod budded. Because of this, all priests thereafter came from the kin of Aaron, which made the priesthood a hereditary office and gave the family of Aaron a superior place in the hierarchy, since this involved acquired rights in sacrifices and food for idols. 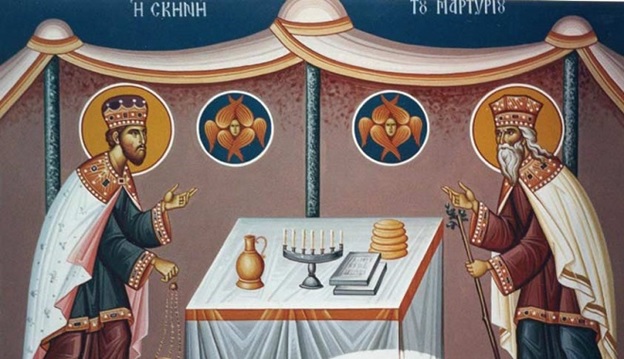 It was the priests in the Old Testament who approached God, as intermediaries between God and humankind: they prayed, offered, sacrificed and purified the whole people. God’s commandment was transmitted to them, and thence to the whole of Israel, and they were to be pure and clean (Levit. 11). They received the priesthood through chrismation from Moses, who acted in the name of God. The ceremony was performed in front of the holy tabernacle, in the presence of the people. Both Aaron and his descendants were first symbolically cleansed with water (Levit. 8, 6). They then stripped off their garments and donned special vestments, which were henceforth worn during the performance of their priestly duties. Moses himself anointed the candidates with oil and sanctified the holy tabernacle of witness (Levit. 8, 10-15). The priests were not to drink alcohol before entering the holy tabernacle and it was their duty to separate clean animals and things from unclean ones (Levit. 10, 9-10). They were also obliged to pray for the forgiveness of the sins of the people, to teach the children of Israel the commandments God had given to Moses (Levit. 10, 11-12) and to be concerned with the health of the people (Levit. 13).

Another item of note in the Old Testament is the reference to the priest-king Melchizedek. He was the king who received Abraham after his victory over King Elam. He blessed Abraham and offered ‘bread and wine to God’(Gen. 14, 18-19). The person of Melchizedek is of particular interest for the New Testament, since he was a prototype of the priesthood of Christ, which is associated with royal and hieratic majesty. This priesthood is considered superior to that of Aaron, since Melchizedek is a model of the priestly office of the Messiah (according to ‘you are a priest unto the ages, after the order of Melchizedek’, Ps. 109, 4). He is, moreover, a person who makes a sudden appearance in the Old Testament, i.e. without the usual genealogy.

Priesthood in the New Testament acquires a different character. Here, as God and human, the dominant personage is Jesus, as High Priest and source of the priesthood. He is the only priest in the New Testament, he performs and transmits the divine sacraments while, at the same time, establishing the Congregation of the New Testament, even though he never attributed to himself the term ‘priest’.

In Saint Paul’s Epistle to the Hebrews, there is an extended reference to the person of Jesus, to his redemptive mission and his priesthood. As did the priests in the Old Testament, Jesus became high priest for the sake of the people, in order to offer gifts and sacrifices for our sins (Heb. 5, 1). However, the priesthood of the Old Testament is not the same as that of Christ, since the one was a preparation for and a prefiguration of the other.

According to Saint Paul, Christ received the priesthood from God himself and is not to be compared to Aaron: he is naturally superior to Aaron  since he was appointed high priest by God the Father himself. He is eternal and has a permanent and non-transferable (non-hereditary) priesthood ((Heb. 7, 24). Jesus is high priest ‘after the order of Melchizedek’, which is superior to Aaron’s priesthood, since Melchizedek has no father, no mother, no genealogy- unlike the other kings. He is eternally a priest and the complete symbol of Christ, the eternal high priest (Heb. 7, 3). At the same time, Abraham’s presentation of one tenth of the spoils to the priest-king Melchizedek (Gen. 14, 20) underscores the inferiority of the priesthood of Aaron the Levite (as a descendant of Abraham) compared to that of Melchizedek and, by extension, to that of Christ (Heb. 7, 4). 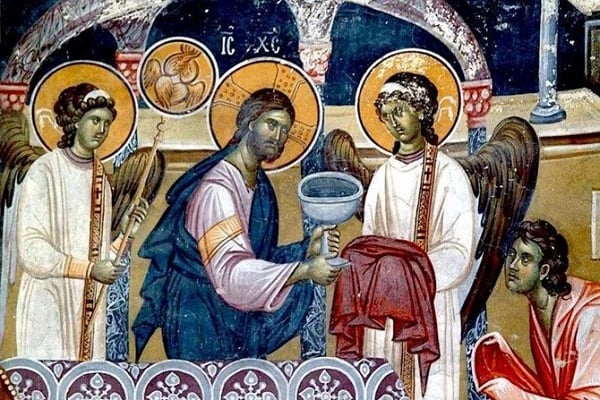 Christ  is a holy high priest, without guile, without stain, separate from sinners and raised above the heavens; one who has no need to perform daily sacrifices for his sins and those of the people, as did the high priests of old, because he did so once and for all when he offered himself (Heb.7, 26-27). He is seated on the right of the throne of majesty in heaven and has become the celebrant in the holy of holies, which is in heaven, and in the tabernacle of truth which was erected by the Lord, not by people (Heb. 8, 1-2). The ancient tabernacle of Israel  was a model and symbol of this tabernacle (Heb. 9, 9). In this way, Christ as Great High Priest bears the full priesthood from God, which is shared by all Christians (general priesthood) and the celebrants of the Lord most high (particular priesthood).

Christ’s priesthood has three offices: hieratic, royal and prophetic. Christ has the hieratic office and, as priest, performed the ultimate sacrifice once and for all, and this was clearly above those of the Old Testament. He ‘offered and was offered’; he was sacrificed  for our salvation, he took our sins upon himself and made us perfect (Heb. 10, 12-14). He also has the royal office, however, since, as Athanasios the Great says, ‘Christ is both priest and king. He is priest since he led himself to sacrifice for us; and he is king because he rules over sin and death’ (P. G. 27, 1364A). Nor should we forget that he is the head of the Church (Eph. 5, 23) and the captain of our salvation. (Heb. 2, 10). Besides this, he also has the office of prophet, given that he teaches and legislates, proclaims God’s truth, illumines our minds and does so in combination with his capacity as king, since he now says distinctly, with supreme authority and legitimacy, ‘I say to you…’(Matth. 5, 22, and elsewhere).

The Apostles received this priesthood from Christ himself, after his Resurrection, during the forty-day period of his presence on earth following this. Apart from teaching them ‘about things concerning the kingdom of God’ (Acts 1, 3) Christ also transmitted to them the Holy Spirit, as well as the authority to remit or retain sins (Jn. 20, 22-23). He also passed on to them the offices associated with his priesthood: the hieratic, that is the celebration of the sacraments; the royal, the authority to shepherd the flock of his Church; and the prophetic, the authority to preach the Gospel [1].

The Apostles, then, received their priesthood and the command to continue Christ’s task throughout the world ‘until the very end of the age’ and thus had to leave successors to continue their work and their priesthood. So they proceeded to transfer the grace of the priesthood by ordaining deacons and priests [2], as they did with Titus and Timothy, for example. These were to administer and serve the churches which were being established and their flocks, while they were also told to ordain new successors in their turn who would continue Christ’s command (‘go’, ‘make disciples’, ‘baptize’, ‘teach’) until the end of the age.

[1] ‘Therefore go and make disciples of all nations, baptizing them in the name of the Father and of the Son and of the Holy Spirit, and teaching them to obey everything I have commanded you. And surely I am with you always, to the very end of the age’ (Matth. 28, 19-20).