Christian Morals, as they Emerge from the Incarnation of Logos – 2

Within such a sea of perverted thoughts and decisions, people, with their own criteria, also shaped the outside world, and ordered their relations with their surroundings accordingly, with both other people and things. The fear of death, self-concern, the passion of egotism, the insatiable desires of greed that fuels them, the uncertainty of time and the various other acquired flaws and evils made up the characteristics of the “image of the person of dust”. According to the prophet, the wound was not “in a part” so that it might be covered with an emollient or a bandage; it was an infection from head to toe. God’s infinite goodness, His boundless charity, His ineffable mercy condescended to enter such great unhappiness and He was pleased to make provision for our salvation. 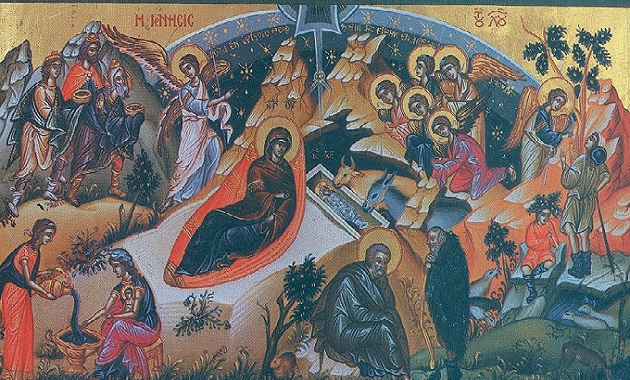 So “when the fullness of time had come, God sent forth his Son, born of woman, (not only to save us from death and corruption but), so that we might enjoy adoption” (Gal. 4, 4-5). No-one else could encompass the extent of the catastrophe except the first Architect, except Him “through Whom all things were made”. And, indeed, He “emptied Himself, taking the form of a servant” (Philip. 2, 7), becoming a human person in order to save people. It was necessary for Him Who, immediately after the disobedience, condemned the human race, saying “Dust you are and to dust you will return” (Gen. 3, 19), to take up again this penance from “people of dust”, giving us the attributes of “people of heaven”. The first voice revealed our plight of becoming mortal; the second was needful to bring us back to life. “Awake, sleeper, and arise from the dead, and Christ will shine on you” (Eph. 5, 14) needed to be heard.

The fall of humankind was not merely our removal from the sphere of life into the dominion of death. The whole of our psychosomatic world was distorted, which is why God undertook to repair it and why He, in His Sublime Hypostasis, wished to assume it, in order to infuse it with real life from Himself and bring it back to the divine character it had before the fall. The main trait which characterized the human condition before the fall was divine grace, which gave people those features which were beyond nature, “in the image and likeness” of God. Our Lord brought back this grace to us, because, having put on the whole of our nature (except for sin, which is not natural and never belonged to our nature), He transmitted all His divine graces and capacities to us.

The assumption of human nature by the Word of God, gave back to the human race what we had lost with the fall. It gave back to the body harmonious action and desire [without sin], while to the soul and mind it gave rational thought and decision-making, so that there would be no room for sin. Through His personal contact, Christ taught and transmitted the whole of the divine revelation concerning the past, present and future and sheltered His faithful from all the forms of deceit and delusion emanating from the Devil. Through His divine commandments, He restored harmony to the discordance of the natural terms and laws, to each person individually and also to society as a whole. And through His own virtuous life, He demonstrated that what He told us to observe was actually feasible.

But what we find in superabundance in our sweet Jesus, is the great love with which He treated us. Self-interest, greed, lies, hypocrisy, egotism and anything else which perverted the morals of humankind, all of them, as well as the unnatural flaws, were cured by selfless divine love, which the Godly nature of Christ transmitted to us in the human nature that He assumed. And so, with the revelation of the true God, the true human person is also manifested, the “new” person, “created by God”, who is presented as a combination of faith and works, that is as a revelation of God and an experience in Christ.

The Christian experience, which is a vivid reflection of the life of Christ, is not an attempt to observe external forms and rules which are alien to our nature. On the contrary, the person who is reborn in Christ naturally and effortlessly responds to their new persona in Christ, since “whoever has been baptized in Christ has put on Christ”. The power and shape of sin, as an unnatural way of life, are dispelled, because everything has become, by grace, new, rational, Christ-made, natural and beyond nature.