Saint Anastasia, the Deliverer from Potions

The holy and most brave martyr Anastasia lived in Rome at the time of the Emperor Diocletian (284-305). She was the daughter of a pagan, by the name of Praetextatus. Her mother, however, whose name was Fausta, was a Christian and so Anastasia was taught the faith in Christ by her. And, moreover, Fausta gave her daughter into the care of Chrysogonos, a godly and devout man, who taught her the Scriptures. 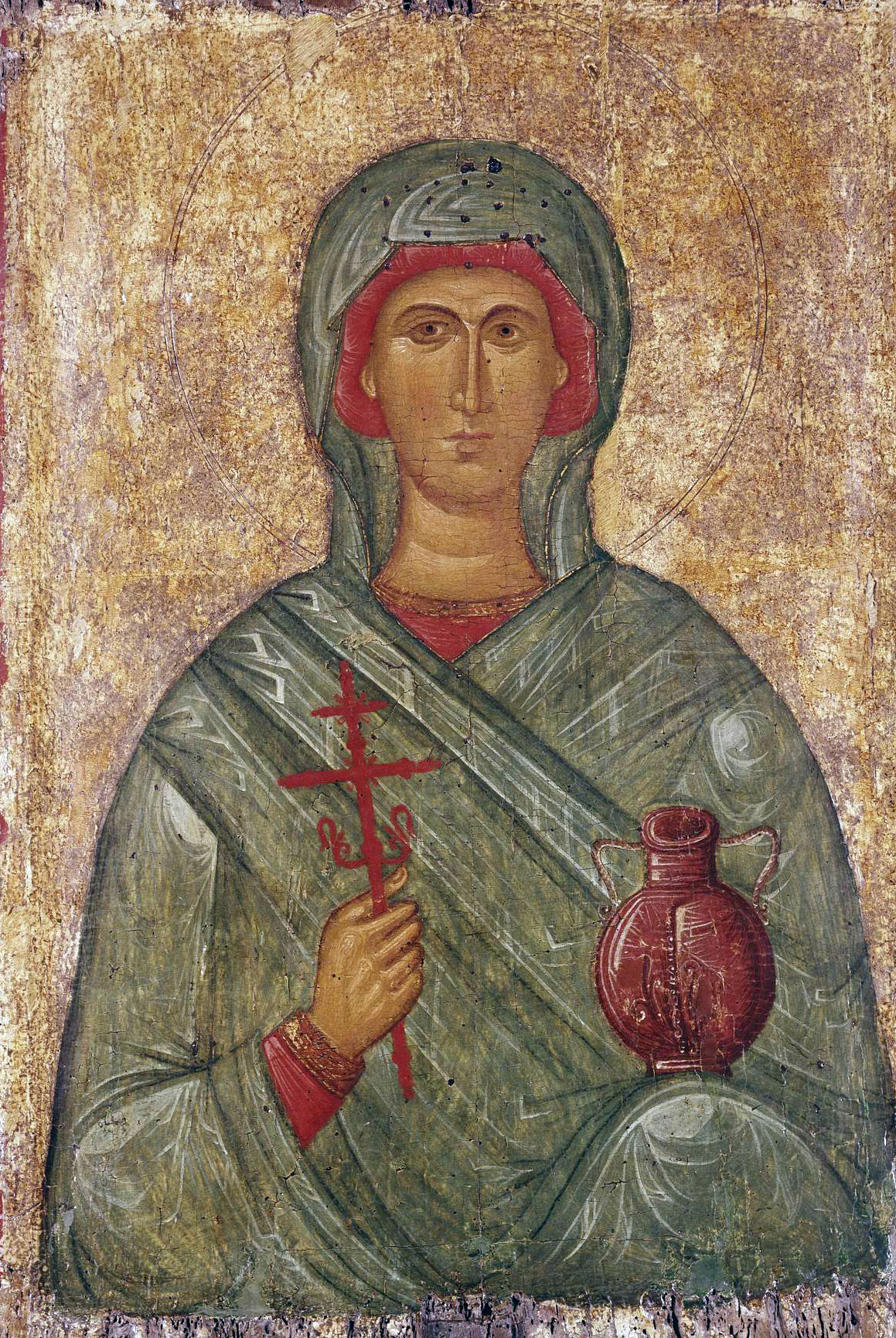 Anastasia married a pagan called Puplius though she felt no uxorial love for him, because he did not believe in Christ. And so she would not agree to conjugal relations with him, but rather pretended to be constantly ill. He did not realize, but Anastasia was secretly doing tasks which were pleasing to God: she wore a tunic that was simple and cheap, would meet with women who had various needs and provide them with all possible assistance. Moreover, accompanied by a single servant, she would go to prisons where Christians were being held, suffering for Christ, and would bring them great relief: she would undo their chains, anoint their wounds and gently sponge away the blood; she would also provide them with appropriate and necessary food.

One day, however, her husband Puplius was told about all this and he had his wife imprisoned. Anastasia was very sad about this, because it interrupted her God-pleasing efforts. Later, however, as Puplius was on a voyage somewhere, his ship foundered and he was drowned during a mighty storm. Free now of all hindrance, Anastasia first of all distributed her belongings among the poor. Then, less fearful than she had been, she offered her services to those who were suffering for Christ: she collected the holy relics of those who had been killed and gave them an orderly burial; she strengthened many in the faith; and she prepared them for martyrdom for Christ. 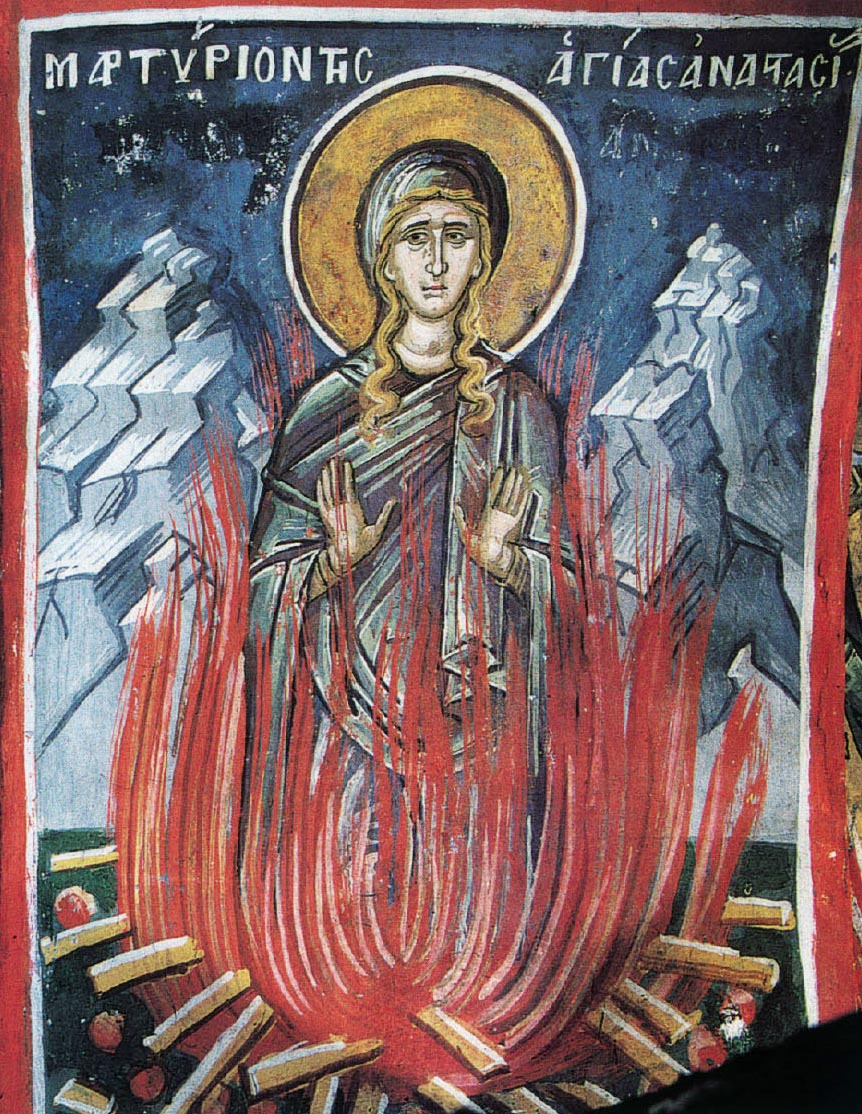 Because of these activities and her faith in Christ, Anastasia was arrested by the pagans and, after being interrogated and tortured by various local leaders, was thrown into the sea, together with other women. But by the miraculous intervention of God, she was saved and washed up on the coast. The governor who had given the order for her to be drowned was furious when he learned that the saint had come to no harm. He therefore instructed the executioners to tie her to wooden stakes and light a fire all around her, to burn her, an order they carried out to the letter. And so the holy martyr Anastasia ended her life and was crowned by the Lord with the unfading garland of martyrdom.

Your lamb cries out to You Jesus in a loud voice: “I long for You, my Bridegroom, and seeking You, I struggle. I am crucified and buried with You in Your baptism. I suffer for You, that I may reign with You and I die for You that I may live in You. Accept me, who am offered to You with longing, as a spotless sacrifice to You”. Through her intercessions, save our souls, by Your mercy.

Rather in the same way as the Dismissal Hymn for Saint Nicholas is used for a number of other hierarchs, this apolytikio is sung for many female martyrs.

It is likely that she was actually martyred in Sirmium, a prosperous imperial city in Serbia (today Sremska Mitrovica in Vojvodina) where she had gone, possibly with her mother, to comfort Christians there. This is entirely probable: between 251 and 285, eight Roman emperors were born in the city or in the surrounding district, and Diocletian himself was from neighbouring Dalmatia. It seems that she went to Sirmium from Aquileia, where she left her mentor Chrysogonos, who was later martyred there.

By a curious coincidence “Sirmium” is derived from the verb “to flow” and means something like “wetlands”; Aquileia was a town at the head of the Adriatic, near lagoons. Some time between 458 and 471, her relics were transferred to a church in Constantinople dedicated to the Resurrection (Anastasis) of Christ, which was then renamed for Saint Anastasia. Later the head and a foot were sent to the Patriarchal Monastery of Saint Anastasia, at Vasilika, near Thessaloniki. On the night of 23 April, 2012, however, they were stolen in a well-planned raid. Some of the miscreants were brought to trial in Thessaloniki in July 2013 and were sentenced to 10 years imprisonment, but the relics have yet to be recovered. Her name “Deliverer from Potions” is connected to her protection from poisons and other harmful substances. WJL.