At one time he hit his leg on something and went to a hospital, where they inserted a plate into his hip. But it gave him a lot of pain. The then Metropolitan of Switzerland, Damaskinos, had him brought to Switzerland to be examined by the doctors there. He was taken to a hospital where they discovered that in the first operation he’d been given a plate which was 1cm. too big, so he required fresh surgery to reduce the size. Before allowing him to leave the hospital, they gave him a general examination and discovered a large stone in his left kidney, so they kept him in for another operation. 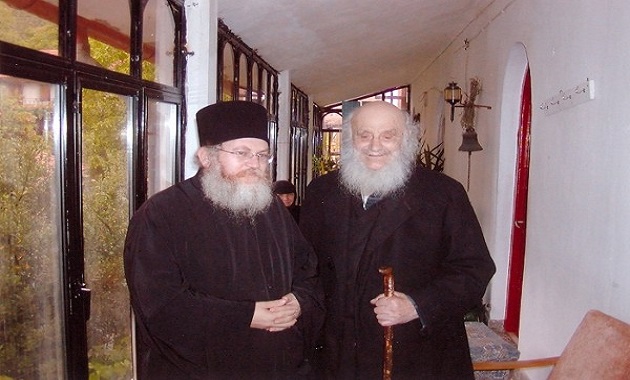 The elder recalled: “When I was in the room, a monk appeared. So we went out onto the balcony together, sat down and talked for about fifteen minutes, during which time I told him about the stone and the impending operation. The monk then said: ‘I’m Saint Nektarios and I’ve come to see you.  I was also a sickly person and passed away in the Aretaieio Hospital. I put up with slander and sickness, and was patient.  God gave me great grace because of my patience’. Then he touched me and left. After Saint Nektarios left, I had the urge to urinate and I did so into a small bowl. When I did so, a stone came out with the urine, about the size of a small orange. I picked it out with a paper napkin and put it in the drawer of the bedside cabinet.

The operation was set for the next day. The Swiss doctor came to me and said: ‘Prepare yourself for the operating theatre’, but I told him I didn’t need to. I opened the drawer and showed him the stone. When he saw it, the doctor said: ‘You Orthodox have living faith; we’ve contaminated ours’. The operation was cancelled and the stone rested on the Swiss doctor’s desk for many years”.

What I saw in the Elder, apart from his saintliness, which was very obvious and is hardly to be found among people today, is that he was a man who lived in great obscurity there in Dadi. He didn’t like to  be seen, didn’t enjoy making a show, disliked being the centre of attention. This may be why he didn’t gather a larger sisterhood around him. Once when we were talking he said to me: “I’ve stayed here, lived here in insignificance and have occupied myself with prayer, the Liturgy and so on”. He didn’t want attention.

Even in the village, in Dadi, they didn’t really know him, because he went there only rarely. He stayed in the monastery, performing practical tasks, was the Monastery priest, and spent a long time in prayer, from what he told me. I saw for myself that, once he’d said something, he’d withdraw into himself and pray. But he did give very good advice. He told me how much the Grace of God helped him: “I’m unlettered, yet many well-educated people come here, university professors, and my mind opens and I tell them so many things, though I don’t know how”.

A young boy went to the Elder and asked: “What shall I do?”. The Elder told him: “You’ll become a monk”. And even though the boy hadn’t thought about it, he suddenly felt a fire within him and did, indeed, become a monk. In other words, you’d go to this man in the dependency in Athens and you’d see that he really wasn’t of this world. He was a hermit. He kept to his schedule as a monk. He’d get up in the night and pray.

Icon of the Mother of God the Consolation. A copy of the wonder-working icon which is kept as a sacred treasure in the Holy Monastery of Vatopaidi. This icon was in the Elder’s cell and was his favourite.

He had great love for Our Most Holy Lady. He asked and we took him the Holy Girdle [which is kept at the Holy Monastery of Vatopaidi]. He was greatly pleased to have had the Holy Girdle at Dadi and was overwhelmed when he received it.

The first time I met him he told me about Saint Nektarios visiting him  in the hospital in Geneva and saying: “Let’s sit outside where it’s cool” and so on. And the lump he passed from his kidney? These are great signs.

Elder Amvrosios fell asleep in the Lord fifteen years to the day after Elder Porfyrios. He was a man of God. The Church is the mystical body of Christ.

Whenever we went to Athens, we would visit him.

May we have his blessing and prayers. After his demise, I named one of our new monks Amvrosios in his honour.

His life, presence and witness to Christ, the life he led, strengthens our faith.

May his blessing be upon us.

Elder Amvrosios the Athonite, together with the Abbot of the Holy and Great Monastery of Vatopaidi, Elder Efraim.