The Saints Stand By Us

When we refer to the life of a saint, we tend to extol their actions and promote them mostly on the basis of the wonderful things they performed. From very ancient times, it was thought that this elevation and emphasis, sometimes even exaggeration, in the narrative of the life of a saint was a way of rendering honour to them. 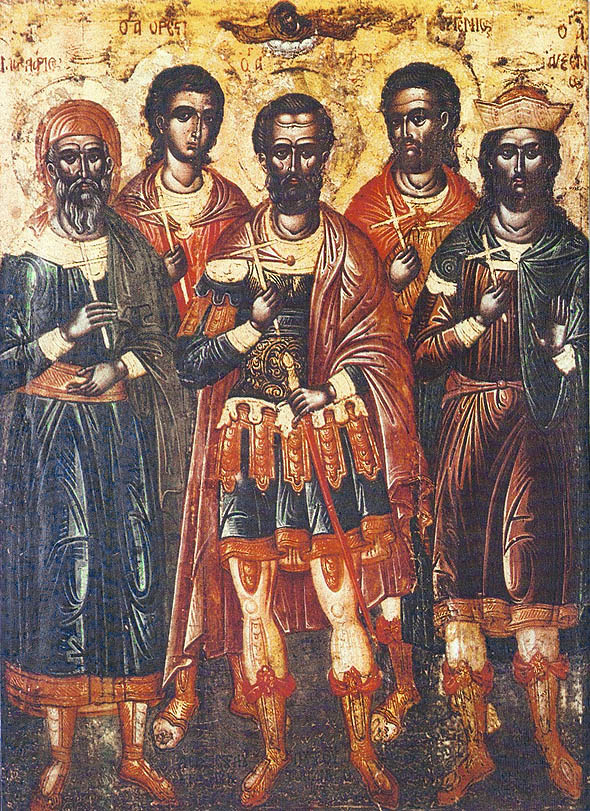 This practice may be considered beneficial in terms of uplifting the minds of the faithful, but it does create a sense of distance between the saint and other Christians: the impression is given that the saint was a person with distinct abilities, someone who, by their very nature, had the ability to distinguish themselves in martyrdom or virtue. But in this way, Christians are unwittingly discouraged from engaging in spiritual struggles, since they believe that they themselves are in no position to avoid the traps and temptations which continuously arise.

Let’s take the case of the five martyrs whom we honour on December 13, Eustratius, Auxentius, Eugene, Mardarius and Orestes, (martyred at the end of the 3rd century). We have there a different approach, however. This concerns a miracle mentioned by the Protopapas of Nafplio, Nikolaos Malaxos (16th century) and preserved by Saint Nikodimos the Athonite. The event took place at the New Monastery on Chios, on the day of their feast.

On that that day, the weather was so appalling that the fathers from the monastery were unable to get to the dependency, and people couldn’t get there either. After the local priest had started Mattins, he saw five men whom he didn’t know coming into the church. The features were similar to those of the saints being honoured, as represented in their icons. Two went to the right choir, two to the left and the youngest, who looked like the martyr Orestes, conducted the chanting, as canonarch. So the Mattins service continued until the moment when the canonarch came to read the narrative of their martyrdom.

At one point in the narrative, the governor of Sebastia, Agricola, ordered a red-hot bed to be brought, on which they laid Orestes. The Life says that Orestes “quailed” (εδειλίασεν). The young canonarch, however, didn’t read what was written, but changed the verb and said “smiled”. He was at once sharply rebuked by the eldest of the five, the one who looked like Saint Eustratius, who told him to read the text exactly as it was written. The young canonarch, who was clearly Saint Orestes, and was ashamed of his want of courage, read the Life again, but again said “smiled”. The eldest, obviously Saint Eustratius, again told him off and said: “Read what’s written as you experienced it, because you didn’t smile when you saw the bed, your courage failed you”. 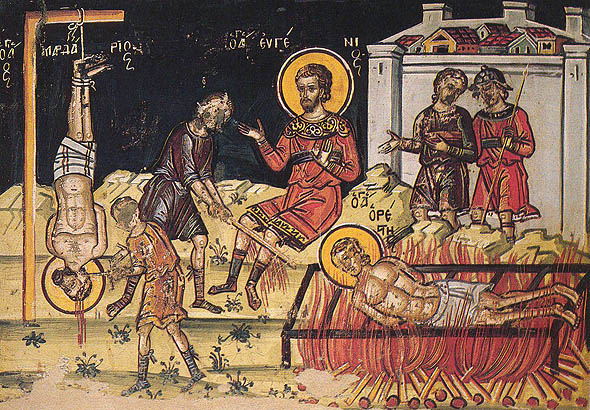 The martyrdom of Saints Mardarius, Eugene and Orestes

In the end, the five saints disappeared and, when the priest had recovered, he completed the Divine Liturgy and related the wondrous event to his fellow citizens.

It’s clear, then, that the saints are people, just like the rest of us, with their own strengths and weaknesses. There’s not something distinctive or special in their nature that helps them to conduct their struggle successfully. If we wanted to single out something, it would be their great love for God, which helped them overcome their individual fears and weaknesses.