Christ’s descent into the tenebrous realms of death – Part 1

The service has already given us all the grace and joy, the perfection of the meaning of the Holy Days. We’ve been able to proceed liturgically, together with the Lord, from the garden at Gethsemane to the dread Golgotha and as far as the life-bearing and life-receiving Tomb, the alien tomb, in which He spent three days. I note this, the alien tomb, because the Lord came ‘to his home and his own kin did not receive him’, He came ‘to his own’ and ‘his own’ wouldn’t open the door to Him, so He remained, perforce, a stranger. A stranger to the world He’d created. Α stranger to his special, beloved people. A stranger till His death, when there wasn’t a single grave anywhere to receive Him, but that of the righteous Joseph of Arimathea, which welcomed Him. 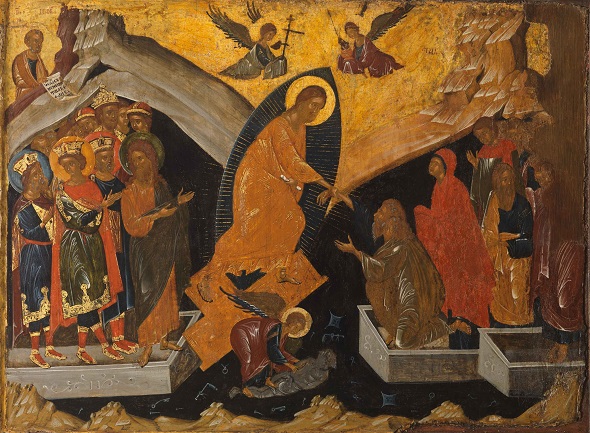 Today the Lord has descended into the repositories of Hades. Saint Peter says he descended there ‘in order to preach to the spirits in prison’. He descended into the dour kingdom of death, the sombre reaches where there’s never a smile, to seek ‘all Adam’s kin’, the whole of humankind, from Adam and Eve down to those who had just died at that moment.

He descended into Hell and illumined it; and with His presence Hell became Paradise. The departed spirits of the righteous, who had been thirsting for His presence, with longing and with the desire for redemption, life, light and joy, leapt and rejoiced.

As much as the devil was embittered, together with his kingdom, at receiving within it the presence of the Victor of life, so much and more did the spirits of the departed Saints and Righteous rejoice, delight and exult, and they hastened to receive the life-giving embrace from Him Who descended into the depths of Hell to save the human race. And after Christ’s resurrection, ‘many bodies of the departed’ Saints arose and went into the holy city of Jerusalem and appeared to many. This means that God permitted a partial resurrection, not of all people but of some of the recently departed. In other words, people who had died a little while, a few years previously and who were still remembered by those who knew them. They may have died 20 years previously, but there still would have been people who remembered that Isaiah, that Jacob, that Zachariah, that Esther as a next-door neighbor, or as a friend, a grandfather, an uncle, a mother, father, or elder brother. They were easily recognized and God permitted this great miracle so as not to leave the slightest margin for doubt, not only regarding His own Resurrection, but of the general resurrection of all the dead.

I’d say that Christ isn’t much bothered, as far as He Himself is concerned, whether or not we believe in His resurrection. He’s got nothing to gain or lose either way. But He does care and is very much bothered if we don’t believe, because then we’re lost, we’re off the Vine. We’re withered branches and we’ll be burned in the fire of Hell that is never extinguished. That interests Him. That we shouldn’t be lost. Apart from that, whether we believe or not brings Him no glory nor deprives Him of any joy nor affects Him in any other way.

But we should believe in His own Resurrection and the expected resurrection of all of us at the Judgement Day, when the trumpet of the archangel will sound and summon us. And the earth will give back what it’s taken, the soil will render up the body, the fire whatever it’s consumed, the sea what it’s swallowed, the animals whatever they’ve torn to pieces. The bodies will be returned and, united to the soul, will be resurrected. Because, ‘once the soul has been born, it doesn’t die’. The death of the soul is something else.