Constantine the Great, Lactantius, and Christianity 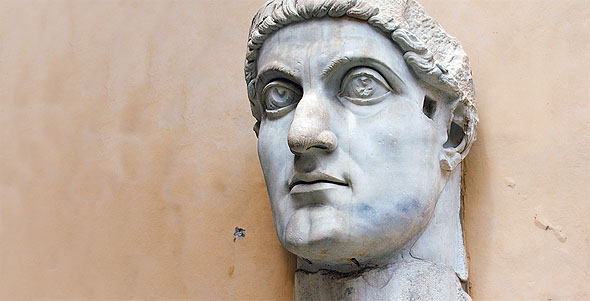 Constantine brought about many changes in the empire: i) Crucifixion was abolished, ii) infanticide – the killing of unwanted infants – was abolished, iii) the practice of slavery was discouraged and many slaves were set free, iv) the gladiatorial games were suppressed -although they were not yet completely eliminated, v) Christian men were chosen as emperor’s advisers, vi) the Church was made tax-exempt, vii) the first day of the week, Sunday, was set aside as a sacred day of worship. Sunday was made an official Roman holiday so that more people could attend church[13].

It is supported that Constantine embraced Christian Church not only for theological reasons, but also for political. As a politician he understood the increasing importance of the Christian minority into private and public life. The fact that Christianity became his religion and his children’s shows that Constantine wasn’t guided by political motives only. He was guided by religious fervor too. Generally, Constantine I is considered the father of the Byzantine Empire and one of the most influential figures of Western history[14].

Lactantius and Eusebius of Caesarea

Lactantius, a celebrated father of the Church in the beginning of the fourth century of the Christian era, famous for the purity of his Latin style, and sometimes called the Christian Cicero was born in 240AD. Lucius Caecilius Firmianus Lactantius was an African by birth and a pupil of Arnobius[15] who taught at Sicca Veneria. He became a Christian apologist, although he was not born into a Christian family. He did not become Christian until the time of persecution (AD 303-313). When he converted to Christianity, he was about 50 years old[16].

The little we know about his life comes from a short biography and various brief remarks by Jerome. His fame was such that he was summoned by the (pagan) Roman emperor Diocletian (284–305) to teach Latin rhetoric at Nicomedia -a Greek city in Bithynia and Diocletian’s eastern capital[17]. It was probably at this period that he embraced the Christian faith, and we may perhaps be justified in supposing some connection between his poverty and his change of religion[18] In this period he turned to writing Christian apologetics for the educated pagan and for Christians disturbed by the challenges of the accepted intellectual wisdom. Feeling that technical Christian terminology had obscured the effectiveness of previous apologists, he shunned its use whenever possible.

He wrote in Latin with ambition to vanquish first national religion and thought, and then expose the teachings of Christianity. For that purpose, he had admirable zeal, rhetorical and literary talents and encyclopaedic knowledge of Greco-Roman culture. Lacking, however, deep philosophical education and theological understanding of the mystery of the Church, because he became a Christian at the age of about 50 years old, as we referred, He had experienced Christianity of surface and unending, as impatient catechumen[19].

Lactantius was unaware with Greek ecclesiastic writers and with the text of the Holy Bible. He knew the Holy Scripture mainly from collections of biblical passages (Testimonia). Patrick Healy says of Lactantius’ work, “The beauty of the style, the choice and aptness of the terminology, cannot hide the author’s lack of grasp on Christian principles and his almost utter ignorance of Scripture”[20]. For these reasons, he did not manage to express both ecclesiastical theological climate of the time, as reaffirmed his enthusiasm for the new religion and reasons that justified his conversion to it, as some apologists did earlier. The most important is that he contributed to the shaping of Christian Latin language [21].

[10] Burckhardt presents Constantine as a clever and too ambitious emperor, who sacrificed everything to satisfy his thirst for power, J. Burckhardt, The Age of Constantine the Great, University of California Press, California 1983 p. 326. The German theologian Adolph Harnack supports the same, in his book “The expansion of Christianity during the first three centuries” (English transl. of J. Moffatt, 1904).

[15] His major concern is to differentiate the Christian God from the popular deities of his time, and he apparently constructed his doctrine of God along Epicurean lines. Cf. G. E. McCracken, Arnobius of Sicca: The Case against the Pagans,  Westminster, Md.: Newman, 1949) 29-30.