Alexander, the New Martyr from Munich: his memory is celebrated on 13 July, the anniversary of his death by beheading. At the age of 25 he was condemned to death by the Nazi regime, for “ultimate betrayal”

Alexander Schmorell was the co-founder – along with his friend Hans Scholl – of the anti-Nazi resistance group the ‘White Rose’, which tried to stir up the conscience of the Germans against the regime by distributing leaflets through the post.

We were made aware of his canonization through the official website of the Moscow Patriarchate (6.2.2012 Russian style/Old Calendar). The saint is depicted in a white, medical gown and holding a cross together with a white rose, the emblem of the White Rose and at the same time the symbol of Easter, the symbol of the victory of life over death.

The name was suggested by the new martyr, inspired by an excerpt from his favourite author, Dostoevsky, in the novel, Brothers Karamazov: It comes at the point where he is describing the return of Christ to Earth to raise a girl from the dead. “The young girl sat up in her coffin and looked all around, smiling with bemused eyes wide open, holding a bunch of white roses which they had placed in her hands…”. At which point the Grand Inquisitor recognizesChrist, has him arrested and then launches into his famous monologue.

The heart of the movement was made up of students of the medical faculty of Munich University who pursued their studies at the same time as being enlisted in the army. After the battle of Stalingrad their activity reached a climax with them distributing leaflets by hand and writing anti-Hitler slogans on walls.

On 18th February 1943, the movement, which for months had been the target of the Gestapo, was finally broken up. Just four days later, after summary proceedings at a show trial, the siblings, Hans and Sophia Scholl, as well as Christoph  Probst, suffered execution by decapitation, the sentence being handed down by the kangaroo ‘People’s Court’ of the notorious Roland Freisler.

Alexander Schmorell suffered an identical fate on 13th July of the same year, having been arrested in the April. At his trial he did nothing to improve his position. He candidly admitted, in front of Freisler, to having anti-Nazi beliefs, provoking a hysterical outburst from Freisler who screamed at him calling him a ‘traitor’. 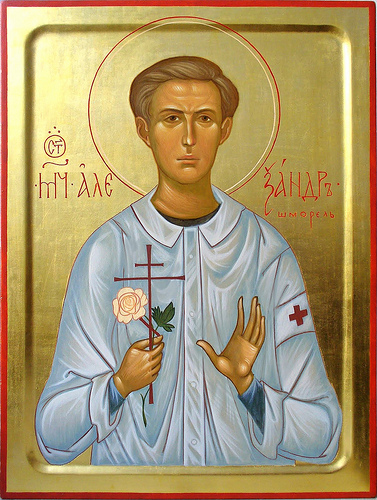 He was born in Russia of a German father, a doctor, who had been established in Russia for years, and a Russian mother. It was for this reason that Alexander was christened into the Orthodox faith. And indeed, Alexander was raised Orthodox, despite the fact that both his father and his step-mother were Roman Catholic. He participated in catechism classes, went to church frequently and was regularly to be seen with a Bible. That he was familiar with texts of the Church Fathers was obvious even from his correspondence.

On the website of the Russian Church Abroad there’s an article which reports that, “Confessing the Orthodox faith boldly, he resisted the atheist Nazi regime and exhorted his close friends and fellow students to do the same, founding the “White Rose” movement”. On the Patriarchal website there appears a portion of the sermon given when Alexander was declared a saint. The sermon was by Ilarion Kapral, Metropolitan of Eastern America for the Russian Church Abroad: “With his life of self-sacrifice, his fortitude, and his martyr’s death, Alexander Schmorell gave witness to his love for God and his love for His image as reflected in his neighbour”. 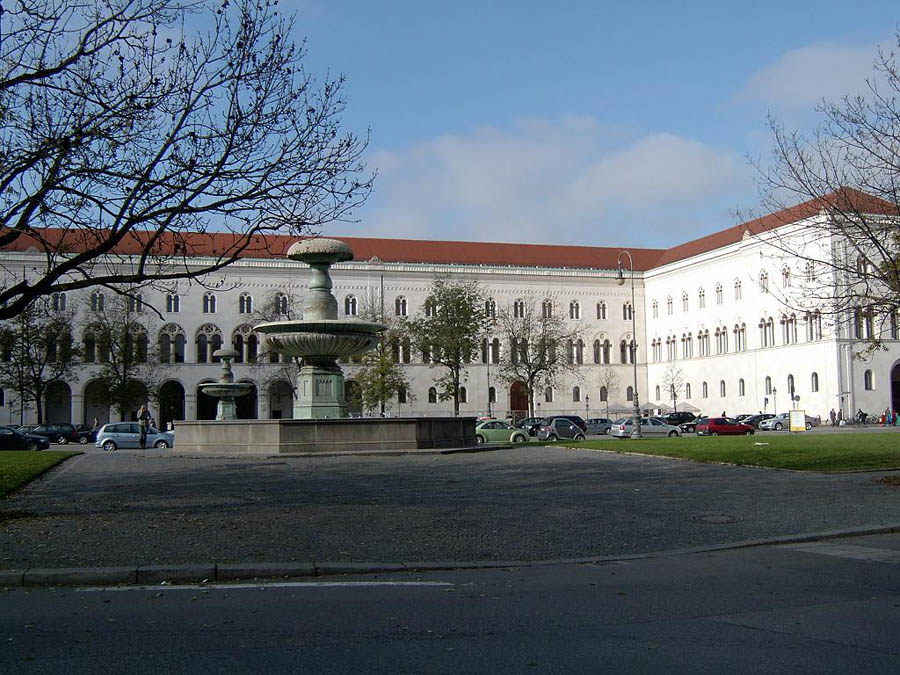 The content of the White Rose leaflets, of which the new martyr was the primary author – along with Hans Scholl,  leaves no doubt that the struggle was not simply political. The 4th leaflet emphasizes, among other things:

“Every word that comes from Hitler’s mouth is a lie. When he says peace, he means war, and when he blasphemously uses the name of the Almighty, he means the power of evil, the fallen angel, Satan. His mouth is the foul-smelling maw of Hell, and his might is at bottom accursed.

True, we must conduct a struggle against the National Socialist terrorist state with rational means; but whoever today still doubts the reality, the existence of demonic powers, has failed by a wide margin to understand the metaphysical background of this war. Behind the concrete, the visible events, behind all objective, logical considerations, we find the irrational element: The struggle against the demon, against the servants of the Antichrist.

Everywhere and at all times demons have been lurking in the dark, waiting for the moment when man is weak; when of his own volition he leaves his place in the order of Creation as founded for him by God in freedom; when he yields to the force of evil, separates himself from the powers of a higher order; and after voluntarily taking the first step, he is driven on to the next and the next at a furiously accelerating rate.

Everywhere and at all times of greatest trial men have appeared, prophets and saints who cherished their freedom, who preached the One God and who [through] His help brought the people to a reversal of their downward course.

Man is free, to be sure, but without the true God he is defenceless against the principle of evil. He is a like rudderless ship, at the mercy of the storm, an infant without his mother, a cloud dissolving into thin air. I ask you, you as a Christian wrestling for the preservation of your greatest treasure, whether you hesitate, whether you incline toward intrigue, calculation, or procrastination in the hope that someone else will raise his arm in your defence? Has God not given you the strength, the will to fight? We must attack evil where it is strongest, and it is strongest in the power of Hitler”.

Scholl Square in Munich, at the central building of Munich University. It was given the name because it was here that the leaders of the White Rose movement were arrested by the Nazi authorities.

The Germans knew about the Nazi crimes

The 2nd leaflet denounced both the persecution of the Polish Jews and the extermination of at least 300,000 of them. It adds: All male offspring of the houses of the nobility between the ages of fifteen and twenty were
transported to concentration camps in Germany and sentenced to forced labour, and the girls of this age
group were sent to Norway, into the bordellos of the SS!

Why tell you these things, since you are fully aware of them – or if not of these, then of other equally grave
crimes committed by this frightful sub-humanity? asks the leaflet, which is simultaneously documentary evidence of the complicity of the majority [of the German nation] and also shoots down the later claim that ostensibly they knew nothing.

Each man wants to be exonerated of a guilt of this kind, each one continues on his way with the most placid, the calmest conscience. But he cannot be exonerated; he is guilty, guilty, guilty! It is not too late, however, to do away with this most reprehensible of all miscarriages of government, so as to avoid being burdened with even greater guilt.

In his last letter to his parents from prison, Saint Alexander wrote: Now it shall be none other than this, and by the will of God today I shall have my earthly life come to a close in order to go into another, which will never end  and in which all of us again will meet…Unfortunately this blow will be harder for you than for me, because I go in the certainty that, in my deep conviction, I have served the truth. All of this leaves me with a clear conscience despite how near the hour of death is.

In just a few hours I will be in a better life, by my mother, and I will not forget you. I will ask God to grant you solace and peace. And I will wait for you! One thing, above all, let me leave on your hearts: Never forget God!!!

On June 18, 1943, he wrote to them: I have recently read in a very good and meaningful book something that seems to be very fitting for you all: “The greater the tragedy of life, the stronger one’s faith must be; the more it seems that we are forsaken, the more confidently we must commend our souls into the hands of God the Father. And Abbot Theodore from Byzantium [Theodore the Studite] writes: “Therefore have I thanked God for my misfortunes and bowed myself completely to the unfathomable judgements of His Providence”.

Since February 2012, Alexander Schmorell has been honoured as a local saint in the German bishopric of the Russian Church Abroad. This Church of the Russian exiles was at odds with the Moscow Patriarchate for a long time, criticizing the latter’s relations with the Soviet regime, but returned to communion with it, and to worship with the rest of the Orthodox Churches, in 2007. This canonization of the new martyr was the first since the reunion of the two Churches.

Thus the origin of the struggle of the new martyr Alexander and of the White Rose was in fact spiritual: the criminal aspect of Nazism being inextricably linked to its anti-Christian and neo-pagan character. The consequence of temptation is the relinquishment of the God-given gift of freedom, the loss of which leads to ever greater degeneration. Moreover, complicity is passive acceptance, on the part of the general public, of crimes detrimental to one’s neighbour which are perpetrated by an authority which is not only tyrannical but also subverts the common criminal code.

“We celebrate your radiant memory, we imitate your courage, with resistance to ungodly powers and enemies”. From the tropario of the Saint, who should illumine all of us, at a time when we’re all being subjected to similar temptations. May the force of character through which the new-martyr Alexander and the other young people in the White Rose found the courage to condemn the ungodly practices of their homeland, at the cost of their own lives, inspire us here in Greece to withstand the onslaught of today’s Greek Neo-Nazis.