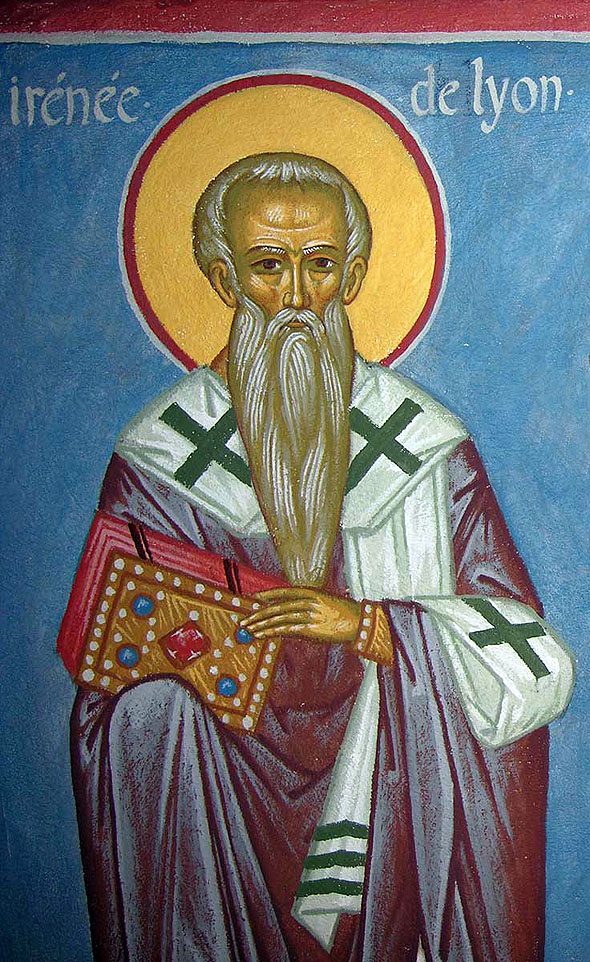 Our holy and God-bearing father Irenaeus, who, by divine providence received the name of peace [ειρήνη (eirene) in Greek] and became a messenger of the Holy Spirit, was born in Asia Minor in about 140. From his early youth in Smyrna he was nourished by the teachings of his elder, Saint Polycarpos the bishop (23 February), who passed on to him the tradition he had himself received from St. John the Theologian. In this way, he learned to remain true to the Apostolic tradition of the Church. He taught that: “God placed the Apostles, prophets and teachers and all the rest of the energy of the Holy Spirit in the Church. By the Spirit, then, all those are excluded who, having refused to have recourse to the Church, have deprived themselves of life, with their false doctrines and their immoral actions. Because where the Church is, there is the Spirit of God; and where the Spirit of God is, there is the Church and every gift. And the Spirit is Truth”.

After a sojourn in Rome, he became a priest of the Church of Lugdunum (Lyons) in Gaul [France of today]. This was at the time of the persecutions of Marcus Aurelius (ca. 177). In his capacity of priest of this Church, he was charged with the task of bringing to Pope Eleftherios of Rome the wonderful letters of the martyr saints of Lugdunum, [they were still in prison at the time of writing] which are addressed to the Christians of Asia and Phrygia and describe their glorious struggle, in an effort to help them to reject the heretical dogma of Montanus [while also making an appeal for unity and tolerance within the Church].  Martyrdom was indeed the outstanding testimony to the truth, the sign of the victory of the Spirit over the weakness of the flesh and a pledge of our expectation of the Resurrection.

On his return to Lugdunum, Irenaeus succeeded Saint Pothinos, who had just been martyred (2 June), at the helm of the Church. Now a bishop, who had inherited from the Apostolic tradition the “sure gift of the truth” and therefore was able to preach and interpret the Gospel, he devoted his life to witnessing to this truth and imitating the martyrs [martyr = witness, in Greek]. “We must love with exceptional ardour whatever comes from the Church and retain the tradition of truth firmly”, he taught. With commendable zeal, he attempted to convert the barbarians around him to the Faith, but his concern was also with the Church as a whole. Thus, he wrote to Pope Victor on behalf of all the bishops in Gaul, of whom he was first in rank, to prevent him from breaking off communion with those Churches in Asia Minor which celebrated Easter on the 14th day of Nisan [the Quartodecimans]. He claimed that since this was an ancient custom which had been passed down by their predecessors and that peace reigned among them, there was no call to impose uniformity because, “disagreement regarding the fast consolidates unanimity regarding the faith”. 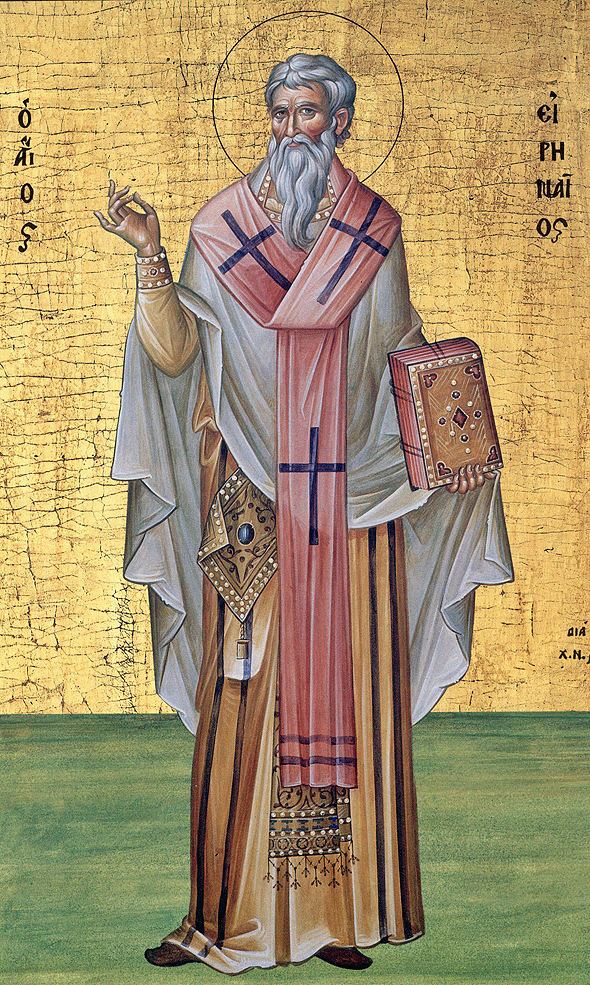 The saint was particularly outstanding in the battle against heresies, especially against “pseudonymous knowledge” [Gnosticism], which spread from Asia Minor to all the large centres of population in the empire and led many people astray with the arcane nature of its dogmas. The struggle against the Gnostics allowed the saintly bishop to expound Christian dogma in a superb manner. He first showed that the “knowledge” which Gnostics sought vainly in mythical narratives and the complex constructs of their warped minds is, in fact, the sublime gift of love, which the Holy Spirit grants to every Christian through the living organism of the Church. It is only within the Church that people can drink the pure water, which flows from Christ’s pierced side, in order to receive eternal life. All other dogmas are no more than broken cisterns [see Jer. 2, 13: “For my people…have forsaken me the source of the water of life and have hewn out for themselves broken cisterns which will not be able to hold water”. The verse is used at Lauds on Great Friday]. And the really knowledgeable people are not those who reject and disdain the body in order to worship a “God beyond conception” and His “demiurge” but rather the “spiritual” people who have received from the Holy Spirit the pledge of the resurrection of the flesh and of incorruption. Far removed from the Greek diarchy of body and soul, Saint Irenaeus propounded the Johannine dogma of the Incarnate Word in order to interpret the meaning of our destined goal. The first Adam was made from clay by God’s two hands: the Word and the Spirit. He was made in the image of God, in accordance with the model of the glorious flesh of Christ, and was given the breath of life in order to progress from being the image of, to being the likeness of God. When he had been deceived by the covetous devil, losing his privileges and falling into death, he was not abandoned by God, Whose eternal plan was to make him a sharer in His glory. The revelations and prophecies of the Old Testament and, in particular, the incarnation of the Word, His death, His resurrection and His glorious ascension, are the necessary stages of this dispensation of the Saviour. With a view to the final purpose for which humankind was made, the Word became flesh, “recapitulating” in Himself the first Adam. Just as the first person was born from virgin soil, and, through the virgin Eve’s disobedience, fell into sin through the tree of life, Christ came into the world through the obedience of the Virgin Mary and was crucified on the tree of the Cross. “He gave His soul for our soul and His flesh for our flesh and poured out the Spirit of the Father for the union and communion of God and people, by the descent of God to us through the Holy Spirit and the elevation of humankind towards God through the incarnation of His Word”.

The Word of God, Who created the world, arranging it in an invisible manner in the form of a Cross, became visible at a particular time upon the Cross, with the aim of gathering unto Himself all beings who were dispersed and bringing them to knowledge of God. Appearing, not in His ineffable glory, but as a person, He showed in this form the restored image of God, orientated once again towards likeness. And he nursed us “at the breast of His flesh”, in order to accustom us to the food and drink of the Word of God, so that strengthened by the “bread of immortality” we would be able to approach the vision of God, Who grants immortality. “It’s impossible for us to live without life and there’s no life except through participation in God. And this participation consists in our seeing God and enjoying His goodness… Because a living human person is the glory of God and the life of the person is the vision of God”. 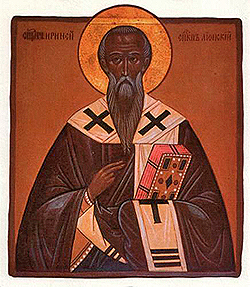 For Irenaeus, a disciple of those who knew the Apostles, real knowledge is the love and glorification of the human being in the Person of Christ the Saviour. Much more than a mere defeat of “pseudonymous knowledge”, his theology, wonderful in its simplicity and depth, contains the seeds of everything the later Fathers would expound in their God-inspired writings.

After his peace-making intervention to Pope Victor, Saint Irenaeus continued to work for the stabilization of the Church. It is reported that he was martyred during the persecution of Septimus Severus, in about 202, but no details have been preserved regarding the conditions of his death. His body was laid in the crypt of the church of Saint John- which later was given his own name- between the graves of the holy martyrs Epipodos and Alexandros.